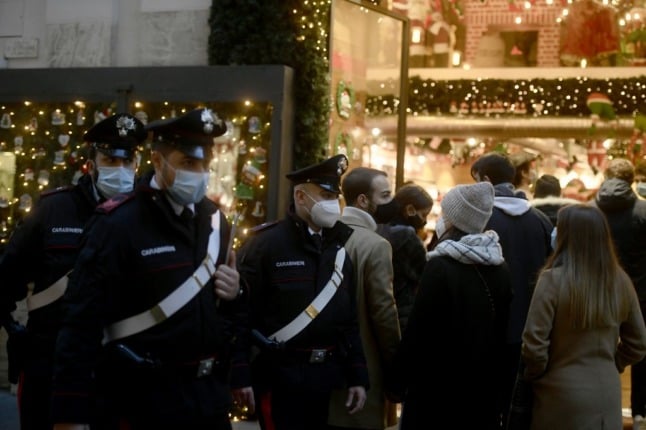 The Italian government has approved a draft decree on Tuesday which would extend the current state of emergency until March 31st, 2022.

While the draft could yet be amended, the legislation would mean an extension to current rules on the use of the ‘green pass’ health certificate and the country’s four-tiered system of health measures with regions classified as white, yellow, orange and red risk zones.

The government is also expected to announce a new quarantine requirement for all unvaccinated travellers entering Italy, including those coming from within Europe, according to reports from state broadcaster Rai.

Under current rules, proof of a negative test result is sufficient for quarantine-free travel to Italy.

With Europe in the grip of a coronavirus fourth wave, Italy has in recent weeks issued a raft of stricter health measures aimed at stemming rising infection and hospitalisation rates in the country.

Until now, government ministers had appeared reluctant to state whether and for how long the state of emergency could be extended into 2022, though it has long been clear that doing so would be necessary in order to keep the current rules in place.

But Italian Prime Minister Mario Draghi decided to “speed up” the decision, news agency Ansa reported, “to give a clear signal of the priorities relating to the pandemic.”

What is the state of emergency?

Though declaring a ‘state of emergency’ may sound dramatic, in practice it is done in order to ease bureaucracy and allow local and national governments to pass laws quickly in response to a fast-changing situation.

Known as the stato di emergenza in Italian, the declaration of emergency status gives more power to the government and regional authorities to make changes rapidly in response to a constantly changing health situation.

It’s not the same thing as an emergency decree, or DPCM (Decreto del Presidente del Consiglio dei Ministri, or a prime minister’s decree) but rather the condition needed for these emergency laws to be passed.

The introduction of rules requiring the use of face masks and the Italian Covid health certificate or ‘green pass’, for example, would have normally required a lengthy parliamentary process.

If the state of emergency were to end as currently scheduled on December 31st, these rules would cease to be valid.

How long will it be extended for?

While the final decree text is yet to be signed into law, the draft currently in circulation states that the state of emergency will be extended for three months – until March 31st, 2022.

The measure has already been in place for almost 23 months in total. It was first introduced on January 31st 2020, as the first cases of coronavirus were detected in Rome.

Initially, it had a timescale of six months but it has been rolled over several times amid the continuing pandemic.

There had been doubts about whether the government could declare a a three-month extension, as Italian law states that a national state of emergency cannot be declared for more than 12 months at a time and can only be extended for a maximum of 12 months beyond that, making two years in total.

Italian Prime Minister Mario Draghi and Health Minister Roberto Speranza continue to favour a cautious approach to dealing with the pandemic, with the country now relying heavily on the use of the ‘green pass’ system as well as vaccinations in order to keep infection rates under control this winter.

Draghi’s cabinet continues to draw on the advice of the Covid-19 emergency commission and scientific advisory panel (the Comitato tecnic o scientifico or CTS) – which was set up under the state of emergency rules early on in the pandemic.