Pope Francis was referring to “the great number of women who are beaten, abused at home, even by their husbands,” in comments to TG5 during a special programme broadcast Sunday evening.

Cases of domestic violence soared during the lockdowns imposed to try to stem the spread of the coronavirus in Italy.

According to a recent report from Italy’s national statistics agency Istat, more than 15,000 women sought help from the country’s anti-violence centres, or Cavs, in 2020.

More than 90 percent (approximately 13,700) were first-time users of the service.

Compared to the same period in 2019, the first nine months of 2020 saw a significant increase in the number of reports of domestic violence from women who feared threats to their own life or that of a loved one (3,583 versus 2,663), the report said.

However, for 74.2 percent of the women who sought help from Cavs over the course of 2020 (approximately 7,700 individuals), the violence did not originate with the pandemic but was pre-existing.

40.6 percent had experienced violence for more than five years, and 33.5 percent for between one and five years.

Since January 2021, 112 women have been killed in Italy, according to interior ministry figures. More than half of the murders were perpetrated by a current or former partner.

In his interview on Sunday, Pope Francis was filmed talking to people including a survivor of domestic abuse. They discussed issues such as violence, poverty and the fallout from the pandemic, AFP reports.

“It’s a problem which, to my eyes, is almost satanic,” he told one of his interlocutors, a woman who with her children had had to flee her violent husband.

“Because it is taking advantage of the weakness of someone who can’t defend themselves.”

Comparing the suffering of abused women with that of Mary, the mother of Christ, who had to witness his crucifixion, he argued that she had never lost her dignity.

Advising the woman to draw strength from that example, he told her: “I see a lot of dignity in you, for if you had lost your dignity, you wouldn’t be here.”

Pope Francis has on several occasions denounced violence against women, last year comparing it to a “profanation”. 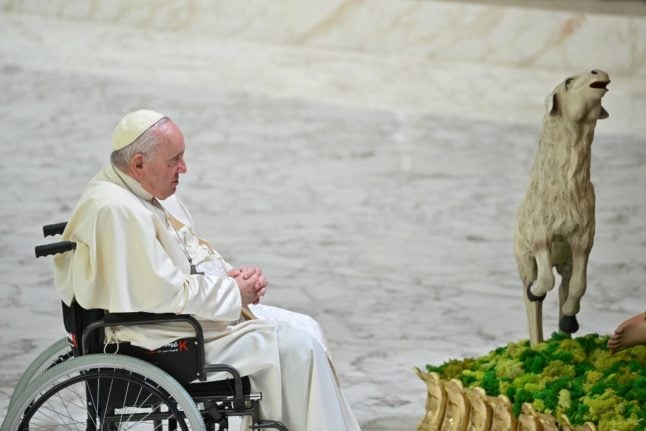 Francis — who turned 86 on Saturday — has said in the past that he would step down from the papacy should health problems keep him from his duties.

In Spanish newspaper ABC, the pontiff said he signed his resignation letter and handed it over to the Vatican’s secretary of state, Tarcisio Bertone, before that cardinal’s retirement in 2013.

“I signed the resignation and I told him, ‘In case of medical impediment or whatever, here’s my resignation. You have it’,” the pope said.

Asked by the interviewer whether he wanted that fact to be known, Francis replied: “That’s why I’m telling you.”

He added that he didn’t know what Bertone subsequently did with the letter.

Francis has been limited in his ability to walk by an inoperable knee condition which has forced him to rely on a wheelchair in recent months.

The pope has had to cancel or curtail activities several times over the past year because of pain and, in an interview in July, he acknowledged that he needed to slow down.

“I think that at my age and with this limitation, I have to save myself a little bit to be able to serve the Church. Or, alternatively, to think about the possibility of stepping aside,” he said.

CRIME
Italy records sharp rise in femicides over the past year
Url copied to clipboard!