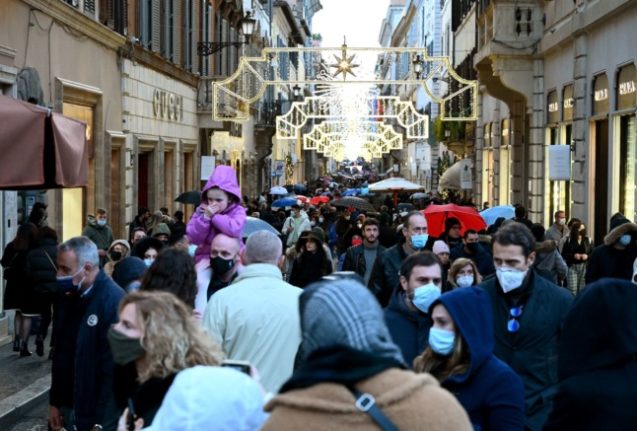 Italy’s council of ministers will meet with regional presidents on Thursday, December 23rd, to discuss measures to be included in a new Covid emergency decree.

Prime Minister Mario Draghi called the meeting due to the continued rise in the rate of new infections and concerns over the spread of the Omicron variant in Europe, reports Italian news daily Corriere della Sera.

Italy recorded 28,632 new Covid cases in 24 hours on Friday – the highest number in over a year – while the national Higher Health Institute (ISS) said on Saturday that it had so far identified 84 Omicron cases, a sharp increase from the 55 announced on Friday.

“There is an element of concern on the part of the government”, Italy’s health minister Roberto Speranza said in a recent interview on talk show Che tempo che fa. “We are discussing and will evaluate possible solutions.”

He urged people in Italy to use “maximum precaution, prudence and avoid gatherings as much as possible during the Christmas holidays” and highlighted the importance of vaccines for five-11-year-olds, booster shots in adults, and the widespread use of masks.

It’s not known if the government will introduce any major new restrictions over the Christmas and New Year holiday period, and the prime minister has said he wants to do everything possible to ensure businesses remain open.

Italian news outlets were speculating on Monday about what these might be – although at this stage, the government has yet to make any official announcements.

One expected change is a new requirement to produce a negative test result, in addition to a reinforced health pass or ‘super green pass’ proving the bearer is vaccinated or recovered from Covid, to enter areas like nightclubs and discos.

Another possible restriction, suggests Corriere, is limiting crowds in shopping centres by introducing a one in, one out nightclub-style system to ensure a maximum capacity is not exceeded; or to require a basic ‘green pass’, showing the holder is vaccinated, recovered, or recently tested negative for Covid in order to enter a shopping centre. On Monday, the regions of Liguria, Marche, Veneto and the autonomous province of Trento lost their low-risk ‘white’ zone status under Italy’s four-tiered system of Covid restrictions under an ordinance signed by Health Minister Roberto Speranza.

The ministry reclassified the four areas as ‘yellow’ zones after they exceeded the maximum thresholds for Covid infection rates, hospitalisations and intensive care admissions according to the latest data from the Higher Health Institute (ISS).

They join Friuli Venezia Giulia, Calabria, and the autonomous province of Bolzano, which were already under ‘yellow’ zone restrictions.

Currently, those with a ‘super green pass’ are able to access all venues and facilities across the country, whether in the least-restricted ‘white’ zones or more restricted ‘yellow’ or ‘orange’ zones, without taking a Covid test.

But with the highly contagious Omicron variant spreading rapidly throughout Europe, it’s feared that vaccination or recovery from Covid alone won’t be enough prevent the spread of infections, particularly where there are large indoor gatherings

Longer term measures are thought to be likely to include the reduction of the validity of a ‘super green pass’ from nine to seven months, and the extension of the ‘super green pass’ requirement from January 15th to March 31, 2022, which is when Italy’s current state of emergency is next set to expire.

In ‘white’ and ‘yellow’ zones (currently the whole country – no region is yet under stricter ‘orange’ or ‘red’ zone restrictions), no health certificate is at present needed to enter shops and shopping centres under national rules.

Regional or city authorities can however impose their own additional measures locally.

Mayors of some major cities have already cancelled some Christmas and new year’s events in an effort to keep their infection rates under control.

In Rome there is no annual Christmas market in Piazza Navona this year, and a New Year’s Eve concert that was due to be held in Circo Massimo, an ancient Roman chariot racing track often used as a modern day outdoor events space, has been cancelled, according to Sky News.

“We had chosen some great Roman artists for the relaunch, a spectacular location in Circo Massimo, and impeccable organization for safety,” the city’s major events councillor Alessandro Onorato told Italian media. “But in this moment our priority is and must be to safeguard the health of Romans and avoid gatherings.”

A New Year’s Eve celebration in Bologna’s Piazza Maggiore has also been cancelled, reports Sky, while Naples’ mayor has imposed a moratorium on street parties in the period between Christmas and the New Year, with the consumption of any food or drink other than water banned in public spaces from December 23rd to January 1st.