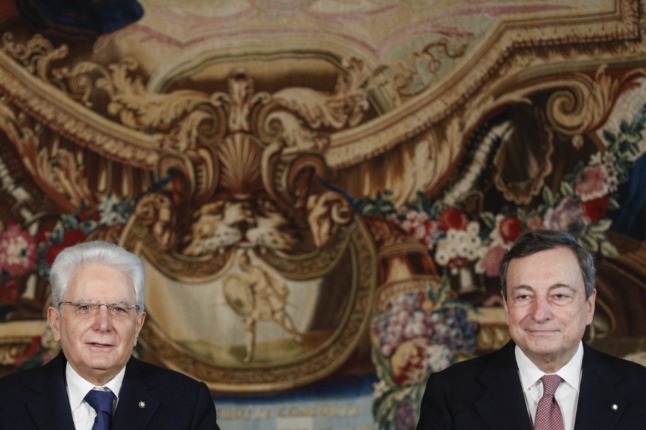 Mattarella's seven-year term is due to end in February 2022. Photo by GUGLIELMO MANGIAPANE / POOL / AFP

With current Italian president Sergio Mattarella’s seven-year term set to expire on February 3rd, voting for the new President of the Republic will be begin on January 24th.

First sworn in on February 3rd 2015, Mattarella has ruled out extending his role for another seven years, despite calls for him to stay on and ensure continuity as the country recovers from the pandemic and implements the national recovery and resilience plan.

“I am old and in a few months I will be able to rest,” Mattarella was reported to have said in May.

This means the vital task of overseeing the implementation of the recovery plan, worth over 222 billion euros and hoped to address long-standing structural issues in Italy, will fall to his successor – but with just a week until voting begins in parliament, there’s no clear favourite to take Mattarella’s place.

The President is not only a figurehead representing the state and national unity, but is responsible for authorising bills to parliament and stepping in to manage Italy’s frequent political crises – in contrast to and while complementing the prime minister’s role of directing the government.

As candidates begin to confirm their bids for presidency, here are some of the figures expected to run for the position – and what their chances are of being elected as the 13th President of the Republic.

The current prime minister is a favourite for election to the ‘Colle‘ (hill) – referring to the highest hill in Rome, on which stands the Palazzo del Quirinale, the seat of the President of the Republic.

Draghi, a former head of the European Central Bank, has refused to be drawn on whether or not he will run for the presidency, making it clear that he feels discussion of his possible candidacy would be disrespectful to the current president. As one of the most likely candidates being named in Italian media, Draghi’s role as prime minister is therefore in question, because – should he be elected as President – who then, would become prime minister?

Called in by Mattarella himself and asked to be the head of a new government following a political crisis in February 2021, Draghi has won favour with the public, with 70 percent of Italians reportedly wanting him to continue as prime minister in a recent survey.

And his political decisions and reforms led to Italy being named ‘country of the year’ for 2021 in a recent international ranking.

Draghi’s face seems to fit the national picture of Italian politics, but if he were elected as president, some politicians believe he could also lead the government for a while too, until a handover has been arranged.

READ ALSO: What will happen if PM Mario Draghi becomes Italy’s next president?

But others, such as previous prime minister Giuseppe Conte, has claimed that Draghi is needed solely as prime minister, to ensure continuity of the national recovery plan.

Draghi is not “fungible”, he is reported to have said by Sky Tg24 news, using a term from the world of economics which means something or someone can’t be interchanged with another. Never before has a woman been elected to the presidency of the Republic. One possible candidate who could break the records could be Marta Cartabia, current Minister of Justice and the first President Emeritus of the Constitutional Court.

She has the potential to take the title, as according to a survey by Termometro Politico, she ranked as third choice at 11.8 percent, behind Mattarella (17.7 percent) and Draghi (16.1 percent).

But what is Marta Cartabia’s relationship with the political forces that could elect her as Head of State in January 2022?

As is the case with elections, political favour also counts in the process of being chosen as President. According to the Italian Constitution, “The President of the Republic shall be elected by Parliament in a joint session of its members.”

“Three delegates from each region, elected by the regional council in such a way as to ensure the representation of minorities, shall take part in the election,” it continues.

So, a potential candidate’s politics can alter the likelihood of being awarded the title of Head of State.

Her name has been reported as having the potential to attract agreement between plenty of parties. Cartabia is said to be appreciated by most of the centre-left forces and has been described as “a profile that represents a point of agreement” for the centre right.

So much so that some speculate that she is aware of her possible election and is keeping a neutral attitude to ingratiate herself with the party that has the relative majority. Pier Ferdinando Casini is a potential candidate that’s been under the radar until now. As the clock ticks on who could become Italy’s next President of the Republic, several Italian media reports have indicated that he could be a contender for the title.

The Bologna-born politician was previously president of the Chamber of Deputies – the lower house of the Parliament of Italy (the other being the Senate).

His political stance is currently centrist – he has been in the centre-right and is now in the centre-left. Now at the age of 66, he is a senator elected in the Democratic Party in the left-wing city of Bologna. He has solid relations with former Christian Democrats colleagues, as well as reportedly being on good terms with parties across the board, from the left to the centre-right, such as Forza Italia.

Whatever favour he gains from political corners, he’s certainly downplaying his potential to take the title of President.

“There is a one in two thousand chance that I might, at some point, be a candidate,” he’s reported to have replied when asked about putting his name on the list. Considered by some as an outsider chance, but as a solid choice by others if eventually elected, is Paolo Gentiloni.

One of Italy’s former prime ministers and also a foreign minister, he’s now EU commissioner for economic affairs, whose possible election would reportedly be influenced by the good relations he has with both Mattarella and Draghi.

According to Il Giornale, “A certain familiarity was created when Gentiloni was at Palazzo Chigi (the government headquarters) and Draghi at the European Central Bank, with almost weekly dinners in the company of their respective wives.”

But he’s not on such cosy terms with all political personalities.

One of the obstacles in his path could be former prime minister whose cabinet he served under and the current leader of Italia Viva, Matteo Renzi, who has reportedly been hostile towards Gentiloni for several years.

Still, he has other supporters in his corner, such as Enrico Letta, the secretary of the Democratic Party, who has said Gentiloni is “first choice” for President.

And Italian politician and member of the European Parliament, Carlo Calenda, has advocated his former colleague Gentiloni, under whose premiership he served as Minister of Economic Development.

Saying that Draghi would be a good choice, but that he’s better placed to continue as prime minister, he stated, “I think Paolo Gentiloni has the right profile, he would be an extraordinary president”.

The controversial former prime minister has not been shy about putting himself forward as a candidate for the job, and Italy’s right-wing parties have agreed to support the former premier in his quest to take the title of President with just one week to go until voting begins in parliament.

85-year-old Berlusconi doesn’t seem ready for retirement and instead has continued to try and deliver on a promise he once made his mother – that he would one day become President of the Republic. Despite his notorious past of sex scandals and falling seriously ill from Covid-19 last year, the billionaire media magnate is unrelenting in his campaign to take the title.

But could he garner enough support to clinch the required two-thirds of votes? Even if nobody reaches that threshold, the winning candidate must at least gain 50 percent of votes plus one.

The media tycoon met with Matteo Salvini of the anti-immigrant League party and Giorgia Meloni of the far-right Brothers of Italy, who have since shown their support for the octogenarian.

But many political figures aren’t convinced he’s the man for the job, so it’s not certain whether he’d get enough backing to step in Mattarella’s shoes.

atic party (PD), has previously expressed how the hypothesis of Berlusconi as President should be taken off the table.

Some media outlets have even campaigned against his candidacy – the Italian national newspaper il Fatto Quotidiano has created a petition to deter members of parliament from voting for him.