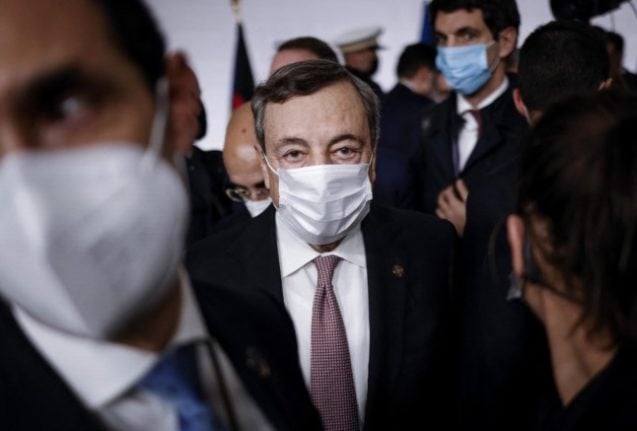 Rome “has achieved all 51 targets” needed to qualify for the next tranche of nearly 200 billion euros ($177 billion) allocated to Italy as part of the EU’s post-virus fund, he said at a press conference.

Brussels has demanded reforms in return for the grants and loans.

Draghi, who has been driving such reforms through parliament in record time, said Rome intended to “radically reform the economy and stimulate productivity, simplify bureaucracy and encourage innovation”.

Rome received its first check in August for 24.9 billion euros from the European Commission — 13 percent of the total funds expected from Brussels over six years.

Reforms demanded by the European Commission and adopted by Italy include an overhaul of the justice system, one of the least efficient in Europe, and a reform aimed at regularizing real estate.

The decision by the top European economies effectively ends months of effort to implement the tax jointly across all 27 member states.

The 15-percent minimum tax was one of two pillars of a major international agreement decided at the OECD and signed by more than 130 countries, including Hungary and the United States.

“Should unanimity not be reached in the next weeks, our governments are fully determined to follow through on our commitment,” the countries said in a joint statement.

“We stand ready to implement the global minimum effective taxation in 2023 and by any possible legal means,” the countries added.

French Finance Minister Bruno Le Maire, who initiated the joint text, said that “tax justice must be a priority for the European Union”.

“We will put in place minimum taxation from 2023, either through the European route or through the national route,” said Le Maire.

Christian Lindner, his German counterpart, said Germany will “if necessary” adopt the tax “independently of an agreement at the European level”.

The EU’s original ambition was that the 27-member bloc would be the first jurisdiction to implement the OECD-brokered agreement. The bloc-wide plan needed the vote of all EU countries in order to pass.

The resistance by Hungary came as the relationship with its EU partners remained fraught, with Budapest along with Warsaw seen as steering away from the bloc’s democratic values.

The Hungarian veto of the minimum tax is seen by many in Brussels as a means of pressure to obtain the release of seven billion euros ($7.3 billion) in grants planned under the European pandemic recovery plan.

Poland’s acceptance of the minimum tax came after Brussels accepted Warsaw’s recovery plan, which should see it receive 36 billion euros in grants and loans over the next several years.