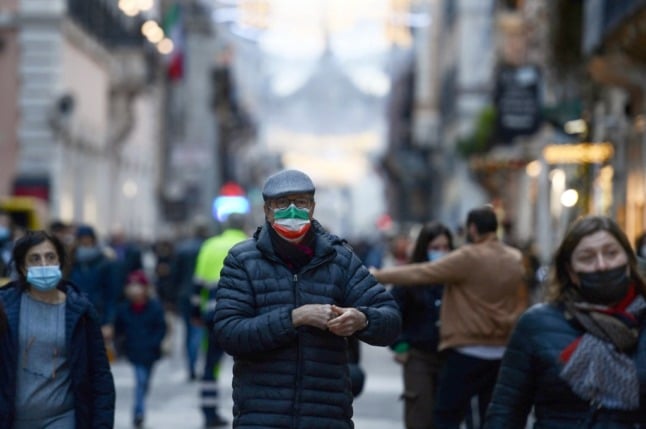 Stricter rules on wearing masks outdoors in Italy are among the changes coming in under a new decree. Photo: Filippo Monteforte/AFP

Italy’s government on Thursday night unanimously approved stricter rules on the use of health passes and masks under a decree expected to come into force in the next few days.

Outdoor public events and parties are to be temporarily banned during the festive season, Health Minister Roberto Speranza confirmed, after many local authorities chose to cancel Christmas and New Year’s Eve events in towns and cities across the country.

The decree will also further cut the required period of time between completion of the initial vaccination cycle and administration of a third or booster dose from five to four months, Speranza stated in a televised press conference on Thursday night.

“In this difficult phase – just look at the numbers not only here but also in the rest of Europe – we are implementing measures that we think will give greater protection to our fellow citizens and for the healthcare system,” said Speranza.

“The vaccine is and remains a fundamental weapon. It also gives those who encounter the virus less chance of going to hospital and of a fatal outcome,” he continued.

Speranza did not state when the new decree would come into force, but said it would cover the period until January 31st – with several measures only in place until New Year’s Eve.

These include the ban on outdoor public gatherings, parties and events until December 31st, and a temporary extension of green pass rules to bars and restaurants over the festive period, including for counter service. Currently, ordering and consuming food and drinks at the bar or counter is allowed without any green pass restrictions.

Nightclubs and dance venues will be closed until January 31st, Speranza said.

The validity of the ‘green pass’ health certificate is to be cut from nine months to six, and the reinforced or ‘super’ green pass proving vaccination or recovery will become a requirement in more venues, including museums.

Italy will bring back the requirement to wear masks in all outdoor public places, as well as indoors. FFP2 masks will become a requirement on public transport.

Travel rules for international arrivals to Italy do not appear to be affected by the new decree.

The government had also discussed the possibility of extending the vaccination mandate to more state employees but this change was not approved, according to Italian media reports on Thursday evening.

A vaccine obligation was extended to teachers, police and emergency services workers on December 15th and has applied to all healthcare workers since April.

The new decree was announced as Italy recorded its highest-ever daily number of coronavirus cases on Thursday – 44.595 in the past 24 hours, a sharp increase from the 36.293 cases reported on Wednesday.

The previous highest daily number of infections was 40,902 recorded on November 12th, 2020.

The Omicron variant is known to be behind 28 percent of the infections recorded in Italy, or more than one in four, Italy’s Higher Health Institute (ISS) said on Thursday.

Franco Locatelli, head of the government’s CTS health advisory panel and president of the Higher Health Institute (ISS), said at the press conference on Thursday that “Omicron is five times more contagious” than other coronavirus variants and urged the public to “get vaccinated’.