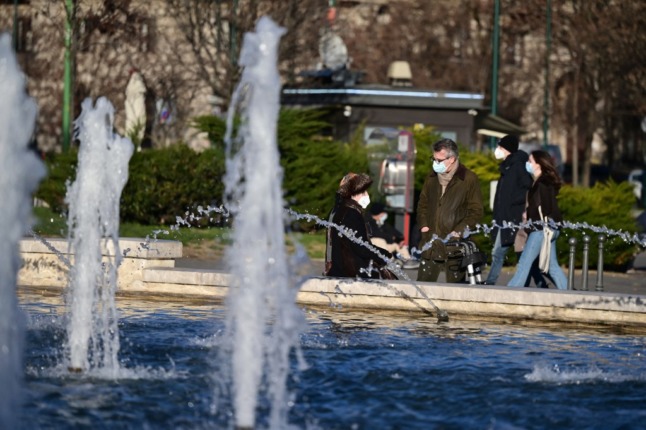 There are currently over 2 million positive cases in Italy, while numbers continue to grow with over 100,000 new infections recorded on Monday.

As most of Italy’s regions and autonomous provinces have now lost their lowest-risk ‘white’ zone classification, with 15 now classed as ‘yellow’ zones, some are on the brink of tighter restrictions again and risk turning ‘orange’.

READ ALSO: What changes about life in Italy in January 2022

Four regions looked close to the mark last week, but their health data hadn’t worsened significantly enough by Friday, when Italy’s health ministry reviews the latest figures and decides which restrictions should be applied to each area from the following Monday.

To move into an ‘orange’ zone, a region or autonomous province must record a Covid incidence rate of 150 cases per 100,000 inhabitants, combined with 20 percent ICU and 30 percent general ward Covid patient occupancy.

There can be some flexibility on these parameters, however, as the government has discretionary powers to place an area into a higher restriction tier even if the thresholds aren’t exceeded. Likewise, a region could keep its lower tier status when they have, but it provides an overall guide of how an area is faring.

Here’s a map of the regions that could become ‘orange’ over the coming weeks. The ‘yellow’ and ‘white’ zones are current and show regions less likely to move into the higher restricted category.

Calabria has already met the threshold with 20 percent ICU admissions and 38 percent for ordinary Covid patients.

The numbers are constantly growing in Sicily and this region could also face tighter health measures from as soon as next Monday. As things stand on Wednesday, its ICU occupancy is 20 percent, while general admissions are 32 percent. Its incidence rate is 435.15.

Liguria, meanwhile, has met the threshold of 20 percent ICU occupancy and has stabilised at this figure for a few days. It has exceeded the quota for general Covid admissions at 38 percent.

Friuli-Venezia Giulia could also become an ‘orange’ zone this month, with its current 23 percent ICU occupancy already exceeding this threshold and 28 percent ordinary admissions approaching it.

Meanwhile, Marche is nudging further towards the parameters for an ‘orange’ zone, with 22 percent ICU occupancy and 25 percent ordinary hospital admissions.

The autonomous province of Trento is experiencing high ICU occupancy at 30 percent currently, meaning it could become ‘orange’ in the next few weeks. Its general Covid patients are still under at 21 percent though.

Valle d’Aosta still has some room before it hits the ICU threshold with 18 percent occupancy, but its general admissions have far exceeded the parameters at 46 percent.

Should these regions become ‘orange’ zones, little will change for vaccinated people, as most venues and activities will remain open and accessible to those with Italy’s ‘super green pass’ health certificate that shows the bearer is vaccinated against or recovered from Covid.

From January 10th, the ‘super green pass’ is required to access all public transport and most leisure venues across the country including in ‘white’ zones, effectively meaning a nationwide lockdown for those who are unvaccinated (or aren’t recovered from Covid).

Local authorities can decide to impose stricter rules at short notice. Always check the latest restrictions in your province or town: find out how here.