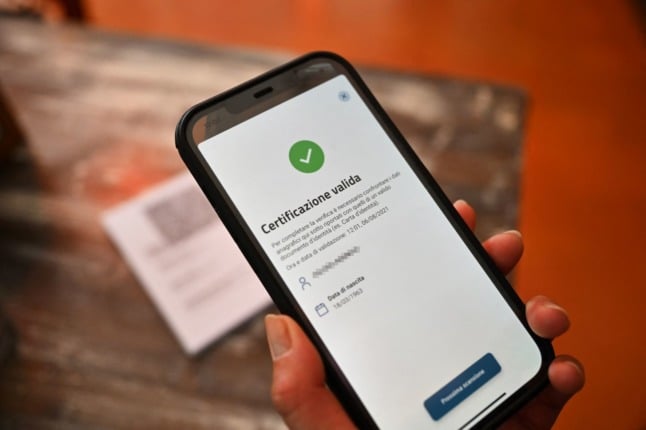 Prime Minister Mario Draghi signed a new decree confirming the rules on Friday morning, Sky TG24 reports, after a week of drawn-out discussion between the national government and regional leaders.

Exempt businesses include supermarkets and food shops, pharmacies, opticians, and shops selling fuel and animal food, according to media reports on Friday.

The decree text reportedly states that the exemption applies to shops “related to essential and primary needs”,

The full text of the decree is yet to be published, and it remains unclear whether tobacconists and newsagents are covered by the exemption. (This article will be updated when more information becomes available.)

From February 1st, those who are not vaccinated or recovered will be able to enter other shops only with a ‘basic’ version of the country’s green pass health certificate, which can be obtained via testing.

Italy currently has a two-tiered green pass system in place, with the basic version of the pass available to those who test negative, alongside the ‘reinforced’ or ‘super’ green pass which proves the bearer is vaccinated against or has recovered from Covid-19.

Passes based on rapid tests are valid for 48 hours, while PCR or molecular test results produce a pass that remains valid for 72 hours.

As of January 20th, the basic version of the pass is already a requirement for entry to hairdressers, barbers, and beauty salons.

The same requirement will apply to public offices, banks and post offices from February 1st.

Friday’s decree clarifies that the pass will not be required at police stations when filing complaints, or at shops and services “supplying drugs and medical devices” or to “healthcare services, including veterinary ones, for all purposes of prevention, diagnosis and treatment,” including for carers.

Owners or managers of the shops and offices in question will reportedly be tasked with ensuring compliance, “including with the use of random checks”. Businesses found not to be enforcing green pass requirements can face fines of up to 1,000 euros.

Many other businesses and services in Italy already require the ‘reinforced’ version of the green pass proving vaccination or recovery, including bars, hotels and all forms of public transport, under rules tightened on January 10th.

The requirement is set to remain in place until at least March 31st, which is the current expiry date for Italy’s state of emergency.

The rules apply nationwide, regardless of the zone a region is in under Italy’s four-tiered system of risk classifications.

Under the new decree, the Italian government was also expected to “reconsider” the system of white, yellow, orange and red ‘zones’, which has been in place since November 2020.

There have been growing calls for the tiered system to be altered or scrapped altogether as the government’s strategy for dealing with the pandemic relies increasingly on vaccination rather than business closures and lockdown measures.

However there was no mention of any incoming changes to the system as of Friday morning.

President of the Lombardy Region Attilio Fontana on Friday suggested a conference between regional heads ad the government would be held next week instead, adding that the zone system “is a little out of date”

“It was useful at a certain stage and now I think it needs to be modified,” he said. “The virus and its way of expanding are different, and the situation of citizens, who are largely vaccinated, is different. We must try to adapt to the new situation.”

For the moment, the system remains in place with four more regions – Abruzzo, Friuli Venezia Giulia, Piedmont and Sicily – expected to be declared higher-risk ‘orange’ zones from Monday, according to media reports based on the latest weekly health data.