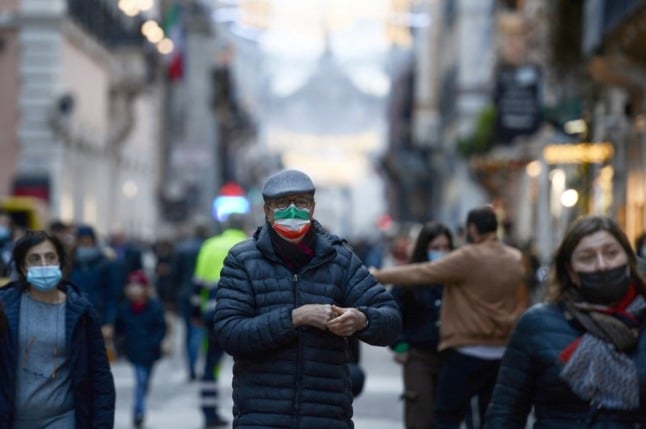 **Note: This article is no longer being updated. For the latest news on changes to Italy’s health restrictions, please click here.**

Two sets of announcements are expected this week aimed at “extending the expiring measures and putting the rest in order”, reports the Ansa news agency on Monday,

Meetings will be held on Monday to decide on changes including the future of Italy’s coloured ‘zone’ system and the duration of the ‘super’ green pass for those who have had a booster shot, with updates aimed at “simplifying the rules and starting a process that should lead to a normalisation of life in Italy”, Ansa writes.

A cabinet meeting is scheduled to begin at 3pm local time on Monday, at which the government will review expiring rules including those requiring masks to be worn in outdoor public areas in Italy’s low.risk ‘white’ zones, and a ban on outdoor parties and concerts and closing nightclubs and dance venues.

These rules, which are set to expire on Monday, appear likely to be extended for at least two weeks according to Italian media reports.

Incoming rules planned to come into force from Tuesday, February 1st, will also be reviewed at the meeting.

This includes possible changes to the planned cut to the validity of Italy’s vaccine pass or ‘super’ green pass from nine to six months from Tuesday, amid concerns about how it will impact those who have already had a third or booster dose.

Those who had their booster early could see their pass expire in the coming days or weeks – an issue which primarily affects healthcare workers, who were among the first to be vaccinated with a third dose from September.

There is also widespread concern that the rule change will prove problematic for foreign tourists from countries which began administering booster shots earlier than Italy, such as the US.

This would be a serious problem in Italy, where a valid ‘super’ green pass or vaccine pass is now a necessity for many aspects of everyday life in Italy, as it has been made a requirement for access to everything from public transport to restaurants and hotels.

WIth no fourth dose available, the Italian government is now reconsidering the cut to validity according to Italian media reports.

It looks likely that ministers will decide to either keep the validity period at nine months, or even to extend it indefinitely for those who have had a booster. The six-month deadline is therefore expected only to apply to those who have had two shots, and the health ministry has been urging people to book their third dose ahead of the rule change.

At this point however, no changes have been officially confirmed.

Before a decision can be made on Monday, the government needs the green light from its panel of scientific experts, the comitato tecnico scientifico (CTS).

The government will also discuss new changes, some of which are expected to come into effect immediately while others will be included in a new decree expected on Thursday, reports Ansa.

These include long-discussed changes to the country’s four-tiered system of coronavirus risk ‘zones’, which was not updated this week and looks increasingly likely to be scrapped.

Ministers are also expected to take steps to simplify the “cacophony” of rules on managing the health situation in schools in Italy, which Ansa says “is creating difficulties not only for the school system but also for millions of families”.

What about Italy’s travel rules?

Italy’s current rules for international arrivals, which are managed separately, are to be extended according to an update on the Italian foreign ministry’s Viaggiare Sicuri (Travel Safe) website.

The rules on travel from non-EU countries are to be extended for an additional six weeks until March 15th, while the government has confirmed it will simplify requirements for arrivals from within the EU.

No further changes are expected as discussions on Monday are likely to be about domestic health measures only.