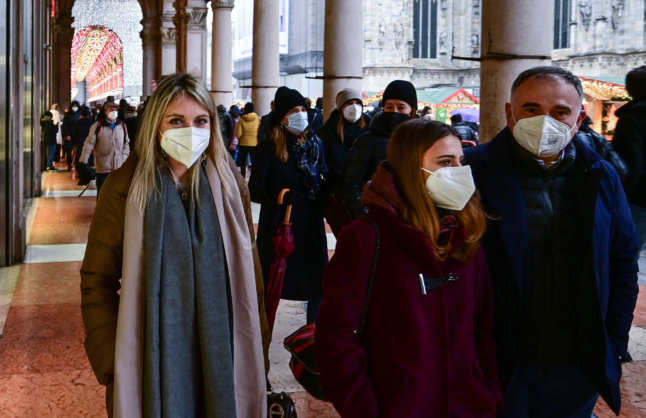 Following an agreement reached by ministers on Monday afternoon, the country’s outdoor mask mandate will now be extended until at least February 10th, according to a report in the Il Messaggero newspaper citing unnamed government sources.

Nightclubs and dance bars, which had been due to reopen from the start of February, will remain closed until the same date, reports news agency Ansa.

The decision was reportedly approved at a cabinet meeting held on Monday afternoon with the intention of reviewing the expiring rules.

These included the requirement to wear masks outdoors in Italy’s lowest-risk ‘white’ zones, as well as a ban on outdoor parties, nightclubs and dance venues that was introduced shortly before Christmas in an effort to battle the country’s soaring infection rates.

Italian news outlets had widely predicted that the rules would be extended for at least another two weeks.

As of Monday evening, there were no reported changes to incoming rules scheduled to enter into force from February 1st, some of which had also been up for review at the same cabinet meeting.

These include a reduction in the validity of Italy’s ‘super green pass’ Covid health certificate, which is now required to access most services and venues in the country, from nine to six months.

Those who had their booster early could see their pass expire in the coming days or weeks – an issue which primarily affects healthcare workers, who were among the first to be vaccinated with a third dose from September.

The apparent absence of any such extension also raises questions about how the new rules will affect foreign tourists from countries which began administering booster shots earlier than Italy, such as the US.

With no fourth dose available, the Italian government is reportedly reconsidering the cut to validity..

It looks likely that ministers will decide to either keep the validity period at nine months, or even to extend it indefinitely for those who have had a booster, according to reports in Italian media on Monday.

The ‘super green pass’, or its equivalent in the form of a foreign-issued vaccination certificate, is currently required to use public transport, enter hotels and restaurants, access tourist and cultural sites, or to go to the cinema, sports stadiums, or concerts.

Other items still up for review include long-discussed changes to the country’s four-tiered system of coronavirus risk ‘zones’, which was not updated this week and looks increasingly likely to be scrapped; and steps to simplify the “cacophony” of rules on managing the health situation in schools in Italy, which Ansa says “is creating difficulties not only for the school system but also for millions of families”.

The government is expected to hold discussions throughout this week before publishing a new decree containing further changes on Thursday.