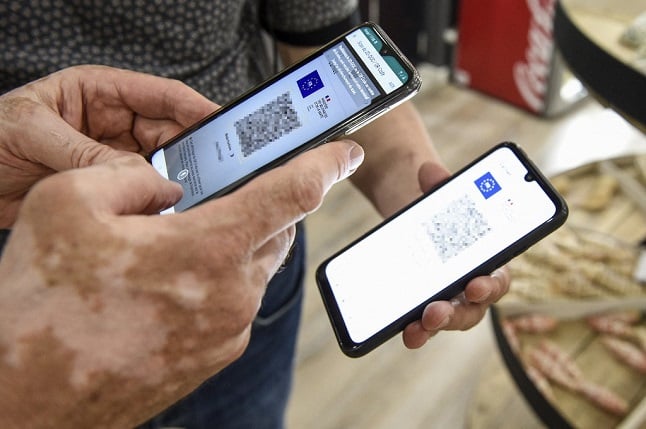 A recent cut to the validity of vaccine passes in Italy will not apply to those who have had a booster. Photo: JEAN-CHRISTOPHE VERHAEGEN / AFP

“The validity of the green pass will become unlimited for those who have had three doses – or two doses and have already had Covid-19”, read a tweet from the prime minister’s office following the conclusion of a cabinet meeting on Wednesday night.

A press release issued later on Wednesday night clarified that this applies “after the completion of the primary vaccination cycle” – therefore also to people who have had the one-shot Johnson & Johnson vaccine.

The six-month validity period of Italy’s ‘super’ or ‘reinforced’ green pass introduced on Tuesday, February 1st, will now only apply to passes issued based on two vaccine doses.

The rule change will be introduced within a new decree which will also scrap restrictions under the four-tiered ‘zone’ system, including ‘red zones’, for those who are vaccinated, the prime minister’s office said.

The decree also relaxed the rules on using Italy’s domestic ‘green pass’ for visitors, amid concerns that the country’s tight rules on showing proof of vaccination would impact the restart of tourism

Travellers from countries with different vaccination rules than Italy, and who are therefore unable to show valid proof of vaccination, will now instead be able to use a ‘basic’ green pass – accessible with a negative test result only – to access places such as hotels and restaurants where a vaccination pass was previously required.

So far, Italy recognises proof of full vaccination in any country on par with its own vaccination certificate or ‘super’ green pass, but these must be with a vaccine approved by the European or Italian medicines agency and must meet other criteria to be recognised as valid.

Health passes issued in any other European member state are automatically recognised in Italy.

“Today’s measures go in the direction of an even greater reopening of the country”, Prime Minister Mario Draghi said during the meeting according to reports from national broadcaster Rai.

“In the coming weeks we will continue on this path towards reopening,” he said. “Based on the scientific evidence, and continuing to follow the trend of the epidemiological curve, we will announce a timeline for overcoming the current restrictions”.

The new decree is expected to come into force from February 7th, according to Rai.

The new six-month validity rule was revised just a day after it came into force on Tuesday, amid widespread concern about the impact on those who already had their booster shots almost six months ago

With no fourth dose available, tens of thousands of people who had a booster almost six months ago in Italy risked losing access to workplaces, public transport and much of public life within the next few weeks as their passes were set to become invalid.

Most of those affected would be healthcare workers, who were among the first to be vaccinated with a third dose in Italy from September.

The rule change was also expected to prove problematic for foreign tourists from countries which began administering booster shots earlier than Italy, such as the US.

It is not known how long the Italian green pass system will remain in place for, with the rules only valid under the country’s state of emergency – which is currently set to expire on March 31st, 2022.

The Italian government’s move to cut validity was intended to push more people in the country to get their third or booster jabs within six months after completion of the initial vaccination cycle.

Boosters are available to everyone in Italy aged over 18 from four months after completion of the initial vaccination cycle.

More than 83 percent of the eligible population in Italy has now been vaccinated with a third dose, according to the latest official data on Wednesday.

Find more information about Covid-19 vaccinations in Italy and the green pass system on the Italian health ministry’s website (available in English) and the official green pass website.