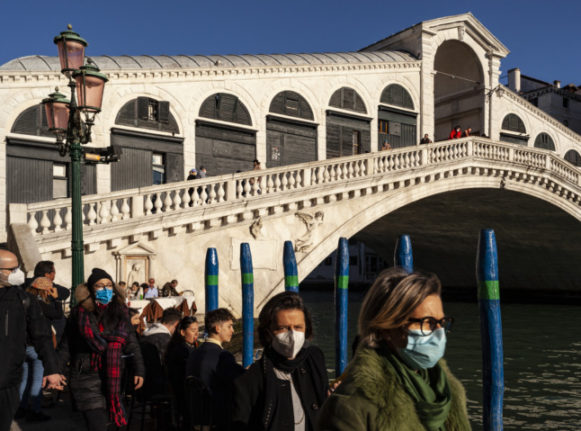 Whether you're going for a jog or just a leisurely walk in Italy, neither situation will require the use of a face mask outdoors anymore. But there are some exceptions to the rule. Photo: Laurent EMMANUEL / AFP

The requirement had been due to expire on January 31st, but Italian Health Minister Roberto Speranza signed an ordinance that same day extending the mandate for an additional ten days.

Masks were first made compulsory outdoors in Italy in October 2020. The rule was then scrapped for six months from late June to December 2021 as Covid infections dropped, but with the spike in Omicron cases this winter the government chose to reintroduce the outdoor mask requirement last Christmas Eve.

A new ordinance signed by Speranza on February 8th confirmed that the outdoor mask restriction would be lifted on Friday, February 11th.

It was initially thought that the easing would apply only to Italy’s least-restricted ‘white’ zones, under the country’s four-tiered system of Covid restrictions; however within a few hours of issuing the ordinance deputy Health Minister Andrea Costa confirmed it would apply throughout the country.

Despite the easing of the restriction, there are still situations in outdoor public settings where everyone over the age of six has to wear a face mask.

When you still have to wear a mask outdoors in Italy:

Meanwhile, Italy still requires the wearing of masks in all indoor public spaces.

This rule applies to everyone in the country except for those categories of people listed as exempt in the January 8th ordinance.

Who is exempt from having to wear a mask indoors and outdoors:

Rules on indoor mask-wearing in Italy remain unchanged, which means that masks are required in all public indoor spaces.

Since December 24th, 2021, high grade FFP2 masks have been required on all public transport in Italy, as well as in cinemas, theatres, live music or entertainment venues, stadiums and sports halls.