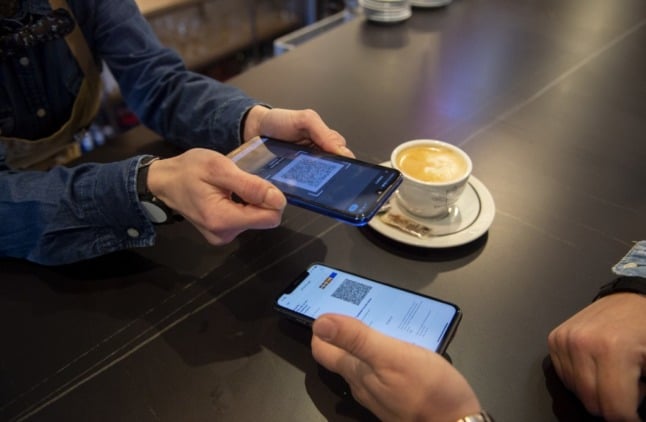 A waiter checks a customer's Covid-19 health pass in a bar. Italy is currently debating the end of some pandemic restrictions, but it’s unclear how long the health pass system will last. Photo: Ander GILLENEA / AFP

This article was updated on March 9th.

As many countries across Europe have recently announced the end of Covid-19 health measures, including mask mandates and the obligation to show proof of vaccination, Italy’s government too has promised to publish a roadmap for easing its own rules.

But over a month since Prime Minister Mario Draghi said on February 7th that a timeline for relaxing certain measures would soon be announced, very little has been confirmed regarding plans for changes to the requirement to show proof of vaccination in Italy.

Since then, Draghi has confirmed that Italy’s Covid state of emergency will end on March 31st, and he said there would be a “gradual” end to the country’s health pass requirement from April 1st. Making this announcement on February 23rd, he indicated that a detailed plan would be published in the next few days.

But so far, further details of the plan are yet to materialise.

Deputy Health Minister Andrea Costa echoed Draghi’s words on Wednesday, telling Rai radio that the government would start easing the green pass rules from April 1st and promising that “a schedule will be set in the next few days”.

Italy currently operates a two-tiered green pass health certificate system, meaning proof of vaccination or recovery is currently needed for access to everything from hotels and restaurants to  public transport and many workplaces in Italy.

Proof of vaccination, recovery or a negative test result is required in order to enter most shops.

This means that even though unvaccinated visitors can enter the country – Italy has allowed people from both EU and non-EU countries to enter with only a negative test result since March 1st – they would face tight restrictions once in the country and find themselves unable to check in to hotel, take a bus, or visit a museum without proof of vaccination (or recovery from Covid-19).

Italy’s other deputy health minister, Pierpaolo Sileri, said last week that he is “in favour of reshaping the ‘super green pass’, gradually, until its abolition not from April 1st but in April,” which is in line with what Draghi indicated last month.

Italian media reports have suggested that the requirement may be gradually removed from certain venues and businesses over a number of weeks from April onwards.

Newspaper Corriere della Sera writes that the government will first remove the green pass obligation for bars and restaurants, and then outdoor sports venues.

Gyms, cinemas, theatres and public transport however are likely to be the last to see the end of the green pass obligation.

However it’s not clear what these reports are based on, as no such plan has been announced by the government.

The system looks unlikely to be removed altogether, as Italy’s health experts have taken a cautious tone when asked about the idea.

Walter Ricciardi, an advisor to Health Minister Roberto Speranza, insisted that the green pass system should stay in place for the rest of this year.

“It is still needed,” Ricciardi said in an interview with Repubblica on Monday. “For all of 2022 the [vaccination] obligation and the green pass must be maintained. We are still in a year of transition.”

He added that by October “we should see if the virus will recur and with what vehemence. It is essential to have the tools that allow us to fight it in the most effective way.”

He urged caution when talking about ending restrictions, saying: “it would be the third time we make the same mistake, the third year in which we think that it’s all over and then we find ourselves with the curve going up.”