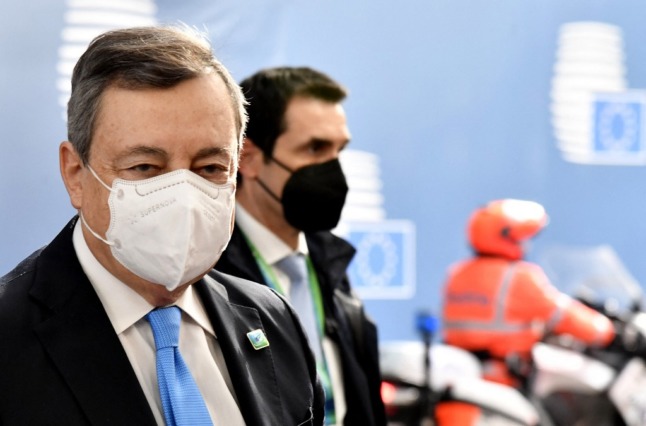 “This is an unacceptable violation of Ukraine’s democratic sovereignty and territorial integrity,” said Draghi as he addressed the Council of State, which oversees administration in Italy.

“I am in constant contact with allies to find a peaceful solution to the crisis and avoid a war in the heart of Europe,” he said.

“The path of dialogue remains essential, but we are already defining within the European Union measures and sanctions against Russia.”

With troops having allegedly crossed the border into Ukraine, there are fears that Putin is paving the way for a wider invasion.

Unlike most of its Western neighbours, Italy has historically relatively friendly ties with Putin, backed by strong, long-standing investments by Italian corporations in Russia.

Putin recently stressed the importance of energy industry ties between Russia and Italy, which is one of the European countries most reliant on imports of natural gas.

But since becoming prime minister in February 2021, Draghi has stressed Italy’s commitments to the EU and NATO.

The leaders of France, Germany and the United States on Monday condemned Russian President Vladimir Putin’s decision to recognise rebel-held areas in east Ukraine as independent, calling it a “clear breach” of the Minsk peace agreements.

The three Western allies also vowed not to let up in their commitment to the territorial integrity and sovereignty of Ukraine.

Praising the restraint shown by Ukrainian President Volodymyr Zelensky over the latest developments, they added that they will “do everything in their powers to prevent a further escalation of the situation”.