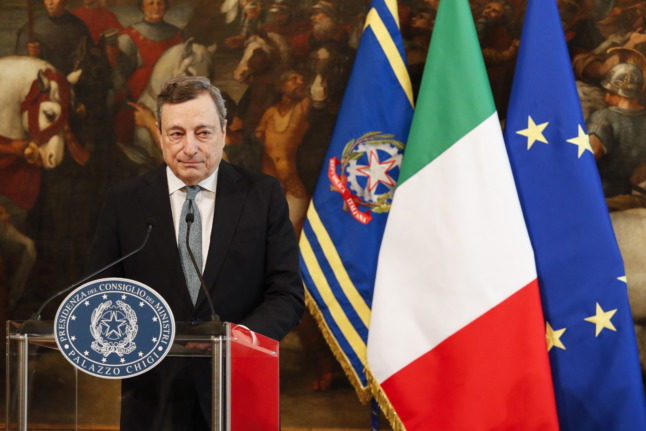 “In particular, I have proposed to take further targeted measures against oligarchs. The idea is to create an international public register of those with assets of more than 10 million euros,” he added.

Italy has already contributed financially towards with the emergency, donating €110 million in financial aid to Kyiv.

Draghi’s speech came after the Italian government on Monday passed an emergency decree containing urgent measures in response to Russia’s invasion of Ukraine.

The government on Monday voted in favour of providing military equipment and materials to Ukraine to assist in its defence against Russia’s invasion.

Cabinet ministers sanctioned “the transfer of military means, material and equipment to the governmental authorities of Ukraine”, a spokesman for Draghi’s office said.

Other measures contained in the decree include the extension of the current state of emergency over the situation in Ukraine, which enables Italy’s parliament to rapidly pass decrees such as this one, until December 31st, 2022; and provisions allowing Italy to revert to coal-based energy sources in the event of gas shortages.
Monday’s decree also reportedly authorises the expansion of reception centres by 13,000 spaces to accommodate the initial anticipated influx of Ukrainian refugees, as well as the establishment of a €500,000 fund to finance scholarships for Ukrainian students, researchers and teachers to attend Italian universities and training institutes.
The state of emergency relating to foreign intervention does not affect the Covid-19-related state of emergency, which is still due to end on March 31st.

Draghi also spoke of the impending refugee crisis as hundreds of thousands of displaced Ukrainians have already fled their homeland and seek protection in neighbouring countries.

“We are working to open special corridors for orphaned children, to allow them to safely reach our country as quickly as possible,” he confirmed.

The prime minister reiterated his country’s stance on providing military assistance and equipment, while reassuring the Italian public that “the government is working non-stop to counter the possible repercussions for our country”.

At the same time, Draghi did not shy away from underscoring Italy’s intention to play an active role in the defence of Ukraine, adding, “Italy does not intend to look the other way.”

On Monday, BIS spokeswoman Jill Forden said it would follow sanctions and not be an avenue for sanctions “to be circumvented”.

Draghi hailed the EU’s “prompt, firm, rapid, strong and above all united” response to the conflict.

“Perhaps Putin saw us as impotent, saw us as divided, as drunk on our own wealth. He was wrong,” the premier said.

“We have been and we will be ready to react, to fight back… to defend our values.”

Draghi repeated his government’s advice that Italians in Kyiv should leave and exercise “maximum caution”.

He said Italian embassy staff had moved to the ambassador’s residence together with a group of Italians, including children.