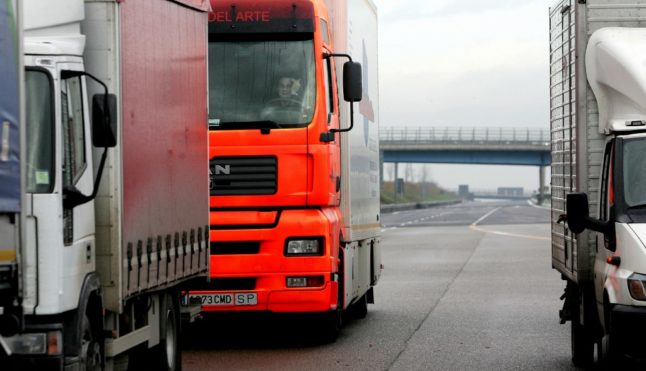 Trucks on a motorway near Rome during a previous nationwide strike against high fuel prices in 2007. Haulage companies are suspending work and organising protests this week over the recent surge in fuel costs. Photo by FILIPPO MONTEFORTE / AFP

Italian haulage industry union Trasportiunito said that the planned action was not a strike, but an “inevitable” suspension of services due to “force majeure” – namely the soaring cost of fuel, according to Italian media reports.

In a letter sent to the government this week, the union said it was coordinating action taken by hauliers who “are no longer able to guarantee contractual obligations” due to fuel prices, reported Italy’s Ansa news agency.

Petrol and gas prices have skyrocketed across Europe since Russia’s invasion of Ukraine, including in Italy.

It is not known how long the suspension might last, but industry associations warned of price rises if the government did not intervene to slash the cost of fuel.

Consumer watchdog Codacons told Ansa the hauliers’ actions would lead to a “surge” in retail prices that would cause further difficulties for households already struggling with the soaring cost of energy.

“The road transport block will have direct effects on the community, suspending the supply of goods to the commercial sector and leading to a surge in retail prices in shops and supermarkets,” said Codacons president Carlo Rienzi.

He said this was “an inevitable consequence, considering that 85 percent of goods sold in Italy are transported by road”.

Rienzi said it was “not clear what the government was waiting for”, calling for it to “immediately cancel VAT on petrol and diesel and reduce excise duties”.

Luigi Barone, of the Italian Federation of Organisations for Consortia and Industrialisation (FICEI), told Euronews on Friday that haulage was among the “numerous energy-intensive companies” that “have slowed down their production due to the disproportionate increase in energy costs.”

“It is clear that the higher costs, unfortunately, will filter to the consumer who will find it a double drain: the doubling of bills will increase the cost of numerous foodstuffs on the shelves,” he said.

Truck drivers are also planning to hold demonstrations around the country on Saturday, March 19th.

Though the demonstrations and stoppages are expected to cause price rises, Italy’s supermarket bosses insisted that there is no immediate threat to supply chains after rumours of a transport blockade of ports in Sardinia reportedly prompted panic-buying on the island this week.

Unions meanwhile stressed that reports of a planned blockade in Sardinia were untrue, saying such a measure would be illegal.

“Blocking basic necessities is a crime, it is not possible to deprive the population of primary goods,” the general secretary of trade union Filt-Cgil, Arnaldo Boeddu, told newspaper Il Messaggero.