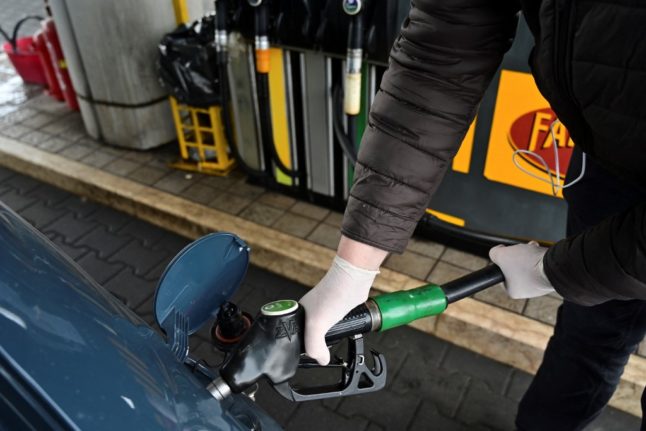 Filling up your tank in Italy is becomig prohibitively expensive as the country sees the highest fuel prices on record in early March 2022. Photo by MIGUEL MEDINA / AFP

The average price at the pump in Italy is now at an average of €2.2 per litre for self-service petrol/gasoline and €2.3 for diesel, according to Italian consumer watchdog Codacons.

This means the price of petrol has risen by 39 percent in a year, and diesel prices have risen by 51 percent, the association said.

Italy’s fuel prices are the highest in Europe after the Netherlands, according to analysis by consumer finance website Facile.it.

Although fuel prices have been on an upward trend in Italy since May 2021, petrol and gas prices have skyrocketed since Russia’s invasion of Ukraine: Russia is the world’s third-largest oil producer and second-largest exporter..

But this doesn’t fully account for the price rises. Other factors affecting the price you’ll pay at the pump in Italy include the 22 percent VAT rate, plus excise duty (a tax on the production and consumption of goods).

Codacons said taxation has now reached 55.3 percent on every litre of petrol and 51.8 percent on diesel.

Representatives of Italy’s business and consumer groups have urged the Italian government to provide financial help to prevent further price rises, as some sectors including hauliers say they can’t afford to operate.

Industry association Confindustria on Monday urged the government to do more to offset the price rises.

“The costs of petrol and diesel at the distributor have reached an all-time high in recent days,” President of Confindustria in the southern Italian city of Brindisi, Gabriele Menotti Lippolis said in a statement to the press.

He said fuel distributors were benefiting from rising prices, “but also the State, which is taking higher tax revenues thanks to the VAT paid on fuel prices.”

“In the last week alone, the extra revenue gained [from VAT] is up by approximately 45 million euros compared to in the second week of February.”

He urged the government to use this money “to support families and businesses” while freezing VAT on fuel “for a few months to immediately reduce prices”.

Though the government hasn’t indicated how it plans to address the increases, Italy’s Minister for the Ecological Transition meanwhile blamed the price surge on speculation.

“There is no technical reason for these increases,” he said, describing it as “a speculative spiral from which a few profit”.