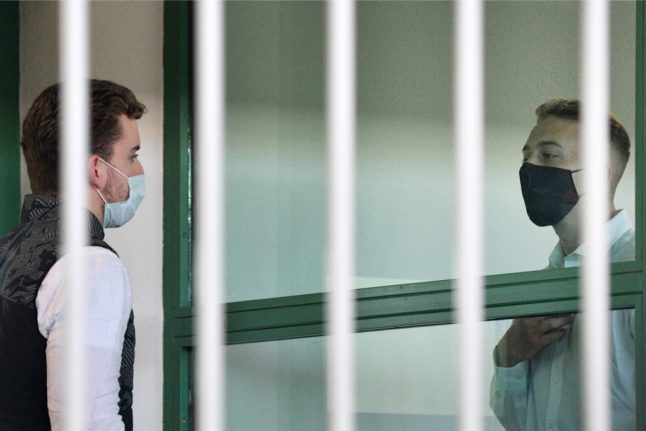 US citizens Gabriel Natale-Hjorth (L) and Finnegan Lee Elder, who are being tried on murder charges after Carabinieri officer Mario Cerciello Rega was killed in July 2019, stand in cells during their trial in Rome (Photo by Tiziana FABI / AFP)

Finnegan Elder and Gabriel Natale-Hjorth were sentenced to life imprisonment in May 2021, for killing policeman Mario Cerciello Rega in a drugs bust gone wrong two years earlier. They were aged 19 and 18 at the time.

Following an appeal, their sentences were reduced Thursday to 24 years behind bars for Elder, who wielded the weapon, and 22 years for Natale-Hjorth.

Their life sentences would have meant at least 26 years in jail.

“Scrapping the life sentences was the right thing to do, but it’s not enough,” Elder’s lawyer Roberto Capra told AFP.

“We proved the defence’s version of the facts to be flawed, and we’ll appeal again.”

Elder admits to stabbing Cerciello with an 11-inch knife on a dark street in the Italian capital, but says he acted in self-defence after believing he was being attacked by dangerous drug dealers.

The prosecution says the officers were in plain clothes but identified themselves as police.

Deputy Prosecutor Vincenzo Saveriano called in February for the appeals court to uphold the life sentence for Elder, describing the crime as an act “of extreme cruelty”.

But he asked to lower the sentence of Natale-Hjorth, who hid the weapon after the attack but played no part in stabbing Cerciello.

At the moment the fatal stabbing took place, Natale-Hjorth had been tussling on the ground with Cerciello’s partner Andrea Varriale — the prosecution’s star witness.

Elder’s father was in court for the verdict, along with Natale-Hjorth’s uncle.

The murder of Cerciello, who was newly married, scandalised Italy while also raising doubts about police conduct.

Lawyers for the Americans had sharply criticised the life sentences — Italy’s stiffest penalty — saying they were harsher than many given for premeditated killings by mafia members.

The evening of the attack began with a botched attempt by the Americans to buy drugs.

They later went to meet someone they expected to be a go-between on the failed deal — but police showed up instead.

Varriale testified that the two teens set upon him and Cerciello immediately after the officers showed their badges, an account the defendants deny.

“We were expecting a drug dealer,” Elder was quoted as saying in a  statement by his lawyers this month.

There was no way I could have known he was a police officer: in street clothes, unarmed and without a badge.”

The defence says the first instance court ignored substantial evidence that the then-teenagers’ version of events was correct, and insists police protocol was repeatedly broken.

The court, Capra said last week, had refused to question the “credibility and behaviour of a law enforcement officer” — despite inconsistencies in Varriale’s story.

Elder stabbed Cerciello in an instinctive response to the “blocking technique” used by Cerciello, who “pinned him to the ground, exerting pressure on his neck and blocking his airway,” Capra said.

The prosecution said Cerciello had been wounded 11 times in a frenzied 20 seconds.

Deputy Prosecutor Saveriano acknowledged Varriale had admitted lying following the attack, but said it was “a big leap” to then consider him an unreliable witness.