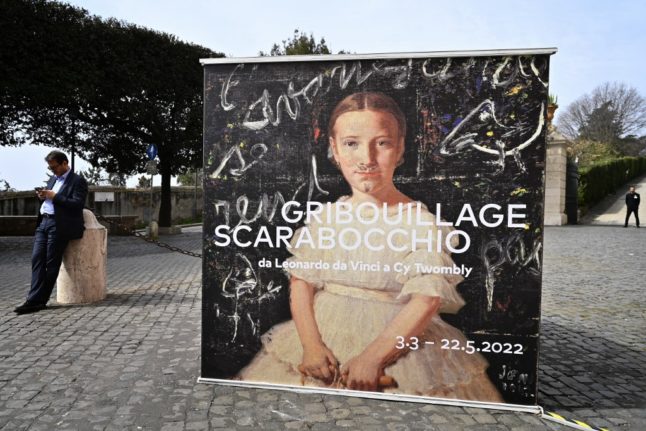 A visitor stands by the poster of the exhibition "Scribbling and Doodling: From Leonardo da Vinci to Cy Twombly" (Gribouillage - Scarabocchio. Da Leonardo da Vinci a Cy Twombly) on March 17, 2022 outside the Villa Medici, The French Academy in Rome. - (Photo by Alberto PIZZOLI / AFP)

Rome’s Villa Medici is showcasing this long-ignored facet of artistic production in a new exhibition spanning the period from the Renaissance to the present day.

Entitled “Scribbling and Doodling – From Leonardo da Vinci to Cy Twombly”, the unusual collection of nearly 300 original works ranges from playful and whimsical to transgressive and political.

It brings to light delightful discoveries never intended for the public eye — with some even in the most unexpected of places.

The wooden panels of the majestic “Triptych of the Madonna” by Giovanni Bellini conceal a world of drawings on the back “that have nothing to do with the front”, Francesca Alberti, one of the show’s curators, told AFP.

On close observation, one can distinguish overlapping figures sketched onto the raw wood, one wearing a bishop’s mitre and grimacing grotesquely.

“What we show in this exhibition is a whole series of drawings where the artist’s hand has been liberated.”

Whether on the walls of artists’ workshops, underneath frescoes or in the margins of other drawings, the doodles and sketches include out-of-proportion figures, crude renditions of heads and bodies, comical caricatures and wobbly lines, scribbles and hatchings.

These “experimental, transgressive, regressive or liberating graphic gestures”, as the catalogue describes them, are not subject to the rules and constraints of academic art and call to mind children’s doodles.

“It took me a lifetime to learn to draw like them,” Pablo Picasso said of the freshness and creativity of children’s art.

Less rigid and more spontaneous, the works represent the hidden side of the artists’ talent, plunging the visitor into the heart of the creative process. 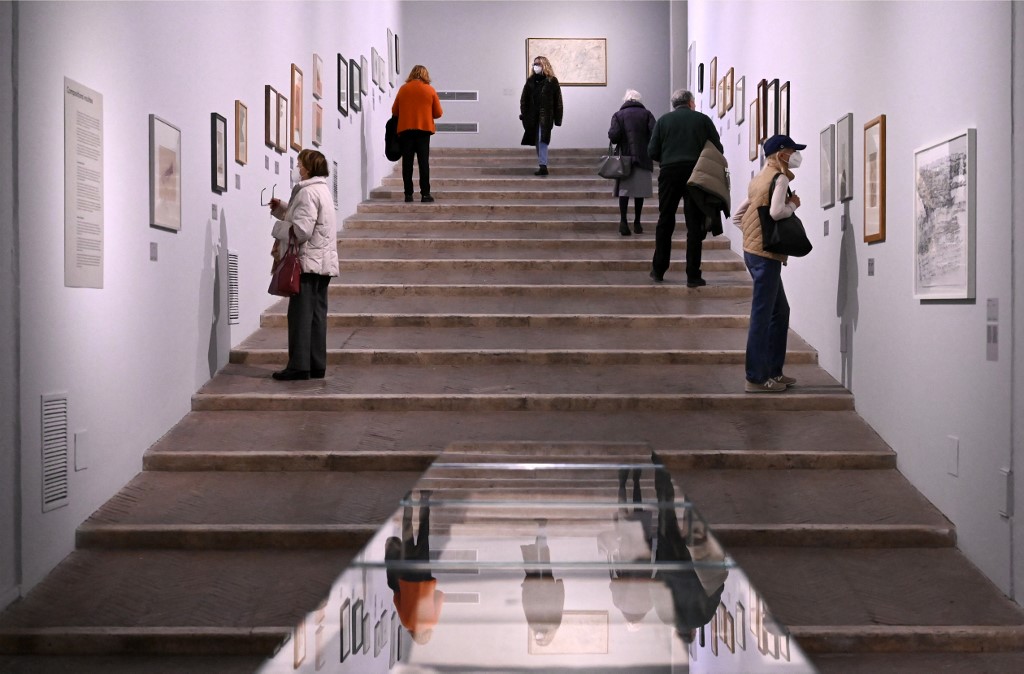 A “Madonna and Child” by the Mannerist Taddeo Zuccari, who lived from 1529 to 1566, “decomposes and unravels into a whole series of scribbled lines as if, in fact, the artist’s hand was completely free”, Alberti said.

These sketches and doodles were important to the artists, Alberti explained, as they allowed them to “release the tension accumulated while drawing”.

“You also need to free yourself from drawing to be able to draw again with the same energy,” she said.

Visitors to the exhibition are themselves invited to unleash their inner creativity in a charcoal grey room, with chalk provided.

Current events have inspired many of the scribblings visitors have left on the walls. The slogans “Putin out!” and “Long live peace” appear next to a depiction of Ukraine’s yellow and blue flag.