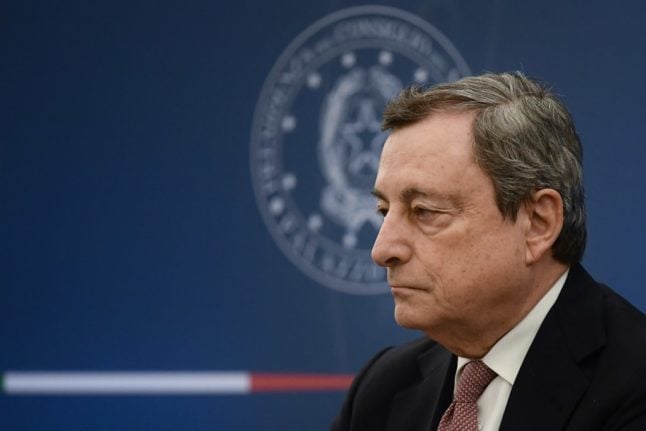 Italy's Prime Minister, Mario Draghi mentioned rationing at a press conference on Thursday. But how concerned should we be? Photo by Filippo MONTEFORTE / AFP

With the state of current world events, it was hardly reassuring this week to see a crop of headlines in Italian media mention rationing. One from news agency Ansa, in English, simply read: “Mull rationing if things keep getting worse”.

Reports quoted Draghi as saying: “if things were to continue to worsen, we would have to start to get into a logic of rationing” in Italy.

The prime minister’s use of the word ‘rationing’ quickly made the headlines of multiple newspapers and fuelled speculation that Italy could be headed towards World War II-style food and fuel restrictions.

We know that the war in Ukraine means supply chain issues are hitting countries around the world. But what exactly did Draghi say about this, and why? And does Italy really face any major shortages?

Here’s a look at the facts.

What did Draghi actually say?

While Draghi did state the possibility of needing to “prepare ourselves” for rationing in future, he stressed that there was no immediate cause for alarm.

The prime minister’s comments were made at the end of a press conference on Thursday evening in response to a question from a journalist about whether Italians will need to alter their lifestyles as a result of supply shortages caused by the war in Ukraine.

The journalist asked: “Is there a need to say to Italians, hold tight and grit your teeth – not so much in preparation for an economic crisis, but more for the potential need to change food and energy consumption habits, for example – is it the time to say this explicitly, that we should prepare for this eventuality?”

Draghi’s initial answer is swift and curt: “It’s not the time, no,” he responds, before elaborating.

“Rising prices are being addressed, the government is taking mitigating measures. This alarm that you’re talking about, I don’t believe it’s yet been raised in France. We need to prepare ourselves for this, but from here to raising the alarm, there’s a long way to go.”

However, despite his reassurances that Italy does not face any immediate shortages, Draghi does conclude by advising the country’s inhabitants to mentally prepare themselves for scarcity, adding, “If things were to get worse, we would certainly have to enter a mindset of rationing”.

Are there any signs that Italy could face shortages?

The main concern in Italy, as Draghi has previously said, is around the soaring cost of energy. However, the Italian government has repeatedly stated that in the short term there is no concern about scarcity of supplies, and has announced plans to end its reliance on imported Russian gas in the longer term.

In his answer to the journalist’s question, Draghi insisted that the government is doing all it can to address the rising price of gas – on which Italy is particularly dependant as an energy source – and reiterated that there is no suggestion that the country will run low on energy supplies or food any time soon.

There are also widespread concerns about supplies of certain foods and produce, though Draghi again said the Italian government was addressing this.

“Issues relating to food supply chains must be addressed exactly in the same way that we are addressing gas supply issues,” Draghi said at the press conference.

“That is, diversifying as rapidly as possible, government assistance with costs, help for families and companies.”

“This applies for everything: for agricultural supplies, for the supply of grain and corn. We know that the temporary absence of Ukrainian and Russian grain from the market will absolutely create a serious gap, so we need to source these from other parts of the world where there is still an abundance.”

How have Italy’s supply chains been affected by the war in Ukraine so far?

On Friday, French President Emmanuel Macron warned that Russia’s attack on Ukraine will “deeply destabilise” food supplies in Europe and Africa as some of the world’s most fertile agricultural land goes unplanted.

Italy’s supermarket bosses have reassured the public that they are not experiencing problems with supply. However, prices of food and other goods in shops are expected to rise. This is mainly due to the rising cost of energy and transport rather than to scarcity of an particular goods, but the price of some types of wheat has soared in Italy.

Soft wheat, which is used for products like pastries, has become more expensive because Italy relies on significant quantities of imports from Russia and Ukraine. The first week of war in Ukraine led to a 13 percent increase in the cost of soft wheat worldwide.

But durum wheat (grano duro), which is used for pasta, has so far seen more price stability because the percentage of Italy’s imports is lower than that of soft wheat.

Meanwhile there are understandable public concerns as the cost of fuel soared past two euros a litre at the beginning of March, and household energy bills are at an all-time high.

Italian government ministers have insisted fuel price rises are not due to scarcity of supply either, but to market speculation on the price of oil per barrel.

Draghi has promised a tax on the excess profits of energy companies to fund further assistance for families and businesses struggling with high energy bills, and the government is also expected to announce on Tuesday a small, temporary reduction in tax on fuel.