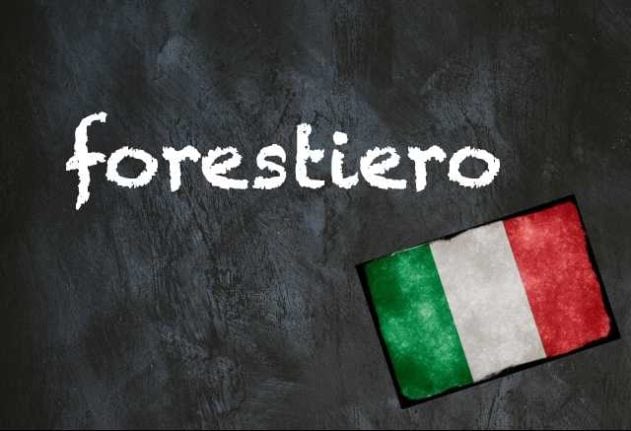 A forestiero (FOR-EST-ee-EH-roh) isn’t, as you might reasonably guess, a lumberjack or a wood-dwelling hermit.

The word comes from the Occitan (a language spoken in the Occitanie region of southern France) word forestier, which itself comes from the Latin foris, meaning outside (the Italian word for outside, fuori (FWOR-ree) also comes from foris).

Forestiero is a slightly poetic or old-timey way to refer to an outsider – for example, it’s often used as the translation for ‘stranger’ in westerns that have been dubbed into Italian:

And is how strangers are often referred to in the Italian translation of the bible:

It’s a regular noun, so its o ending changes to the usual a/i/e depending on whether the subject is masculine or feminine, singular or plural.

Sa come accogliere i forestieri nel migliore dei modi.
She knows how to welcome outsiders in the best possible way.

There’s several Italian words related to forestiero: according to the Treccani dictionary, a foresteria (FOR-EST-eh-REE-ah) is a space in a convent reserved for guests, and can also be used to describe accommodation made available by companies and organisations for guests or staff members visiting from elsewhere.

A forestierismo (FOR-EST-ee-ehr-EEZ-moh) is a word or phrase taken from one language and adopted into another as an ‘outsider word’ (such as laissez-faire or rendezvous in English).

And then (though you’d be very unlikely to actually come across it these days) there’s forestieraccio (FOR-EST-ee-eh-RATCH-oh) – a pejorative variation of forestiero.

The word foriestiero/foresteria by itself isn’t an insult though – and is a poetic alternative to have on hand if you’re sick of identifying yourself as a straniero/a (foreigner).

Are you ready to put pedal to the metal and go full bore when it comes to learning this expression?

Andare a manetta (and-AH-rreh a mann-ETT-ta) in fact means just that: to go at top speed, flat out, at full pelt.

Conveniently for English speakers, it translates pretty directly from the phrase ‘to go full throttle’. Andare is of course the verb ‘to go’ and manetta is the Italian word for a throttle, an old-fashioned sort of lever used in vehicles to regulate the amount of fuel being fed into the engine.

To go full throttle was to channel the maximum amount of petrol possible into the motor so that the car could reach top speed, which is where both phrases come from.

Like in English, it can be used refer literally to, e.g., F1 drivers, but is often used in a metaphorical sense. It’s the kind of colloquial phrase that you’re more likely to hear in spoken conversation than see written down in a book, and is most widely used among young Italians.

Se vuoi arrivare entro un’ora dovrai andare a manetta.
If you want to get there in an hour you’ll have to go full tilt.

You don’t need to restrict yourself to the verb andare: there are various actions that could be done a manetta, such as parlare a manetta (talk at top speed), alzare il volume a manetta (turn the sound up to top volume – e.g. on the TV or radio), or piovere a manetta (tip it down with rain).

È la mia canzone preferita, alza la radio a manetta!
This is my favourite song, turn the radio up as loud as it’ll go!

You might wonder if there’s a connection to manette (handcuffs) but the two aren’t to be confused: the etymological link comes simply from the word hand (mano), a manetta being a hand-controlled thrust lever and manette being, well, handcuffs.

To help you differentiate, aside from context, you’ll almost always only see manette in the plural form, whereas a manetta is only used in the singular form.

Toglietemi immediatamente queste manette!
Take these handcuffs off me at once!

Parlavi a manetta ieri sera.
You were talking at a 100 miles an hour yesterday evening.