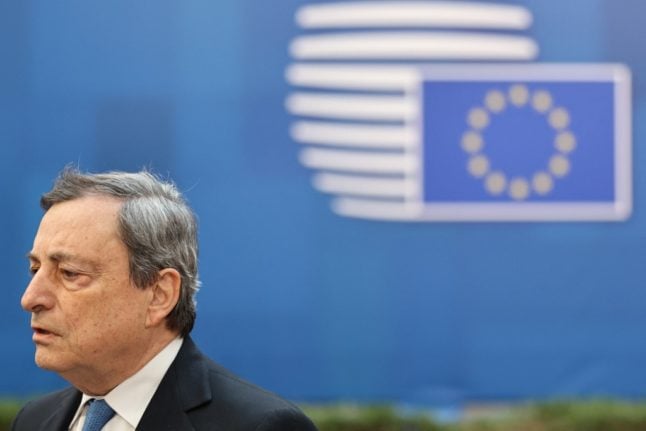 Prime Minister Mario Draghi said Italy will “go with the EU” on proposals for further sanctions against Russia. Photo by Aris Oikonomou / AFP.

Italy will “follow the decisions of the European Union” on new sanctions against Russia, Prime Minister Mario Draghi said at a press conference on Wednesday.

“Today the gas embargo is not yet… on the table,” Draghi told reporters after a cabinet meeting.

“It is not a possibility being discussed at the moment, but the situation is constantly evolving.”

“If we are offered a gas embargo, we will follow the EU down this path, we want the most effective instrument to achieve peace,” he said.

The growing number of “massacres” in Ukraine “is prompting us to adopt even tougher sanctions,” he said. “All the allied countries are wondering what can be done to stop Russia… We are following what the European Union decides.”

Draghi said “I believe the question is between peace and having working radiators, or air conditioning in summer. I think this is the question we must ask ourselves.”

He pledged that “if gas supplies were to stop today, we would be covered until the end of October with our reserves, there would be no consequences”.

Draghi, a former ECB chief, also called for a ceiling on gas prices.

“I have been asking for some time to put a ceiling on the price of gas, that would be the most rational thing at the collective, European level.”

“The EU has extraordinary power in the market, it is in fact the only buyer,” he said.

This power “can be exercised through the establishment of a price that is remunerative but not extravagant like the one we have now.”

He said the EU would make a proposal on a price cap “in a few days, but we can also proceed with national measures.”