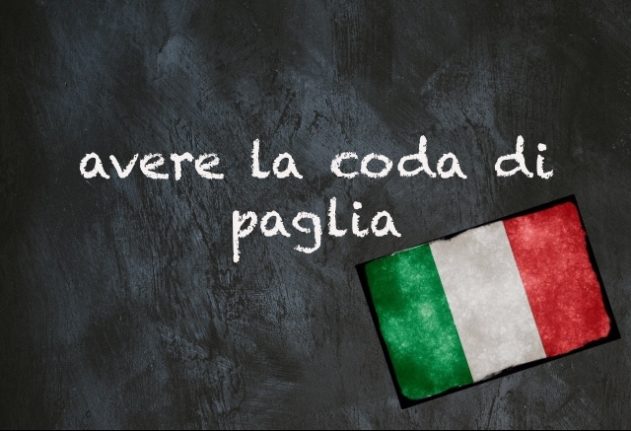 Are you quick to react? To get defensive in a conversation before any criticism has come your way?

If you’re having a tough day, it’s easy to snap back. It likely won’t help, then, that the person you’re speaking to may accuse you of having la coda di paglia (Av-ER-eh Lah CO-DAH dee PAL-YAH) if you do.

Which is sure to wind you up even further.

It literally means ‘having a tail of straw’, which as you can guess, is quick to ignite and set on fire.

But I’ve never talked behind your back. So I don’t understand why you’re saying this to me

No, well, I was making a general remark. It’s not that I was talking about you. Why so touchy?

You have a straw tail, then, if you feel obliged to justify yourself, even if nobody is accusing you of anything.

One said source of the expression comes from an Aesop fable about a fox whose tail was cut off by a trap.

The fox was ashamed of its newfound lack of elegance and so its animal friends decided to make it a convincingly real-looking straw tail.

But one day a cockerel let the secret slip and news of the fox with the straw tail reached the farmers.

Hence ‘having a straw tail’ means fearing any kind of criticism for a behaviour, or a defect.

Depending on the context, the expression is also used with the meaning of not having a clear conscience and always being suspicious of everything.

You know you’re at fault, so you’re shady and quick to defend.

Damn! This morning my wallet got stolen!

I didn’t do it, I was at home this morning!

Why would the initial reaction be to defend if you’re innocent?

Does someone have a guilty conscience there? Or – overcompensating a bit, are we?

Sure, don’t worry, I didn’t say that. But inside me I think you have a straw tail (a guilty conscience), because I didn’t accuse you.

The phrase suggests an over-the-top or guilty reaction to something that was never a criticism or accusation.

Who broke the glass?

I wasn’t there, and if I was, I didn’t see anything!

Even if the person with a ‘straw tail’ didn’t actually do anything wrong, they could be regarded as oversensitive or prickly if they react in this way.

So the next time someone is pushing your buttons, keep your cool and don’t set fire to that straw tail.