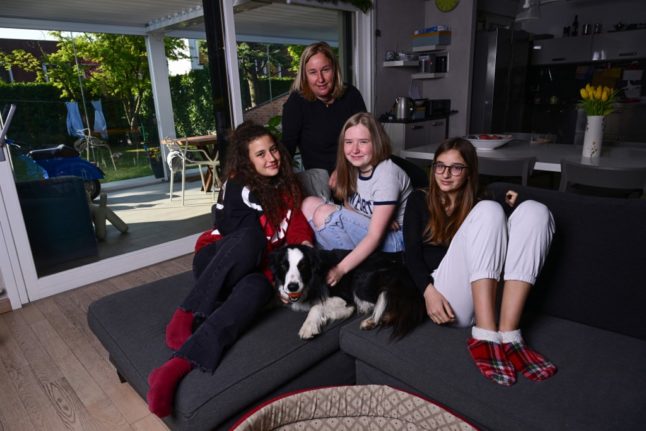 “You could hear the shots and the sounds of missiles… many buildings in the city centre were destroyed, like our cinema,” the 16-year-old told AFP, recalling the torment in her city after Russia’s invasion.

But unlike so many others still trapped in Kharkiv, her nightmare ended on March 7 when, after a long journey by train and bus, she arrived in Cusago, near Milan, into the care of the family she has stayed with twice a year since she was nine.

Here, her room is filled with cuddly toys and happy memories of Italy that helped sustain her during the worst days.

“If I have to die, I die. But I will have had a happy life, I was lucky, I managed to visit Disneyland in Paris, Berlin and Sicily,” she had told her
foster parents while in Kharkiv. 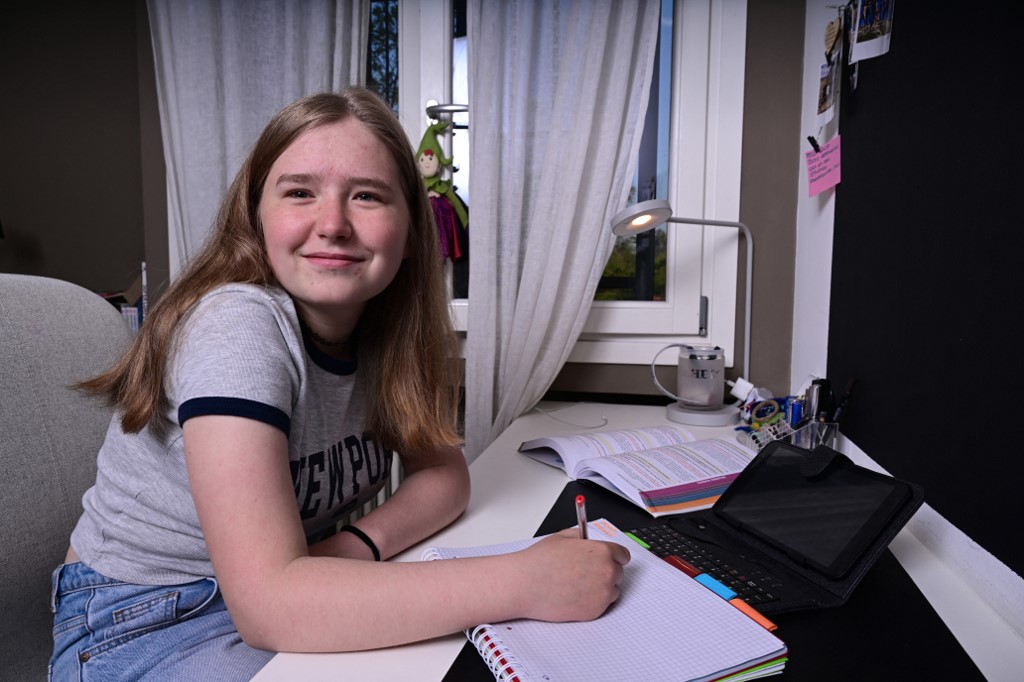 The Italian association “The Children of the East” (I bambini dell’ Est) grew out of European-wide efforts to give children from Ukraine fresh air and new possibilities after the 1986 nuclear disaster at Chernobyl. So far, the association has brought 280 refugees to Italy. (Photo by MIGUEL MEDINA / AFP)

Viktoria came to Italy with the help of “The Children of the East”, an Italian association which grew out of Europe-wide efforts to give children from Ukraine fresh air and new possibilities after the 1986 nuclear disaster at Chernobyl.

She regularly spent three months in the summer and one month in the winter in the quiet, green surroundings of Cusago.

It was a welcome break from Kharkiv, where she lived in one of Ukraine’s notorious children’s homes, which host orphans but also those separated from parents deemed unfit for various reasons, from criminality to alcoholism.

Since Russia invaded its neighbour on February 24, Ukraine’s second-largest city has faced a daily barrage of Russian rocket attacks, day and night.

When the air raid sirens went off, Viktoria — known as Vika — took refuge in a school basement. Wrapped in a sleeping bag, she passed the time by playing Burraco, an Italian card game. 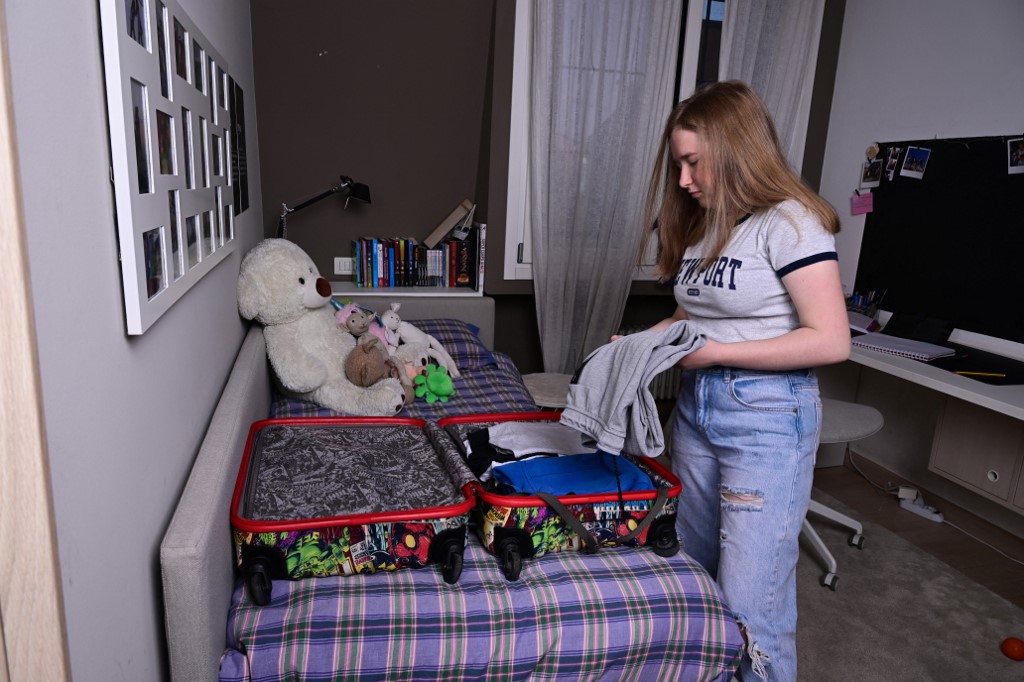 The Italian aid programme had for years provided Viktoria Shakshyna with a respite from the children’s home where she lived in Kharkiv, eastern Ukraine. When the bombs began falling, it became her lifeline. (Photo by MIGUEL MEDINA / AFP)

With her host mother, 47-year-old graphic designer Michela Slomp, nearby she says her future is Italy.

“My house is here, I want to finish school and go to university,” she said in almost perfect Italian, her face lit up with a large smile.

But the desire to help the children of Ukraine lives on through the “Children of the East” association, run by Federica Bezziccheri.

Since the war began, her telephone has rung day and night with Italian families searching desperately for their foster children — and young
Ukrainians trying to get out.

“We are experiencing the war live. When we call the children via videolink, we can hear the bombing,” Bezziccheri said.

“The girls tell us how they only had to walk a hundred metres to see the dead. The boys signed up as volunteers, filling sandbags or digging trenches,” she told AFP at her apartment in Milan.

“Some young people say it is better to risk being injured or killed helping their country, than to die like rats in a cage under a building.”

So far, the association has brought 280 refugees to Italy, out of more than 100,000 Ukrainians who have sought refuge in the Mediterranean country.

The Italian foster family of Yana Alieva, 20, got her out of Kharkiv in January, anticipating Russia’s invasion. 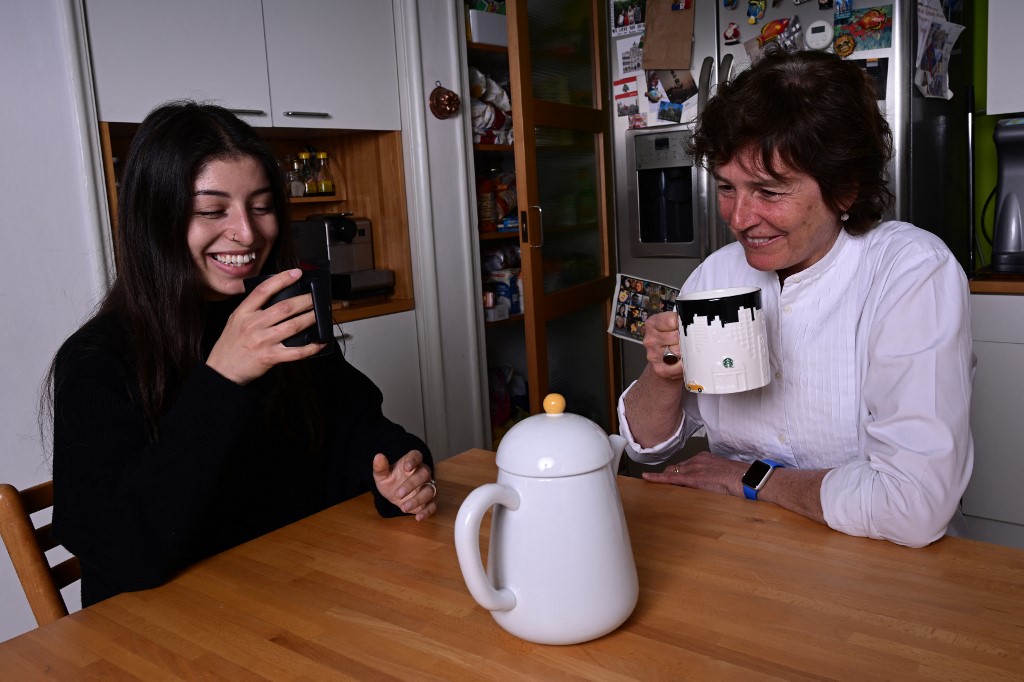 20-years-old Ukrainian refugee Yana Alieva (L), from Kharkiv, is pictured in Milan on April 26, 2022 drinks tea with her Italian adoptive mother Carla Marini in the home of the family which hosts her. (Photo by MIGUEL MEDINA / AFP)

She too was brought up in a children’s home but is now safe in a Milan apartment, a blue and yellow Ukrainian flag draped from the balcony.

“I am heartbroken. In a few days my world has disappeared. My boyfriend and my friends survived the bombs in the cellars before moving to safer areas, I fear for those who stayed,” she said.

She is also angry. Before the war, “we were all united, Russians and Ukrainians, as one people”, but now “we see who they really are”. 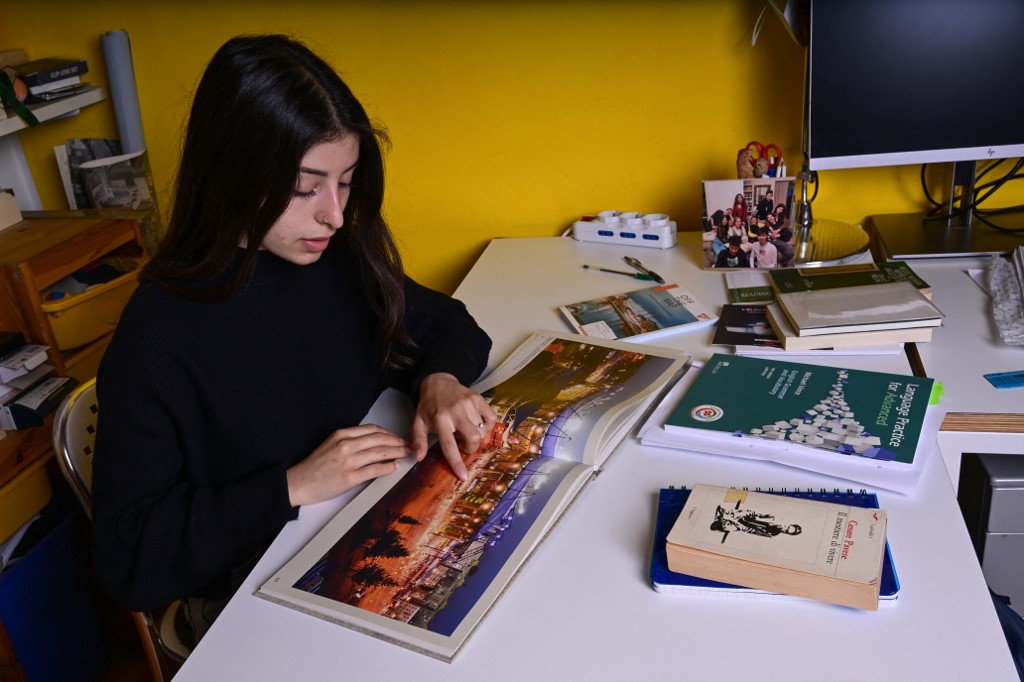 20-years-old Ukrainian refugee Yana Alieva, from Kharkiv, looks at pictures of her city in Milan on April 26, 2022 in the home of the family which hosts her. (Photo by MIGUEL MEDINA / AFP)

She has enrolled in the Catholic university in Milan, but hopes to return to Ukraine after the war.

“My home is there,” she said, adding she hoped “to participate in the reconstruction of my city and make it even more beautiful”.