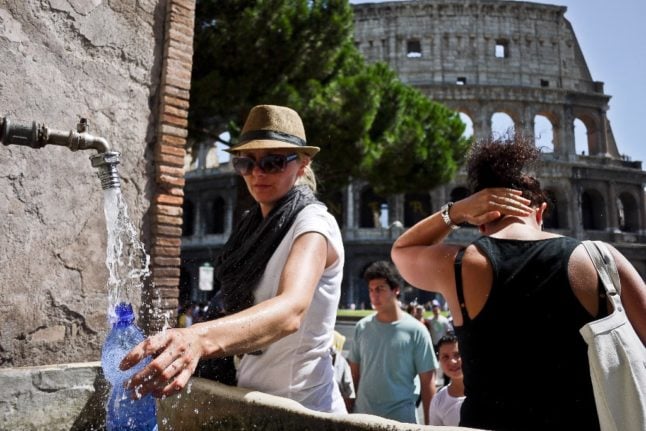 Rome could see record June temperatures in the coming days as a heatwave descends. Photo by Andreas SOLARO / AFP

Most parts of Italy can expect temperatures of up to 37-39°C in the shade by Friday as another African anticyclone sweeps the country, according to weather forecasts on Wednesday.

The heat is set to be a particularly intense 40-41°C in Sicily, Sardinia, and Puglia, as well as some inland central areas including the province of Perugia.

The anticyclone, named ‘Scipio’, is already bringing a wave of sticky heat to much of the south and centre of Italy on Wednesday, said Lorenzo Tedici, meteorologist at IlMeteo.it.

Northern regions will be feeling the heat by Republic Day, he said, with “temperatures over 7-10°C above the seasonal average, averages which have now been distorted for almost a month.”

Rome is likely to see record June temperatures by this weekend, he said.

The humid heat, known in Italian as ‘afa’, is expected to last throughout the weekend before things cool down again by Monday, according to IlMeteo.

Meteorologists stress that the first heatwaves of the year are especially risky – especially when they arrive early, as people are not yet acclimatized.

The Department for Civil Protection placed the inland cities of Perugia and Campobasso on ‘amber’ alert – the second-highest warning level – for extreme heat on June 2nd, with other cities including Rome, Naples and Palermo on a lower-level ‘yellow’ alert.

Millions of Italian residents are expected to travel within the country on June 2nd, Italy’s Republic Day or the Festa della Repubblica, with many taking Friday off work to create a ponte, or ‘bridge’ over the weekend.

Italy saw its first wave of unusually hot weather this year in mid-May, with an anticyclone sweeping in from northern Africa bringing temperatures up to around 30C – well above seasonal average – in many parts of the peninsula.

While many welcomed the prospect of rain in southern areas after months of extremely hot and dry conditions, the weather has turned from one extreme to the other.

Torrential rain has already caused mudslides and severe damage in Campania, near Avellino south of Naples, while two people drowned in a flooded canal in the northern city of Padua, according to Italian news agency Ansa.

Further storms are forecast across the country this week before another heatwave begins.

There have so far been 1,140 ‘extreme weather events’ in Italy this summer, farmers’ association Coldiretti said on Wednesday.

Along with much of the rest of mainland Europe, Italy has been battered by a series of heatwaves this summer that have fuelled forest fires and drained rivers.

The Po Valley in the north of the Italy, one of country’s most important agricultural areas, is currently experiencing its worst drought in 70 years,

While it’s not yet known if 2022 will be the hottest summer on record, it is on course to be the driest, meteorologists said.