A protestor holds a sign reading “My body, I decide” at a demonstration in central Rome in support of abortion rights. Photo by TIZIANA FABI / AFP

For 40 years, gynaecologist Michele Mariano has been the only person performing abortions in Italy’s rural southern Molise region.

He has delayed retiring twice because no one will replace him, many refusing to terminate pregnancies as conscientious objectors.

READ ALSO: Why an Italian woman was forced to go to 23 hospitals to have an abortion

It’s an extreme example that’s emblematic of a wider issue in Italy, where abortion up to 90 days after conception has been legal since 1978 – but is still almost impossible to access in some parts of the country.

A majority of gynaecologists refuse on conscientious objection grounds, driven either by religion or societal pressure, while recent moves by right-wing politicians with links to the Church have only increased obstacles for women.

As a result, dozens of hospitals and clinics across the country provide no abortion services at all.

Finding doctors to perform them can be a minefield, since there are no official lists disclosing those who do, while services vary wildly across the country.

“Someone goes to the hospital not knowing whether the doctor in front of them will do it,” said Eleonora Mizzoni, 32, an abortion activist in Pisa.

Some 67 percent of gynaecologists across Italy – in cities and rural areas alike – are conscientious objectors, according to the latest health ministry figures from 2019.

That figure exceeds 80 percent in five of Italy’s 20 regions.

The only resources available to signpost women towards the services they need come in the form of unofficial websites, such as the map compiled by Laiga, an association of Italian gynaecologists.

Martina Patone, 35, described how she called about 10 hospitals in Rome and other cities to get an abortion eight years ago before a charity helped her out.

She had sought a medical abortion, which involves taking pills, but in the end had to undergo surgery.

Patone recalled having to explain to a nurse how the abortion pills worked, and before getting help from the charity having to lining up at 6am on a “rusty staircase” in a Rome hospital basement to be put on a long waiting list.

“I really thought that going to the hospital would be easy. Not at all,” she told AFP.

Besides the red tape, the process makes women feel as if “you did something wrong, you shouldn’t say anything”, she said.

She called it “absurd” that women continue to have the same problems exercising their right to abortion.

Data published in May by the Luca Coscioni Association, which advocates for abortion rights, found that in at least 31 hospitals, all doctors or health workers who would assist in an abortion were objectors.

To help avoid such roadblocks, Mizzoni’s group “Obiezione Respinta” (Objection Overruled) created an interactive online map where women can warn others where they will be turned away.

One woman on the site described waiting hours outside an operating room in Caserta, north of Naples, only for the hospital’s gynaecologist to dismiss her saying, “I’m an objector, see you later”.

Another in the Tuscan city of Pistoia recalled how the gynaecologist wrote her a prescription for a fertility drug, instead of the requested morning-after pill.

A woman in the Umbrian town of Foligno said she was refused follow-up care after an abortion – administered by the hospital’s sole non-objector – despite suffering from pain and fever.

The law stipulates that objectors cannot refuse medical care before and after abortion, but that is not always respected.

A 32-year-old Sicilian, Valentina Milluzzo, died of sepsis in 2016 in the fifth month of pregnancy when doctors refused to intervene when one twin died inside her womb but another was still alive. 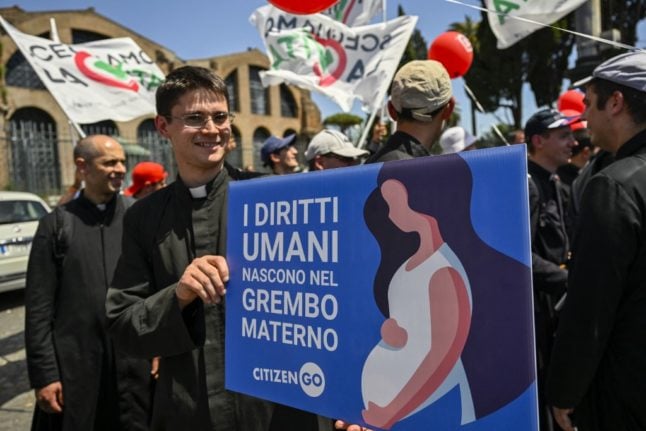 Priests join an anti-abortion demonstration on May 21st 2022 in central Rome. The placard reads “Human Rights are born in the womb”. Photo by Alberto PIZZOLI / AFP

Italy is an outlier in western Europe, where the trend in recent decades has been to remove barriers to abortion, said Leah Hoctor, the Center for Reproductive Health’s European director.

“Patients are going through a quagmire, an obstacle course, barrier after barrier because of these widespread refusals of care and the complete abdication of the state… this is unacceptable,” she told AFP.

She said the failure of the state to manage its objectors efficiently amounts to “abdication of its responsibility under international human rights law”.

The Council of Europe has twice censured Italy over inadequate access to abortion, with little consequence.

Conscientious objectors say faith drives their refusal to perform abortions. The Catholic Church is uncompromising on the issue, with Pope Francis calling it “murder”.

The Italian Association of Catholic Obstetricians and Gynaecologists says its mission is “to counter the culture of death” and promote respect for life following “Christian principles”.

But abortion activists say objection has ballooned beyond a moral issue and is now often based on expediency. In short, it’s more professionally beneficial to be an objector than not in Italy.

The public pressure arises in a society increasingly concerned with its declining birth rate.

Abortion is not part of normal medical training, sex education in schools is not compulsory, and some pharmacists illegally refuse to dispense morning-after pills.

‘Wind from the USA’

Piedmont, governed by a far-right coalition, announced in April it would offer 4,000 euros ($4,300) each to 100 pregnant women considering abortion for financial reasons, to convince them to reconsider.

Meanwhile, authorities in left-leaning Tuscany named an objector gynecologist last month to head a family planning centre in Pontedera by the Arno river, which had been the first to introduce the abortion pill in 2005.

“Obviously times change and the anti-abortionist wind arriving from the USA is also sweeping over the Arno,” consumer rights association ADUC noted.

However, unlike in the United States, abortion is not at the top of the political agenda in Italy and even for right-leaning parties there is no real push to overturn the law.

Meanwhile, advocates of abortion rights worry that calling for improvements to the law – by making doctors easier to find or even limiting conscientious objections – might backfire, gynaecologist Mirella Parachini told AFP.

“No one feels like questioning the abortion law for fear that reopening it would only lead to its deterioration.”