On Thursday Boris Johnson announced that he would step down after dozens of his ministers quit their jobs in protest at his leadership. News of his departure naturally dominated the front pages in the UK, but made quite a few headlines in Europe too.

Here’s a selection of the reaction in the countries covered by The Local.

Fluent French-speaker Johnson has long had a penchant for French-bashing – memorably referring to the French as ‘turds’ during the Brexit negotiations – and had a tricky relationship with arch Europhile Emmanuel Macron.

The leftwing French daily Libération splashed on Johnson’s departure under the headline Big Beigne, a slightly torturous Big Ben pun, as in French a beigne means a hit or a blow. The paper described Johnson’s term as “marked by scandals and lies, further weakening a country already divided by Brexit”.

The same newspaper simply wished the UK ‘good luck’ at the beginning of Johnson’s premiership. 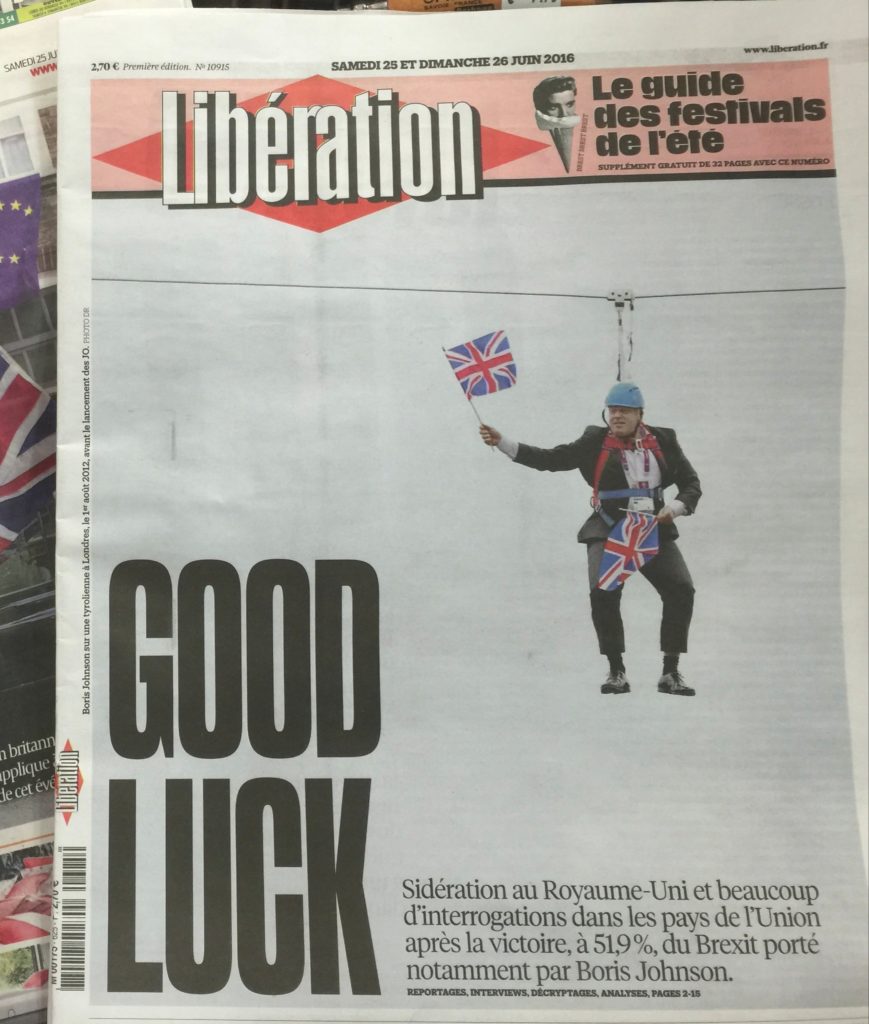 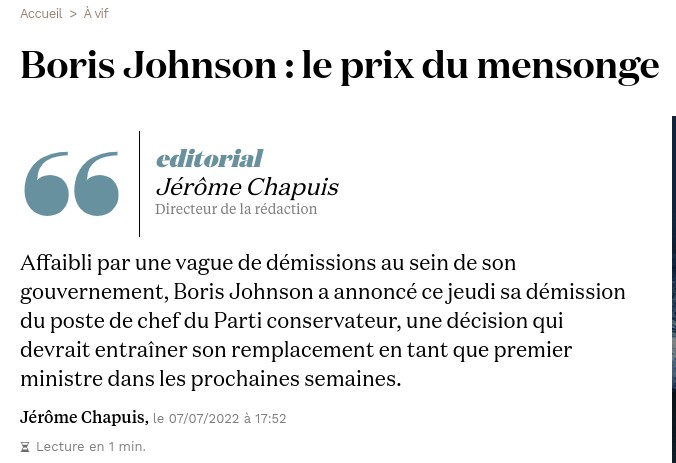 Meanwhile French journalist and best-selling author Dov Alfon was extremely tickled at the actions of the Madame Taussaud museum in Blackpool, which posed its Boris Johnson waxwork outside the local Job Centre.

German tabloid Bild chronicled Johnson’s missteps, saying “one lie too many” had brought down the Prime Minister. 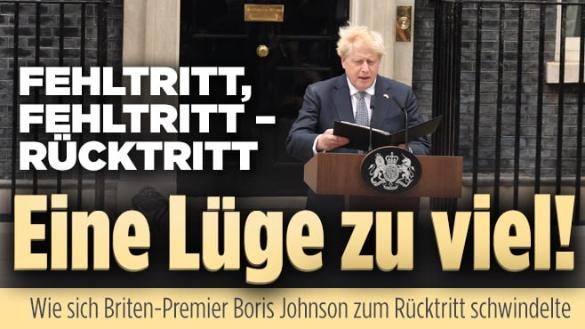 Spiegel led with the same header, adding “The clown’s leaving, the chaos remains.” In their tweet they said their cover story was on “Johnson’s toxic legacy”.

Germany’s FAZ commented on Johnson’s “bitter” departure. The newspaper wrote: “When Boris Johnson stepped outside… to announce his resignation, some expected a word of personal reflection, perhaps an admission that could explain why he was politically finished only two and a half years after a brilliant electoral success.

“But it was the others who got their talking to. ‘When the herd moves, it moves,’ he said bitterly, as if everyone but him was wrong – his party colleagues, the journalists, even his cabinet colleagues.”

Some German publications had a few harsh words to say about Brexit.

“Many Britons will now breathe a sigh of relief,” said Handelsblatt. “Gone are the days when one had to doubt whether one’s own prime minister was telling the truth to the people or, once again, was deceiving them. This is what Johnson did with Brexit, which he first pushed through with false figures and then sold as a big win for his country. In fact, the UK is worse off economically today than it would be in the EU.”

Boris Johnson’s resignation has made the front pages of all of Spain’s main newspapers, with little sympathy across the political spectrum for a leader and a country that Spaniards have looked at with bemusement since the Brexit vote.

Left-leaning news website El Diario, a partner of The Guardian, went with “Rise and fall of Boris Johnson: The Prime Minister who tripped over his own lies”.

In an op-ed piece in Spanish conservative daily ABC, journalist Jesús Lillo chose the headline “The man who manipulated himself”, describing Johnson as both the problem and the solution for a disorientated United Kingdom, a “winning combination in the rabble-rousing lottery”.

Spain’s leading national newspaper El País described the soon-to-be former British PM as “the Brexit magician”, stressing just how many lies he’s pulled out of his hat to reach power.

Whilst Spain’s second most read newspaper El Mundo went with “Goodbye to the king of buffoons” in its daily podcast. 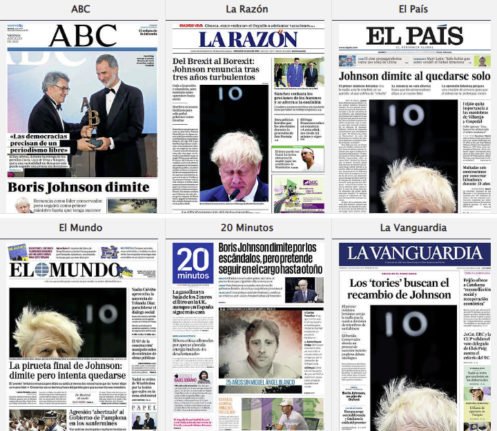 Spain’s top newspapers have given a lot of front page coverage to Johnson’s disheveled hair, as well as running with words such as “the last pirouette” and “from Brexit to Borexit”.

Switzerland’s German-language Neue Zürcher Zeitung said Johnson was “a political pop star and an election winner” but “had fallen victim to his own staging”. “Boris Johnson has always been all about him rather than policy content… in the looming economic crisis, citizens want a reliable head of government who will take care of their problems.”

On Friday morning, the NZZ sized up Johnson’s potential replacements, saying it would be a battle between “a Brexit convert, an ambitious manager or a quiet shepherd”.

Swiss tabloid Blick took a different approach, saying that despite Brexit and the constant controversy surrounding Johnson “Europe will still miss the anti-European”, largely for his role as an advocate of Ukraine.

Blick did however have some harsh words for the soon-to-be-former PM.

“He was never a role model, seldom a gentleman, all too often just a liar. With his Brexit he drove a wedge between the kingdom and the continent – and he frightened the neighbours so much that Scotland will soon vote on its independence for the second time.”

“The era of narcissistic politicians is over”. This is what the Austrian newspaper Die Presse wrote in its editorial after news that Boris Johnson would resign as UK’s prime minister.

The daily continues: “for the British conservatives, the departure of Prime Minister Boris Johnson is an opportunity to return to basic virtues such as honesty and seriousness”.

Newspapers in Austria highlighted the many controversies of Johnson’s time as leader of the United Kingdom, and broadcaster ORF reported that there were “calls for his quick replacement”.

The national broadcaster also mentioned Johnson’s farewell speech: “he did not apologise for the many scandals that eventually forced him to withdraw”.

Kurier ran a story based on British media reports that Johnson had “desperately” wanted to remain in the position because of his upcoming wedding party planned in Chequers, the official country estate of the British Prime Minister.

Downing Street on Friday announced that the private wedding party would take place at another location.

The daily newspaper published a cartoon mocking Johnson’s farewell speech and apparent blindness to his own standing in UK politics:

While Corriere took a longer view with ‘Rise and fall of Boris Johnson: the boy who wanted to become “king of the world” and took London out of Europe’.

Although Denmark’s mainstream politics has a settled pro-EU stance, the country has not seen its relations with the UK strained by Brexit to the extent seen in bigger EU powers like France and Germany.

The Conservative Party has now had five leaders in 20 years, Politiken observes, adding that the country is “waiting with anticipation to see who comes next”.

The right-leaning Jyllands-Posten wrote that Johnson will be remembered for a “historic divorce” and little else, in reference to Brexit, though foreign security correspondent Jørn Mikkelsen praised the outgoing PM’s support for Ukraine, suggesting it may have been his “finest hour” (using the English phrase first popularised by Churchill).

In its analysis, broadcaster DR wrote that “Boris Johnson will be among the prime ministers to have held the position for the shortest time in British history, but the British will feel the effects of his Brexit for generations.”

In Sweden, newspaper Svenska Dagbladet led with “Harassment scandal was the end for Johnson” in reference to the controversy surrounding Johnson’s nomination of disgraced MP Chris Pincher as deputy chief whip and subsequent denial that he knew of allegations of sexual harassment against Pincher .

“Anyone who expects self-reflection from Boris Johnson is going to be waiting in vain,” wrote columnist and author with Dagens Nyheter, Gunnar Pettersson.

“Boris Johnson’s tragicomedy is finally over”, the headline of the column states.

Journalist Arvid Åhlund meanwhile argued that “Boris Johnson’s resignation is, more than anything else, a sign that British democracy is working as it should”.

Meanwhile, another regional, Stavanger Aftenblad, wrote that the PM would be remembered for “Brexit, lies and partying”.

Other outlets focused their analysis in the aftermath of the resignation on the various scandals surrounding the PM throughout his time at Downing Street. Public broadcaster NRK opted for: “The scandals that plagued Boris Johnson”.

Norway’s most-read online newspaper Verderns Gang summed up his time as prime minister as an “avalanche of scandals”, adding, “Johnson has been a controversial figure during his entire public life. From juicy public statements to political manoeuvres: He has rarely been able to restrain himself from creating attention around his own persona.”