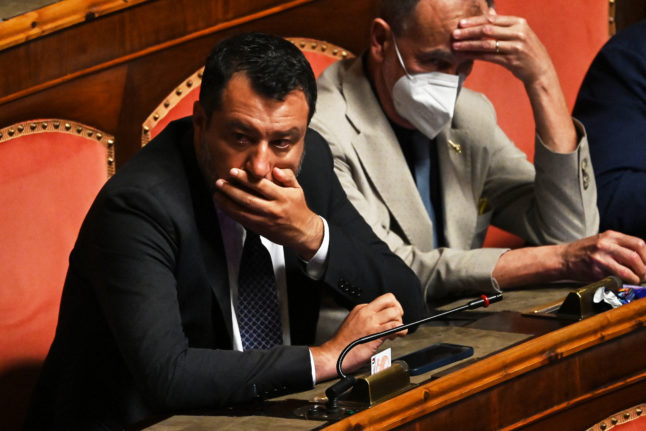 Far-right Lega party leader and Italian Senator Matteo Salvini reacts in the Senate hall before a vote of confidence to the prime minister at Palazzo Madama in Rome, on July 14, 2022. Photo by Andreas SOLARO / AFP

The Five Star Movement (M5S), headed by former premier Giuseppe Conte, is a formerly anti-establishment party that has plummeted in the polls and lost parliamentarians since joining the government, hurt by policy U-turns and internal divisions.

The decision to sit out the vote – which political experts say is a tactical attempt to win back grassroots support – could push Draghi’s already fractured coalition to collapse, and even force early national elections later in the year.

“We are not taking part in the vote on this measure today… but this position of ours is not about confidence in the government,” said, Mariolina Castellone, the leader of M5S in the Senate.

The government survived the confidence vote, but Draghi had previously warned on multiple occasions he would not carry on as premier without M5S support.

Draghi, who has stated on multiple occasions there will be no government without M5S, called a cabinet meeting directly after the vote.

The prime minister had previously shown signs of losing patience with squabbling between parties, saying on Tuesday he would step down as prime minister if M5S quits the coalition.

“For me there is no government without Five Star,” Draghi said at a press conference on Tuesday. “There is no Draghi government different from the current one.”

The vote was called on an aid package worth about 23 billion euros, designed to help Italians deal with soaring energy bills and rising inflation.

But it also included a provision to allow a garbage incinerator to be built in Rome – something M5S has long opposed.

Analysts suggested the beleaguered party was not trying to collapse the government but attempting to win back some of its lost support by doubling down on its principles ahead of the scheduled 2023 general election.

Lorenzo Codogno, a professor at the London School of Economics, said the abstention would usher in “a new political phase”.

“Draghi would have no choice but to resign,” he told AFP.

Since winning legislative elections in 2018 with an unprecedented third of the vote, M5S has been losing support and risks being wiped out in national elections scheduled for next year.

Last month the party – which had represented the largest in parliament – split, with Foreign Minister Luigi Di Maio starting a breakaway group, ‘Together for the Future’, and taking a quarter of M5S parliamentarians with him.

Conte, whose party is now polling at 11 percent of the vote, is trying to bring more visibility to M5S ahead of elections.

Codogno said he did not believe that Conte was seeking to bring down the government, but that his party “wants to make headlines and make gains in the polls again by running opposition as if it were not in government”.

The far-right has seized on the tensions, with the leader of the League party within the governing coalition, Matteo Salvini, saying on Wednesday that if M5S were to sit out the vote, new elections should be called.

“I think there is nothing left for Draghi but to go to Mattarella and resign,” Franco Pavoncello, a professor of political science at Rome’s John Cabot University, told AFP.