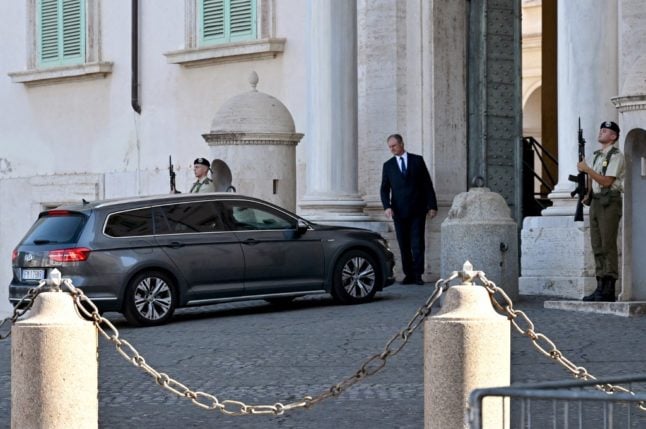 Mario Draghi arrives at the Quirinale palace in Rome to hand his resignation to President Sergio Mattarella on July 21, 2022. Photo by Andreas SOLARO / AFP

Draghi submitted “his resignation and that of the government he heads,” the office of President Sergio Mattarella said in a brief statement.

The president “took note of this” and the government remained in place to “conduct current business,” the statement added.

Draghi, a former European Central Bank chief, announced the end of his government in a speech to parliament on Thursday morning after parties withdrew their support for the coalition. The president will likely now dissolve parliament and call early elections for September or October, according to political analysts.

Draghi appeared calm and upbeat in his address on Thursday, after tense moments on Wednesday in which the usually softly-spoken 74-year old reprimanded his squabbling coalition, saying was not the time for uncertainty amid a myriad of challenges, from a struggling economy and soaring inflation to the Ukraine war.

“Sometimes even the hearts of central bankers get used,” he joked, thanking parliamentarians “for all the work done in this period”.

Draghi essentially confirmed his resignation after he first presented it to the president last Thursday, upon losing the support of the Five Star Movement (M5S), a major party within the coalition.

The president urged Draghi to go back to parliament to attempt to find a way forward – but he lost the support of two more parties as he faced another confidence vote.

Silvio Berlusconi’s Forza Italia, Matteo Salvini’s anti-immigrant League, along with M5S, this time opted to sit out the vote, saying it was impossible to recover the trust lost last week. 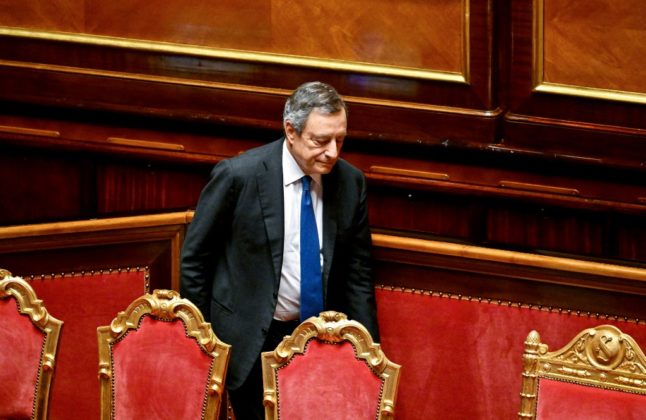 Italy’s Prime Minister Mario Draghi after addressing the Senate on July 20th in a last attempt to resolve the government crisis. Photo by Andreas SOLARO / AFP

Draghi’s downfall comes despite polls in the lead up to Wednesday’s drama suggesting most Italians wanted him to stay at the helm until the scheduled general election in May next year.

He said Draghi and Italy were “victims of Five Star madness”. Five Star head Giuseppe Conte retorted that the Movement, which began life as a protest party, had been “the target of a political attack. We were forced to the door”.

Enrico Letta, head of the centre-left Democratic Party, which voted in support of the prime minister, said toppling the Draghi government meant “going against Italy and Italians’ interests”.

Anxious investors were watching closely as the coalition imploded. Concerns rose that a government collapse would worsen social ills in a period of rampant inflation, delay the budget, threaten EU post-pandemic recovery funds and send jittery markets into a tailspin.

Based on current polls, a rightist alliance led by Giorgia Meloni’s post-fascist Brothers of Italy party and including Forza Italia and the League would comfortably win a snap election — if the three parties can get along.

Such a coalition “would offer a much more disruptive scenario for Italy and the EU” than Draghi’s national unity government, wrote Luigi Scazzieri, senior research fellow at the Centre for European Reform.