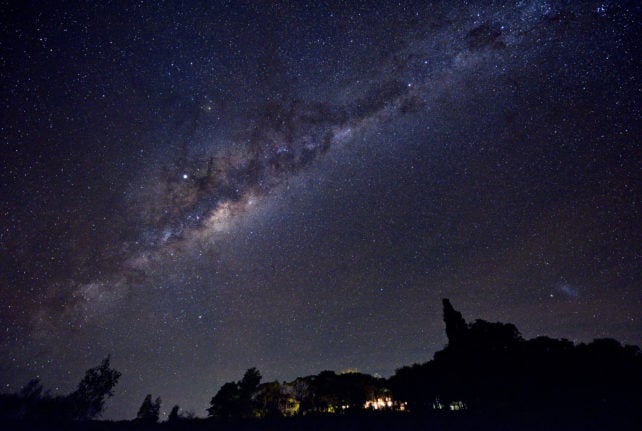 One of the most romantic nights of the year in Italy is San Lorenzo, when shooting stars can be seen across the country.

This is because of the passing of Perseid, a meteor shower that cross the sky at this time of year and is known in Italian as lacrime di san lorenzo, or ‘San Lorenzo’s tears’. August 10th is the name-day (onomastico) of San Lorenzo.

There’s a good chance of seeing falling stars any day this week, with August 12-13th tipped as the best nights to see a meteor shower. But the 10th is when you can really join Italians in celebrating the festival, with many towns and cities putting on events.

Here are your best bets for joining in the fun and doing a little star gazing if you’re in a major Italian city this year.

Gianicolo (‘Janiculum’) Hill, which overlooks the city of Rome, is one popular viewpoint to head for; and for those who want to lay down their blanket without having to make too much of a schlep there’s Circo Massimo, an ancient Roman chariot racetrack in the middle of the city.

It’s worth noting that due to their central locations, however, neither spot will have perfect visibility.

If you want somewhere a little further out (with less light pollution) there’s Parco degli Acquedotti, a park set amongst ancient Roman aquaducts in the south-east of the city; and Parco della Caffarella.

Both parks are ungated (something of a rarity for Rome), meaning they’re open 24 hours a day.

From 8.45pm (sunset is at 8.17pm), Villa Vogel, which is hosting the event ‘Sotto le stelle‘ (‘Under the Stars’) will put on a star-watching session led by the Florentine Astrological Society.

If you’re not in the mood for an organised activity, the Pian dei Giullari, not far from Piazzale Michelangelo near the centre of Florence, is recommended or those who can’t get too far out of the city.

For those who have access to a car and can head a little further afield, the stone quarries of Maiano in the Fiesole area; or further out, the hill of Monte Morello, are both good star-gazing destinations.

One option for stargazing without having to leave the city is the Giardini Indro Montanelli planetarium in Porta Venezia, which organises a special evening event at 9pm for San Lorenzo on August 10th featuring guided observation of the night skies.

If you’d rather find a peaceful spot outdoors to watch for shooting stars, one option in the city is Parco di Trenno (also known as Parco Aldo Aniasi). This 50-hectare stretch of meadow and woodland sits between Milan’s San Siro stadium and the perhaps better-known park at Boscoincittà. Boscoincittà however closes at 8pm, while Parco di Trenno is ungated and remains accessible at night.

Another ungated city park featuring meadows, woodlands and seemingly endless wide open spaces, Parco Nord is, as the name suggests, in the northern part of Milan. Like Parco di Trenno, it’s a peaceful space but it is still within the city, meaning visibility will still be affected somewhat by light pollution. 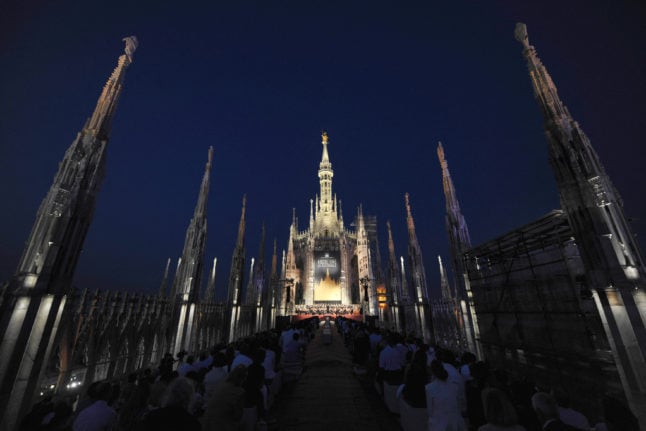 The roof of Milan’s duomo cathedral illuminated for a nighttime concert. Photo by GIUSEPPE CACACE / AFP.

A half hour train ride away from Bologna city centre, the Planetarium of San Giovanni in Persiceto is hosting a series of events from 9.30-11.30pm on August 10th, 11th and 12th.

Entry is free and no advance booking is required; attendees are invited to lie down on the lawn to look up at the sky.

Villa Ghigi, just outside the city in the southwest, is a recommended spot for stargazing, as is Parco Cavaioni a little further out.

Closer to the city centre (with its attendant light pollution) there’s Villa Spada and the Giardini Margherita. 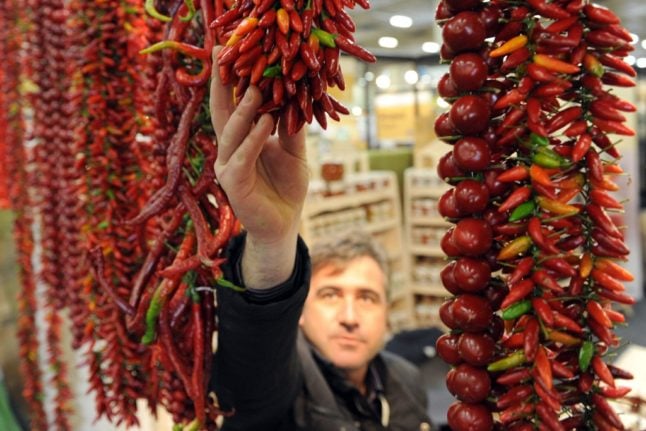 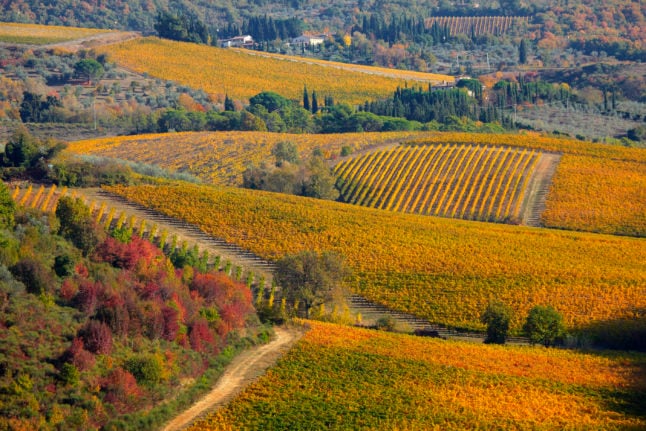 DISCOVER ITALY
Nine things to do in Italy this autumn

Autumn is widely considered one of the best times to visit Italy, thanks to smaller crowds, temperate weather, gorgeous natural landscapes, and delicious seasonal food.

So where should you start? From harvest fairs to chocolate exhibitions to cultural and religious festivals, here’s what we recommend doing in Italy this autumn.

On Sunday October 15th and Sunday 16th, more than 700 cultural sites across Italy open their doors to the public with Giornate FAI d’Autunno, or ‘FAI Autumn days’, a programme organised by the cultural heritage society Fondo Ambiente Italiano.

Many of the participating sites, including villas, castles, churches, abbeys, parks, and theatres, are not usually open to the public or are otherwise difficult to visit.

Entry is free but donations are encouraged. You can find more on which sites will be open and instructions for visiting each one (some require advance online booking) on FAI’s website here.

READ ALSO: How to see Italy’s ‘hidden’ cultural sites for free this weekend

Let off steam in a hot spring

From Sicily to Lombardy, Italy has a wealth of natural hot springs, and as the weather starts to cool off, autumn is the perfect time of year to test them out.

Some – like the stunning Terme di Saturnia or the Bagni San Filippo in Tuscany – are ‘wild’ natural hot springs that anyone can visit free of charge. 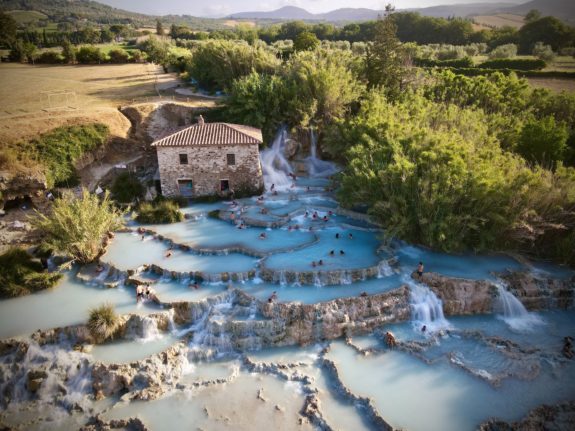 TRAVEL: Eight of the best destinations for an autumn break in Italy

Others, like Il Bagnaccio, are formed of man-made clay pools and run by associations that charge a small entry fee; others still are in luxury hotel spa complexes and are priced accordingly.

The range of options means whatever your preferences (and budget), you’re bound to find a hot spring for you.

Fill up at a sagra

A sagra could last for several weeks or one day, and might consist of anything from a raucous celebration with music and dancing to a lone food stall with a few wooden benches. It will usually be hosted in a field or a piazza, and entry is free.

A man sells marzipan treats at a festival in Catania, Sicily. Photo by MARCELLO PATERNOSTRO / AFP.

Sagra: The best Italian food festivals to visit in October

It’s partly a chance to sample local delicacies, from mushrooms to apples to wine, and partly an opportunity to experience local traditions, as sagre have their origins in ancient pagan thanksgiving rituals.

There are hundreds of sagre held across the country each autumn; you can find some of those happening in October here.

Italy’s lush landscapes take on a whole new appearance in autumn, when streaks of red, gold and brown ripple through its hills and valleys.

The Foreste Casentinesi National Park and the valleys of Piedmont are particularly recommended for their autumn colours, but Italy has so much unspoiled nature that even if you’re based in a city you can expect to find a range of scenic hikes just a short drive or train ride away. 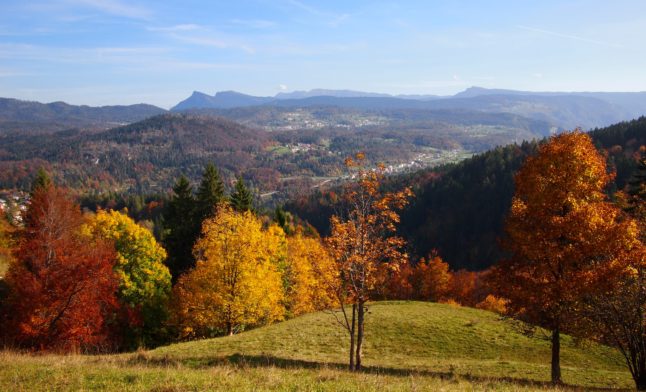 Autumn in Folgaria, Trentino. Photo by Stefano Segato on Unsplash

If you’re not especially mobile, that doesn’t matter – there are plenty of Italians who like to immerse themselves natural beauty without physically exerting themselves, which means there are often restaurants or picnic spots with their own panoramic views just off the road at the start of hiking trails.

If you’re looking for a scenic train ride, the Foliage Train connecting Domodossola in Piedmont with Locarno in Switzerland is reputed to be particularly beautiful this time of year.

If you’re driving through the Italian countryside in the autumn, you’re bound to see empty cars parked haphazardly on the side of the road at various points.

That’s how you know you’ve happened upon a good foraging spot. Chestnuts, hazelnuts, and blackberries are some of the more popular items to forage at this time of year, but the real enthusiasts are the ones searching for mushrooms. 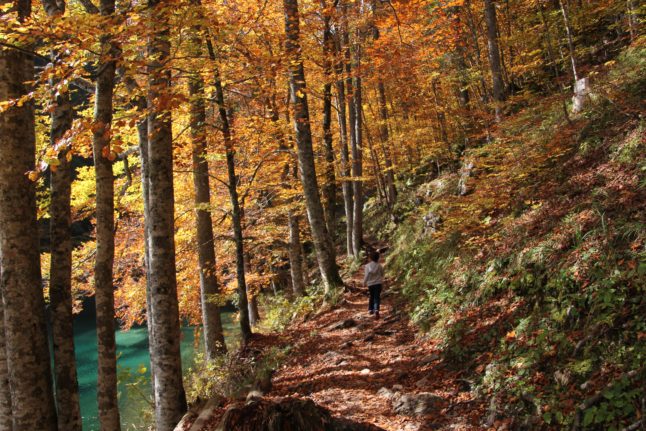 There’s a bounty of treats to be gathered from Italy’s forest floor in the autumn. Photo by Hasmik Ghazaryan Olson on Unsplash

As mushroom gathering tends to be considered a step up from other types of foraging in terms of both the knowledge required and the potential environmental impact, it’s regulated in Italy.

You’ll need to purchase a permit, and in some Italian regions you’re also required to take a course; partly so you can learn which mushrooms are safe to eat, and partly to protect the natural ecosystem.

Because fresh local produce is so central to Italian cooking, it’s a good idea to eat with the seasons in Italy.

You can order porcini mushroom tagliatelle at many restaurants out of season, but that doesn’t necessarily mean you should – the mushrooms will either have been frozen or preserved in vinegar, either of which will detract from their rich natural flavour. 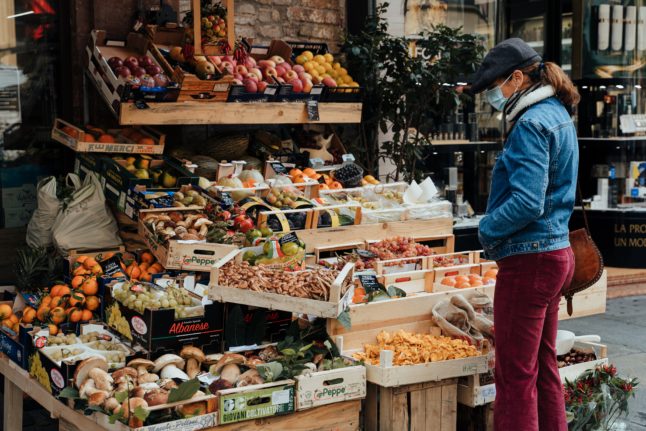 Porcini mushrooms are best enjoyed when in season. Photo by Gabriella Clare Marino on Unsplash

READ ALSO: Eight of the tastiest Italian foods for autumn

While less seasonally dependant, you’re also particularly likely to find game on the menu in the autumn in Italy, including wild boar, venison, goose, hare, pheasant, deer, and duck, often in warming stews.

Indulge at a chocolate fair

If dessert’s more your thing, fear not: there’s a wide range of chocolate festivals held in Italy in the autumn. Perhaps the most famous of these is the EuroChocolate exhibition in Perugia, home of the traditional Italian Baci chocolates, which this year will take place from October 14th-23rd.

From October 28th to November 6th you can head north to CioccolaTÒ in Turin – where the first chocolate-hazelnut spread, a precursor to Nutella named Giandutto, was invented – or Cioccoshow in Bologna, which this year is happening on November 17th-20th. 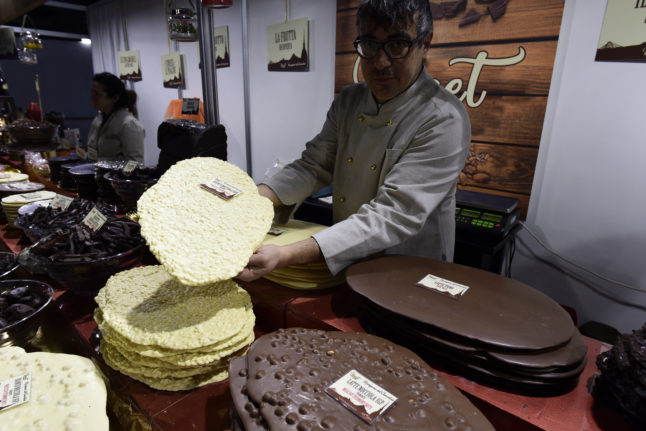 Wherever you are in Italy, it’s worth heading to your favourite cafe for a cup (which in reality is often a bowl) of hot chocolate – the Italian take on the drink is more of a dessert than a drink: a thick, dark, creamy, decadent concoction.

The Italian word ‘Ottobrata’ has more than one definition, being both the name for the pleasant late-summer weather most of Italy has for several weeks in October and the Sunday excursions the ancient Romans would make to the countryside to enjoy the weather and the wine harvest (a bit like the modern-day scampagnata).

The Ottobrata Zafferanese, though, is its own thing altogether: a cultural and food festival that has been held every Sunday of October since 1978 in the Sicilian town of Zafferana Etnea, it’s one of Italy’s most famous autumn fairs.

Nestled on the slopes of Mount Etna, with stunning views over the Ionian Sea, Zafferana Etnea is well worth a visit at any time of year, but if you come on an Ottobrata day you’ll be rewarded with musical and theatrical displays, artisan craft stalls, and guided food and drink tastings. 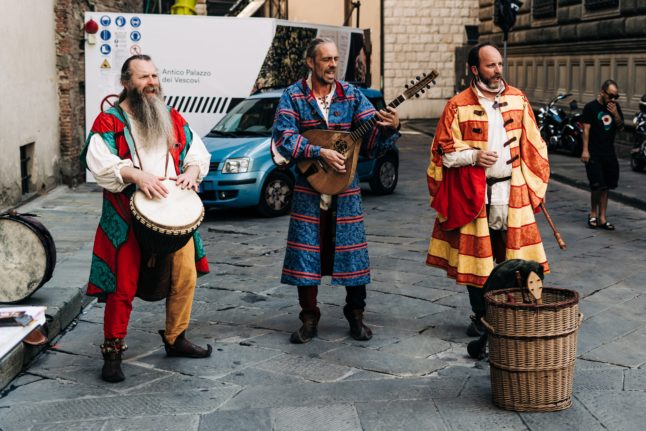 Musicians perform at a festival in Pistoia, Tuscany. Photo by Gabriella Clare Marino on Unsplash

In 1630-1631 the bubonic plague swept through northern Italy, so devastating Venice that in 1631 the city’s leaders organised a three-day worship procession begging the Virgin Mary to spare its citizens, and made a vow that they would build a church in her honour if she did. The plague passed, and the Basilica of Madonna della Salute was erected.

The occasion isn’t restricted to Venice – Trieste and various other towns in the Veneto region also observe the same date – but in Venice a temporary floating wooden votive bridge, traditionally buoyed by boats, is constructed to allow residents to cross the lagoon en masse and give thanks to the Madonna in the basilica named after her. 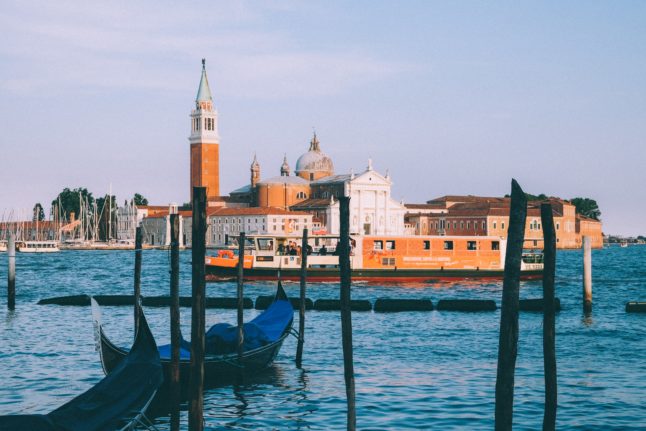 You’ll have the opportunity to participate in one of Venice’s many religious festivals in November. Photo by Daniel Corneschi on Unsplash
SHOW COMMENTS 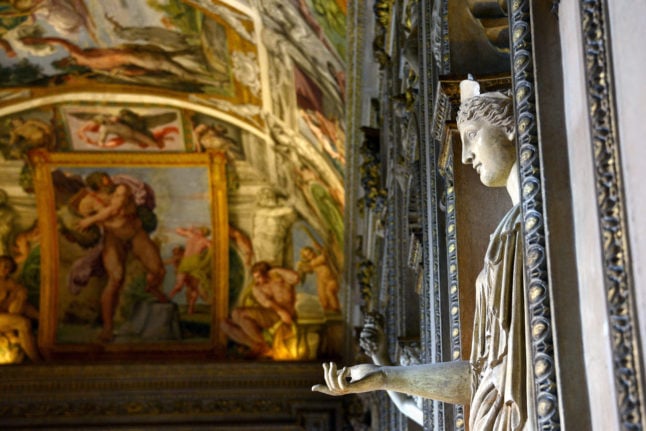