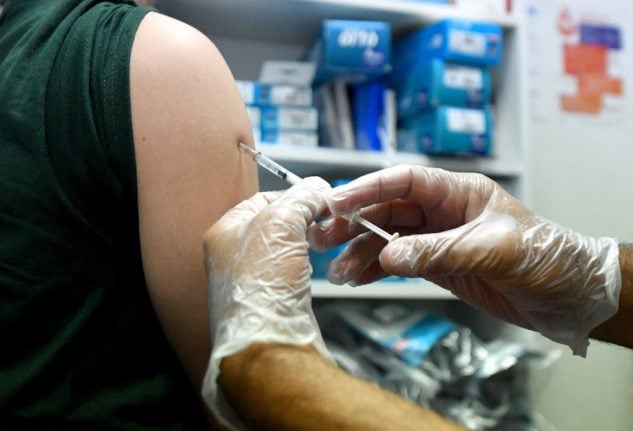 A pharmacist administers a dose of Imvanex, a vaccine to protect against Monkeypox, at a pharmacy in Lille, northern France (Photo by FRANCOIS LO PRESTI / AFP)

The current outbreak began in Europe in May, when the virus began spreading rapidly outside areas in Africa where it has long been endemic.

The virus, which is rarely fatal but can cause extremely painful lesions, has overwhelmingly affected men who have sex with men, some of whom have sought to swiftly get vaccinated.

However some countries have had much larger and quicker rollouts of the only approved vaccine for monkeypox, a smallpox jab produced by Danish firm Bavarian Nordic and marketed in Europe as Imvanex.

Belgium, for example, has just 3,000 doses, which are only available to LGBT sex workers, men who have sex with men with sexually transmitted infections or HIV, and some rare contact cases.

But neighbouring France has far more doses. While the exact number is unknown, more than 53,000 doses have already been administered in the country.

During the European summer many Belgians have popped over the border to get a jab.

Pharmacist Virginie Ceyssac said that 30 to 40 percent of those who had been vaccinated at her Aprium pharmacy in the northern French city of Lille were Belgians.

Samy Soussi of the Brussels-based HIV association ExAequo said that “thanks to word of mouth, we knew that it was possible for Belgians to be vaccinated in France”.

ExAequo even contacted Lille’s vaccination centre to organise carpooling for Belgians to attend a jab rollout day on August 6.

“444 Belgians were vaccinated that morning,” Soussi said, adding they were given a “very warm” welcome.

Around 90 percent of those vaccinated on the day were from Belgium, Lille’s town hall told AFP.

The Hauts-de-France region’s health agency said that its vaccination centres are asked to “respond favourably to requests from Belgian border residents, provided that it does not affect access to vaccinations for the French”.

In France’s capital, vaccinations have also been available for people from outside the country.

“Foreign tourists have taken advantage of their trip to get vaccinated,” said Checkpoint Paris, a sexual health centre dedicated to LGBT people.

However on France’s southern borders, Italians and Spaniards have been very much in the minority for vaccinations, according to local HIV organisations.

Switzerland meanwhile has had zero vaccine doses of its own, though the government bowed to growing criticism by announcing on Wednesday that it would buy 100,000 doses.

Lacking any local doses, “some people have gone to France to get vaccinated without any problems, but others have been refused,” said Alexandra Calmy, head of the HIV unit at Geneva University Hospitals.

Thomas, a 32-year-old in the Swiss town of Montreux, told AFP he spent a fortnight trying to get a vaccination appointment in France.

He eventually managed get an appointment in the eastern French city of Besancon.

A vaccination centre in the French Alpine town of Chambery in the Savoie department refused to give him an appointment.

The centre has been “overwhelmed with calls from Swiss people” and has had to turn them away due to a lack of resources, he added.

The French health ministry’s DGS directorate said it was up to vaccination sites whether they administer doses to foreigners.

After being denied an appointment in France, Sergio, a 41-year-old who lives in Geneva, looked farther afield. First he tried in his native Portugal, then in the United States, before finally getting an appointment in London.

“I paid almost 600 euros for a last-minute flight from Geneva to London,” he said.

“It’s expensive and it’s unfair because not everyone can do this… but everyone is afraid” of monkeypox, he said.

The inequality in access has spurred organisations and healthcare professionals across Europe to call for new diplomatic agreements for doses to be shared with countries in need.

“It is not logical that countries like France, Germany and the Netherlands have a great number of the vaccines” while countries like Spain — one of the world’s worst-hit countries — only has 17,000 doses, said Toni Poveda, director of the Spanish HIV organisation CESIDA.

“What we want is a concerted response at the European level, within the World Health Organization and not just European Union — because we have to include Switzerland,” he said.

French health authorities said they are in contact with Belgium and Switzerland to discuss cross-border monkeypox vaccinations, including financing.