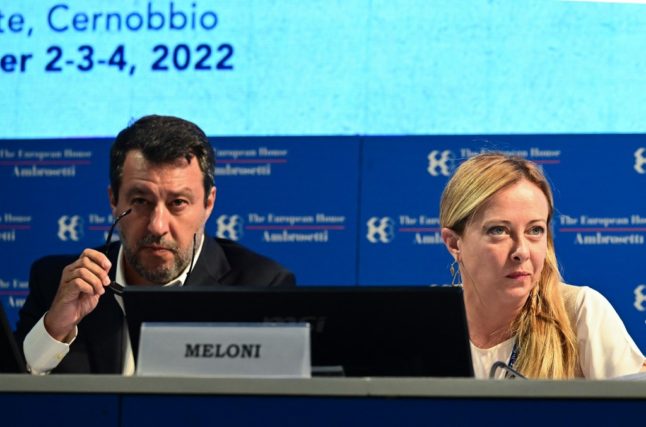 With just weeks to go until Italy’s general elections on Sunday, September 25th, splits are emerging between the two hard-right parties tipped to win power.

Giorgia Meloni’s post-fascist Brothers of Italy is leading opinion polls, putting her on course to become prime minister as part of a coalition with Matteo Salvini’s anti-immigrant League.

The pair are campaigning on a shared populist, eurosceptic, nationalist agenda, but in recent days have been increasingly at odds on how to respond to the energy crisis gripping Europe.

Salvini has called for more help for companies and workers facing soaring electricity and gas bills this winter, either at a European or Italian level – even if it means borrowing more.

“I prefer to put 30 billion in debt on the table today, than put 100 (billion) in two months time to pay for a million unemployed or redundant people,” he told Radio Capital on Tuesday.

He noted this put him at odds with outgoing Prime Minister Mario Draghi and also Meloni, who has sought to reassure international investors that the eurozone’s third largest economy will be safe in her hands.

“Going into further debt is the last resort, because Italy is already indebted out of control,” Meloni said last week.

Salvini, who in the past was open in his admiration of Russian President Vladimir Putin, has been critical of Western sanctions against Moscow for its invasion of Ukraine, saying they are not working.

He condemned Russia’s actions, but said on Tuesday: “The sanctions have been in operation for seven months, and we are on our knees, not Putin – and the war continues.”

“Let’s go ahead with sanctions, yes, but Europe must protect entrepreneurs, workers, traders,” he said, noting how the EU had mobilised billions of euros for countries — including Italy — hit by the coronavirus pandemic.

Meloni has strongly supported Ukraine and sanctions against Russia and on Sunday emphasised the importance of holding the line.

“A serious nation that wants to defend its interests must take a credible position,” she said.

Salvini’s League party won almost 18 percent of the vote in 2018 elections that brought him to power. But he has been losing support to Meloni for months, polling at just over half her tally of around 24 percent.

FdI continues to enjoy the largest share of the vote, according to opinion polls. The right-wing coalition, along with Berlusconi’s Forza Italia, is expected to take some 46 percent at election overall.

While the centre-left Democratic Party is just behind FdI in the polls, it has not formed the alliances with other large parties needed to take a large enough share of the vote to challenge the right-wing coalition.

Asked by Radio Capital if the two parties would argue over Russia and other issues once in government, Salvini said: “absolutely not, we have a busy five years ahead. We have different origins and cultures, but it is a commitment.”

“I can’t wait for the 25th of September, from when for five years we will be judged by our work,” he added.