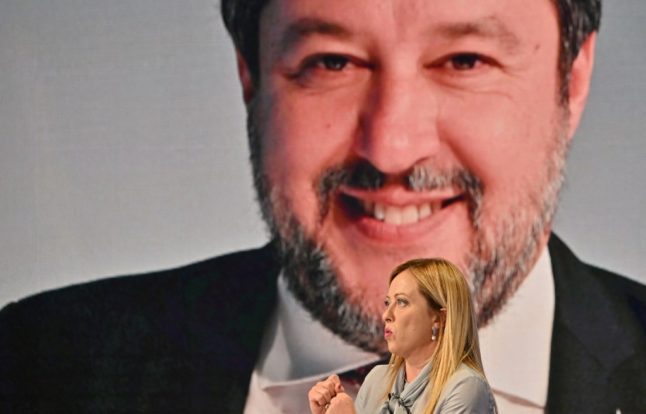 Fratelli d'Italia (Brothers of Italy) leader Giorgia Meloni speaks in front of an image of her coalition partner, League leader Matteo Salvini during the election campaign. Italian politicians are facing growing calls for an investigation into influence from Moscow. Photo by Alberto PIZZOLI / AFP

The US State Department this week released a summary of a recent intelligence review of Russian efforts to influence foreign politics, including funding for unnamed far-right nationalist parties.

According to the report, Russia has given over $300 million to foreign parties, officials and politicians in more than 20 countries since 2014.

The leaders of the Italian hard-right parties expected to win the upcoming election were quick to state that they were not funded by Russia.

“All our forms of financing are verifiable,” said Meloni in an interview with Radio 24.

“I’m certain that Brothers of Italy does not take foreign money”.

Salvini told RTL 102.5 he had “never asked for, and never taken” money from Russia.

Salvini, who is known for his admiration for Russian President Vladimir Putin, has repeatedly denied receiving money from Russia after a recording was leaked in 2019 of one of his aides discussing a secret oil deal in Moscow.

“Investigations have been open for years and nothing has ever been found because there is nothing to find,” he claimed on Wednesday.

Salvini was earlier this year found to have accepted a ticket to Moscow paid for by the Russian embassy, ostensibly for peace talks over Ukraine.

The trip was cancelled and the money reportedly paid back.

Silvio Berlusconi, the leader of the Forza Italy party also running for election along with the League and FdI as part of the right-wing coalition, has not commented so far on accusations of Italian parties being funded or supported by Russia.

Berlusconi is known for having a friendship with Vladimir Putin stretching back two decades.

Giuseppe Conte, leader of the Five Star Movement, which has opposed the sending of more arms to Ukraine, said his party was “transparent” and had no links to Russian funding. He said the alleged interference risked “polluting the electoral campaign with insinuations and inferences.”

There was “no news” of Italian parties being mentioned specifically in the US report at the moment, Adolfo Urso, president of the Italian parliament’s Copasir intelligence oversight board, told national broadcaster Rai.

The report sparked renewed calls for investigations into Russia’s influence over Italian politics, with left-wing politicians calling for any individuals and parties involved to be named before the vote.

He said the current government should reveal anything it knows about Russian influence in politics before the general election.

He also alleged that the League has not cut its longstanding ties with the United Russia party that backs Putin.

There has been growing concern over potential interference by Russia in Italian politics since the collapse of the government led by current prime minister Mario Draghi in late July.

The collapse was triggered by parties including the League and Forza Italia, which are known to have historically friendly relations with Moscow.

All parties involved have denied accusations from opponents that their actions were in any way influenced by Russia.

Draghi told parliament in July that Italy must “step up efforts to combat interference from Russia and other autocracies in our politics”.