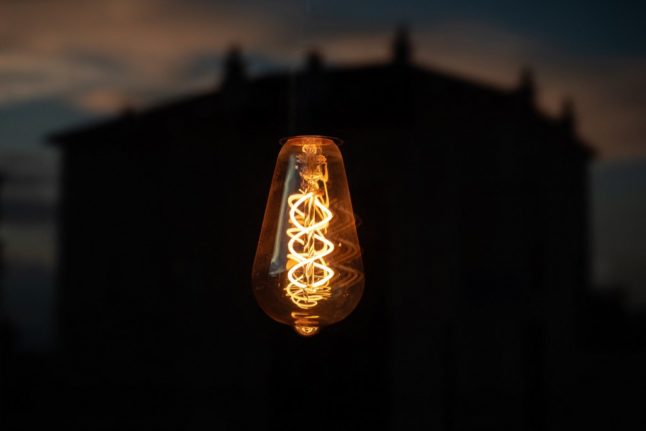 From capped prices to an ‘energy recovery fund’, here are the parties' proposals to help households and businesses struggling with energy bills. Photo by Fabrice COFFRINI / AFP

As soaring energy prices continue to pile pressure on Italian businesses and households – another cost-of-living aid package is now being drafted – Italy’s main political parties have placed the current energy crisis at the core of their manifestos ahead of the elections on Sunday, September 25th.

Though all parties seem committed to weaning the country off its dependence on Russian gas and developing alternative energy sources, proposals vary greatly from one side of the political spectrum to the other.

READ ALSO: EXPLAINED: How much are energy bills rising in Italy?

To give you an idea of who’s saying what, here’s an overview of how Italian parties plan on tackling the energy crisis.

Here are the PD’s main policies on the subject: 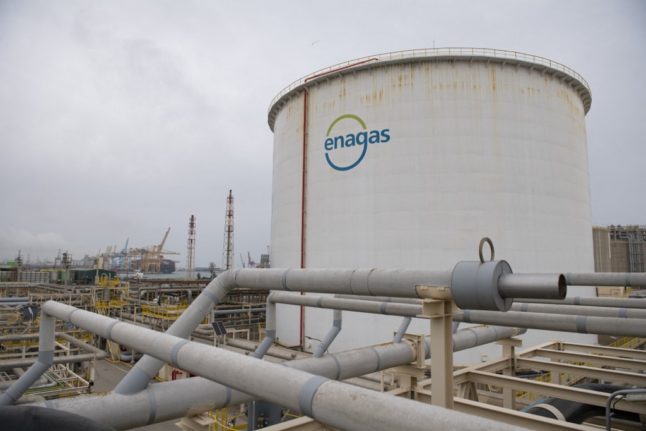 The Democratic Party sees regasification plants as a ‘temporary solution’ that should be abandoned well before 2050. Photo by Josep LAGO / AFP

Led by former premier Giuseppe Conte, M5S places renewable energy and improving buildings’ energy efficiency at the centre of its programme. Here are the main policies:

The coalition of two relatively new centrist parties – Matteo Renzi’s Italia Viva and Carlo Calenda’s Azione – has made independence from Russian gas its primary concern in the energy field.

These are their main proposals: 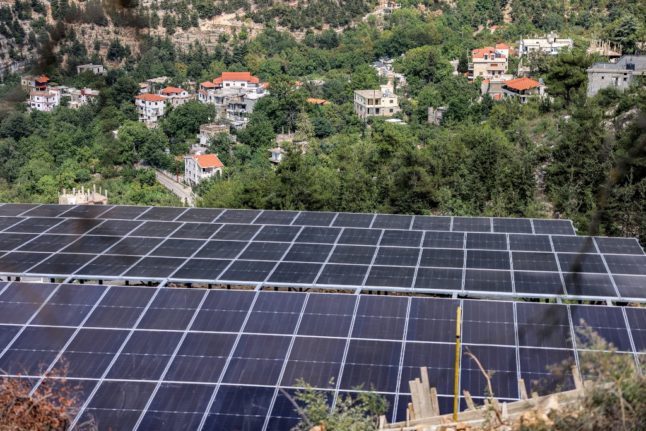 The alliance uniting Brothers of Italy, the League and Forza Italia is expected to win the elections, but it’s not clear what it would do to help businesses and families with rising energy bills once in government.

The coalition hasn’t gone into much detail about how they plan to tackle the energy crisis, with parties recently squabbling on whether or not the country’s public debt should be increased.

The individual manifestos of the parties making up the coalition offer some additional insight into their planned energy policies.

In its own programme, the League says it is committed to capping VAT at 5 percent for electricity bills and fuel duties.

Additionally, Salvini’s party plans on building “a national nuclear energy industry” centred around “last-generation nuclear reactors” – something which they regard as “vital” to achieving energetic independence and meeting the “zero emissions target by 2050”.

Italy outlawed nuclear power after the Chernobyl disaster, but a return to nuclear energy would be in the cards should the right-wing bloc win the next elections. Photo by Filippo MONTEFORTE / AFP

Brothers of Italy, led by Giorgia Meloni, says it wants to impose greater taxation on energy companies’ “extra profits” – the resulting funds, they say, would be used to help struggling families and businesses.

The party also says it backs a European cap on gas prices and will consider guaranteeing minimum levels of gas and electricity supplies for households who’ve missed bill payments.

Find all the latest news on Italy’s elections here.

ITALIAN ELECTIONS
EXPLAINED: What will a far-right government mean for Italy?

Silvio Berlusconi has done it again – the 85-year-old former prime minister returns to parliament after winning a seat in Italy’s Senate. He does so nine years after being forced out of Palazzo Madama for tax fraud.

Berlusconi’s Forza Italia was celebrating on Monday after a right-wing coalition led by Giorgia Meloni and her post-fascist Brothers of Italy party triumphed at the ballot boxes.

The media mogul, who has been recently dubbed “the immortal” for his longevity in politics, scored a seat in Monza, Lombardy, where he owns a Serie A football club. 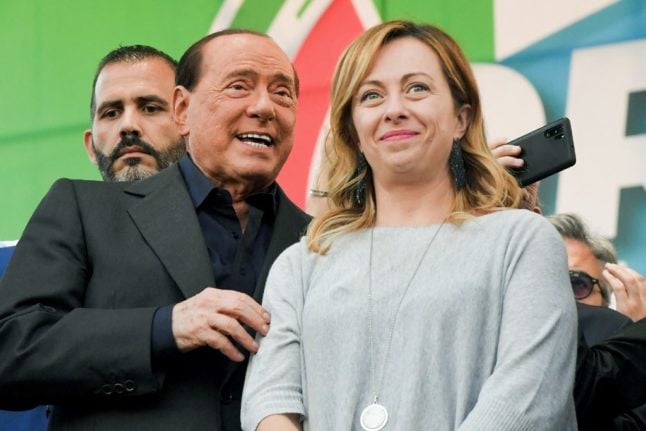 Berlusconi will be one of the key members of the new Italian government together with Matteo Salvini and Giorgia Meloni, currently poised to be the new PM. Photo by Tiziana FABI / AFP

The billionaire was forced out of the upper house of parliament in 2013 after being convicted of corporate tax fraud.

It was a heavy blow for the cavaliere’s political career, one which, in Berlusconi’s words, marked a “day of mourning for democracy”.

The three-time former premier was ordered to serve community service and was banned from holding elected office. That ban expired in 2018 but it would take Berlusconi a while to recover his shine.

His bid to become Italy’s head of state failed in January. But, at his ninth general election – likely his last – Berlusconi bounced back.

He campaigned largely on social media, snapping up over 600,000 followers on TikTok in just a month, and wooing the youth vote with (slightly awkward) grandad jokes.

In one video, which was watched over one million times, he interrupted himself to brag about killing an enormous fly. In another, he joked about stealing young men’s girlfriends.

Berlusconi, who burst onto the political scene 28 years ago, said he would be a father figure to Meloni, 45, and fellow coalition partner Matteo Salvini, 49.

He also said he would be a pro-European voice in what is expected to be Italy’s most right-wing government since World War II.

“I’m going to try to act as director in the government,” Berlusconi said after casting his vote. 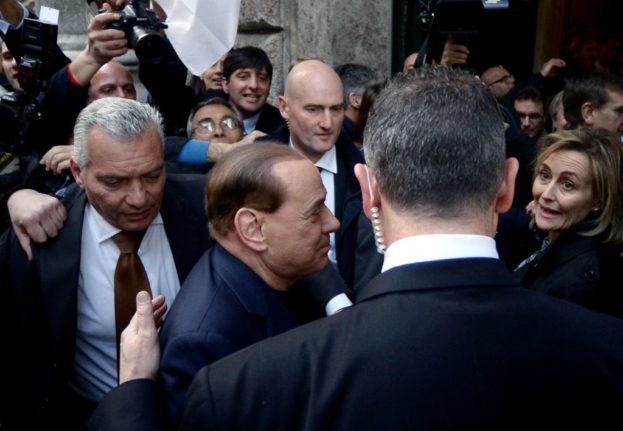 This is despite a series of health issues, including a fall at the start of the campaign which made it difficult for him to walk.

The conservative European People’s Party (EPP), the biggest group in the European Parliament, tweeted their congratulations to Berlusconi’s Forza Italia, which secured about eight percent of Sunday’s vote.

“We are confident that Forza Italia will guide the next government into a path that serves the best interests of the Italian people as part of a strong and stable Europe,” it said. 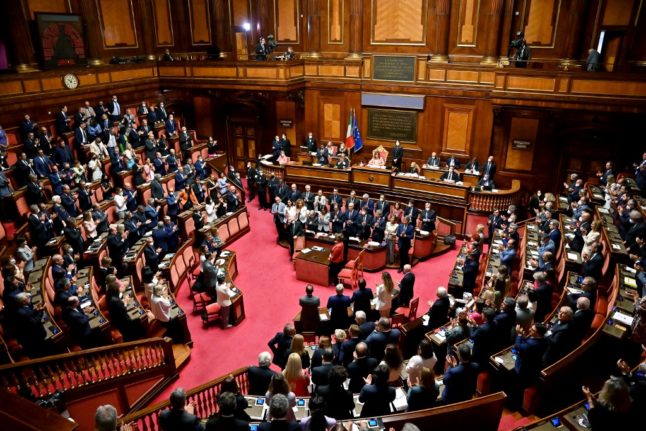