US President Joe Biden expressed concern over Italy’s recent elections, saying that ‘democracy is at stake’. Photo by Oliver CONTRERAS

President Joe Biden cited the far-right’s election success in Italy as evidence of what he regarded as a danger to democracy around the world, including in the United States.

“You just saw what’s happened in Italy in that election. You’re seeing what’s happening around the world,” Biden told Democratic party governors at a late meeting on Wednesday, referring to the win by far-right leader Giorgia Meloni in Italy.

“We can’t be sanguine about what’s happening here either,” Biden said, pointing to what he sees as anti-democratic forces led by former president Donald Trump in the run-up to November’s midterm elections.

Biden said that Chinese leader Xi Jinping had told him “straight up that democracies can’t be sustained in the 21st century”.

In the meantime, Italy’s outgoing PM Mario Draghi is set to receive one of Ukraine’s most prestigious awards from President Volodymyr Zelensky, Draghi’s press office said on Thursday. 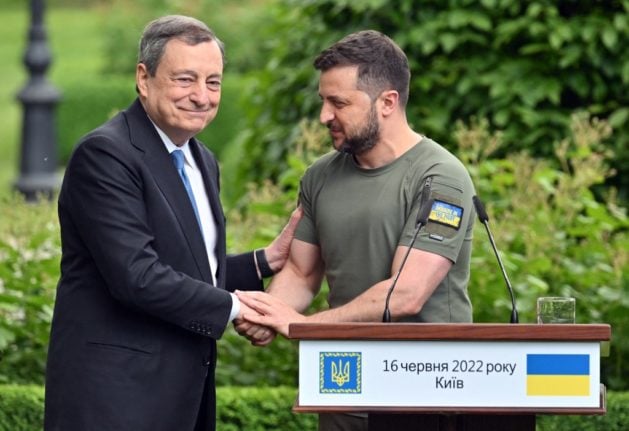 Draghi told Zelensky that he was “honoured and moved” to be given the Order of Prince Yaroslav the Wise of the first degree, and “happy to receive it from your hands in Kyiv”, according to Rome’s readout of a phone call between the pair.

Established in 1995 by President Leonid Kuchma, the Order of Prince Yaroslav the Wise, is awarded for services to the state and people of Ukraine. The medal of the order has a blue ribbon with a yellow stripe on each side.

Draghi has been one of the strongest backers of EU sanctions against Russia over the war, and Rome has sent several weapon shipments to help Kyiv.

In its own statement, the Ukrainian presidency’s office said Zelensky had praised Draghi’s role “among the names of political leaders who have supported Ukraine” since the start of Russia’s invasion.

Draghi will have to step down when a new government takes office following last Sunday’s elections, which were won by Giorgia Meloni’s far-right coalition.

After her victory, Meloni said Ukraine could count on Italy’s support.