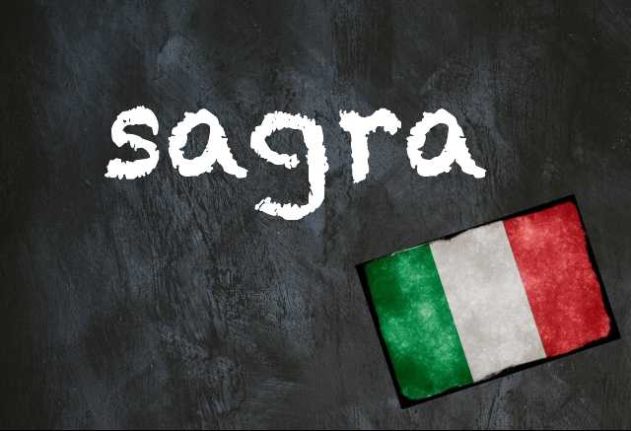 If you’ve spent any length of time in Italy, you’re probably familiar with the concept of the sagra: village fairs held all over the country throughout the autumn (and a few in the spring and summer) showcasing food and drink typical of the local area.

You might be harder pressed, though, to explain where the name comes from. Where did the sagra – both the tradition and the word – originate?

Readers with a keen ear may guess it’s linked to the word ‘sacred’, and they’d be right: it’s from the Latin sacer, which means just that.

But what do these food festivals – which may be accompanied by music, dancing and other cultural activities, but rarely feature any religious elements – have to do with the sacred?

Sagre have their origins in Roman harvest festivals dedicated to the gods, which involved thanksgiving processions followed by banquets attended by the whole town.

When Rome became Christianised, these pagan festivals became Christian occasions (much like Christmas), switching the object of worship while keeping the nature of the celebration much the same.

The Treccani dictionary notes that sagra in old Italian (at the time, the word could also be spelt as sacra) was a ‘solemn feast’ held to commemorate the foundation or consecration of a church or altar, or to honour a town’s patron saint.

These religious observances were often accompanied by markets and various street festivals; over time, the word sagra was increasingly used to refer to solely to the more secular aspects of the celebrations.

These days, a sagra rarely incorporates any religious elements unless it’s a very longstanding and established festival.

Most sagre simply focus on one particular food or drink item – be it truffles, porcini mushrooms, pork, wine or, yes, frogs – and offer tastings and workshops and demonstrate different cooking styles.

That doesn’t mean you won’t find any sagra with religious elements. If you’re looking for a more traditional event, Monza’s Sagra di San Gerardo in June features both a mass dedicated to the city’s patron saint – a statue of whom is ceremonially lowered into the River Lambro on this date, and a cherry fair.

It’ll hardly come as a surprise to any of you, but Italians have a very special relationship with food.

As such, many terms and expressions that originated within the confines of Italy’s vast culinary lingo have over time spilled over into other areas of life and are now regularly used to describe situations that have little or nothing to do with cuisine.

Now, the expression literally translates into English as ‘[anything] from cooked to raw food’, thus hyperbolically referring to the wide spectrum of dishes a cook could possibly prepare.

But, while its original meaning doesn’t really require any further explanation, what does the idiom mean outside of the cooking world?

Briefly, Italians use ‘di cotte e di crude’ to refer to all sorts of odd, surprising or unexpected things they might have done or experienced while also slyly avoiding going into great detail about them.

How did it go last night?
Oh, believe me, I really did all sorts of things.

Where did you go on holiday last summer?
I went to Ibiza. I got up to all kinds of things there…

As you can see from the above examples, ‘di cotte e di crude’ is generally used together with the verb ‘combinare’ (to get up to) or ‘fare’ (to do).

Regardless of the verb one chooses to use, it’s worth keeping in mind that the verb must always be preceded by the pronoun particle ‘ne’ (e.g. ne ho fatte, ne ho combinate, ne ho sentite, etc.).

And some native speakers might choose to use ‘di tutti i colori’ (which literally translates into English as ‘[things] of all colours’) instead of ‘di cotte e di crude’.

The two expressions have exactly the same meaning and they require the same grammatical construction (‘ne’ plus verb plus idiom). As such, they’re totally interchangeable.