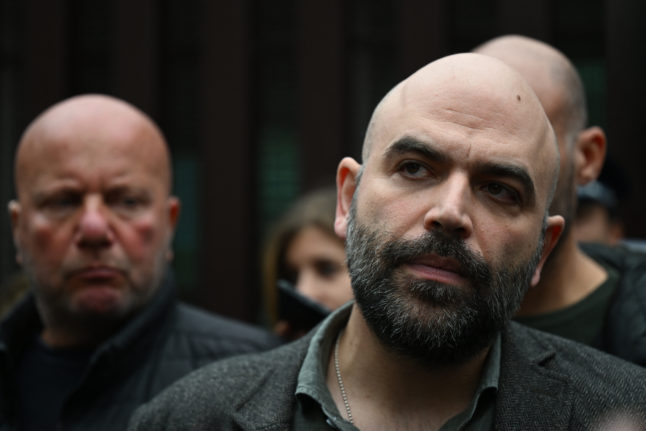 Meloni’s Brothers of Italy party was in opposition at the time, but took office last month after triumphing at the polls on a nationalist campaign that promised to stop migrants crossing the Mediterranean from North Africa.

Saviano, best known for his international mafia bestseller “Gomorrah”, risks up to three years in prison if convicted.

In a short speech outside the Rome court, he said Meloni’s attack on those who save lives at sea was “inhuman”.

The case dates back to December 2020 when he was asked on a political TV chat show for a comment on the death of a six-month-old baby from Guinea in a shipwreck.

The baby, Joseph, had been one of 111 migrants rescued by the Open Arms charity ship, but he died before he could receive medical attention.

In footage shot by rescuers and shown to Saviano on the chat show, the baby’s mother – who has just been pulled from the sea without Joseph – can be heard weeping “Where’s my baby? Help, I lose my baby!”

A visibly emotional Saviano blasted Meloni and Matteo Salvini, the leader of the anti-immigrant League party, which is now part of her coalition government – both of whom have long used anti-migrant rhetoric.

“I just want to say to Meloni, and Salvini, you bastards! How could you?” Saviano said on the show.

Meloni said in 2019 that charity vessels which rescue migrants “should be sunk”, while Salvini, as interior minister that same year, blocked such vessels from docking.

Salvini joined the criminal proceedings on Tuesday as a civil party seeking damages.

In a speech read out to journalists outside the court after the hearing, Saviano said that he had used the term bastards to highlight the damage done by Meloni and Salvini’s “lies” about charity rescuers.

“How could you be so thoughtless as to isolate, to smear, to transform sea ambulances into pirate ships?” he said.

The judge set the next hearing for December 12.

PEN International, an organisation that defends free speech, sent an open letter to Meloni last week urging her to drop the case.

Ahead of the trial Saviano, 43, told AFP it was an “unequal confrontation, decidedly grotesque”, while press freedom groups warned it sent a “chilling message” to journalists.

The author, who has been under police protection since publishing “Gomorrah” due to threats from the Naples “Camorra” mafia, said the tactic was to “intimidate one in order to intimidate 100”.

“It will be even more difficult (for journalists) to report on what is happening” if their words are “put on trial when they criticise power and its inhuman policies,” Saviano said.

Watchdogs say such trials are symbolic of a culture in Italy in which public figures – often politicians – intimidate reporters with repeated lawsuits.

Meloni’s lawyer Luca Libra said Tuesday there was no intention of “intimidating” anyone.

His client was “just a woman who was insulted… on television in front of millions of people”, he said.

Meloni would consider whether or not to withdraw the complaint, Libra added.

Italy ranked 58th in the 2022 world press freedom index published by Reporters Without Borders, the lowest level in western Europe.

Tuesday’s trial is not the only one Saviano faces for defamation. He was sued in 2018 by Salvini after calling him “Il Ministro della Malavita”, or minister of the criminal underworld.

That trial is set to open in February.

Former Brazilian President Jair Bolsonaro has figured heavily in international news lately after hundreds of his supporters stormed government buildings in the capital Brasilia on Sunday, January 8th, in what has now been widely recognised as a failed coup.

And though there is currently no evidence that Bolsonaro directly ordered Sunday’s insurrection, Brazilian media reports suggest the former president may, in the words of Brazilian Senator Renan Calheiros, have to “answer for his crimes and be interrogated on the terrorist acts he always incited”.

It is precisely the prospect of legal prosecution that, in a turn of events very few would have been able to anticipate, might tie Bolsonaro’s fate to Italy.

Brazilian news media Istoè and O globo both recently reported that Bolsonaro, who has Italian origins, is currently planning on formally requesting Italian citizenship – a process which two of his five sons, Flavio and Eduardo, started back in 2020.

But why would becoming an Italian citizen allow Bolsonaro to evade prosecution in Brazil?

Bolsonaro is currently in Florida, USA, which he entered on December 30th, two days before his successor, Luiz Inacio Lula da Silva, was sworn in as the new Brazilian head of state. 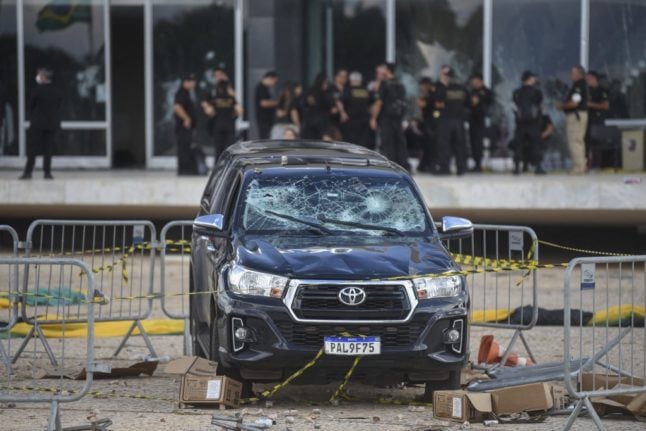 But his position in the US is shaky, to say the least. A single criminal charge – Bolsonaro is already under investigation in at least four pre-coup criminal probes – and sufficient evidence to show probable cause would be enough for the States to accept Brazil’s extradition request.

Conversely, as an Italian citizen residing in Italy, Bolsonaro would be most likely shielded from extradition as the current agreements between Rome and Brasilia exclude extradition for crimes of political nature and the Italian Constitution (article 26) bans the “extradition of [an Italian] citizen unless international conventions command so”.

So, it seems Bolsonaro would effectively be able to evade prosecution by acquiring Italian citizenship. But should he ultimately choose to request citizenship, how likely is it that he would be successful?

While there’s no way to predict what the final outcome would be, he’d have good chances, at least in theory.

Italy is far more lenient than other countries when it comes to allowing people to claim citizenship via ancestry (also known as ‘right of blood’ or jure sanguinis).

In fact, there are no limits on how far back up the line of descent the applicant’s Italian ancestor is located as long as the Italian national in question was alive on or after March 17th 1861, when the Kingdom of Italy was officially born.

Bolsonaro’s paternal great-grandfather, Vittorio Bolzonaro, moved to Brazil from Anguillara Veneta, Veneto in the late 1880s or early 1890s at the very latest. 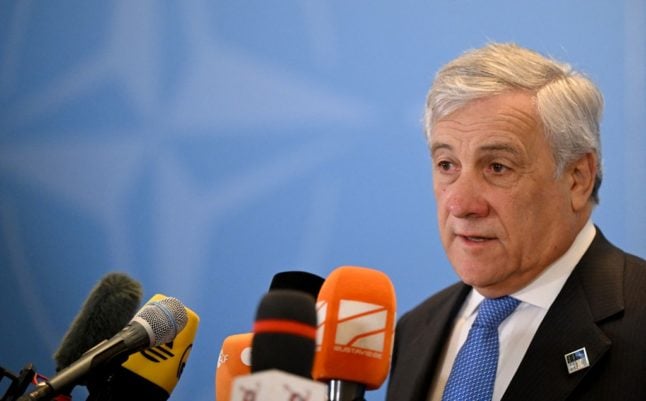 Italy’s foreign minister Antonio Tajani has recently confirmed that no request for Italian citizenship has been made yet by Bolsonaro. Photo by Daniel MIHAILESCU / AFP

There’s no way to know whether this requirement is actually met in Bolsonaro’s case, though, if it were, his path to acquiring Italian citizenship would be pretty clear.

As with all things Italian, the process of getting an Italian citizenship application approved is usually very lengthy (taking over three years in most cases). However, there is a ‘fast-track’ option which, while requiring the applicant to relocate to Italy and become a legal resident, cuts overall processing times to around one year.

So, should Bolsonaro ultimately go for the fast-track route – and provided that he applied immediately and all his documents (including birth, death and marriage certificates of all his relevant ancestors) were in order – the earliest he could become an Italian citizen would be at some point in 2024.

This is of course all purely hypothetical at present, especially as Italy’s foreign minister Antonio Tajani confirmed on Wednesday that Bolsonaro hasn’t (yet) submitted a request for Italian citizenship.

But the mere prospect of Brazil’s former president applying for citizenship has caused a stir within the Italian political landscape – several left-wing forces have already asked that the request be immediately rejected should it ever come through. 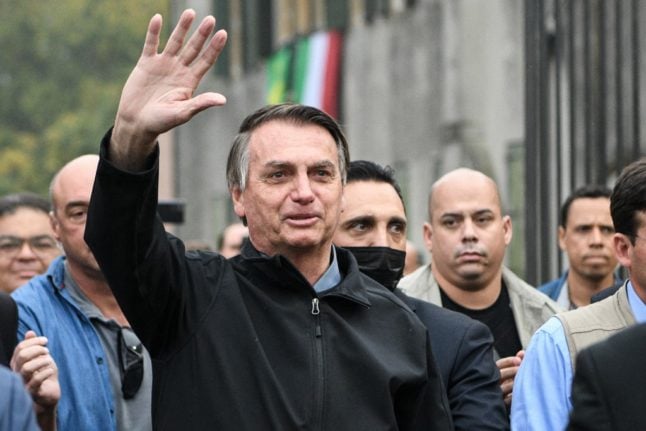 Bolsonaro already has honorary Italian citizenship, which was granted by the small town of Anguillara Veneta in 2021. Photo by Piero CRUCIATTI / AFP

“Before (possibly) giving Italian citizenship to the Bolsonaro family you must give it to all children born and living in Italy who wish to be Italian citizens,” said one.

The former president already has honorary Italian citizenship, granted by Anguillara Veneta, the small town Bolsonaro’s great-grandfather originally emigrated from. However, the town’s mayor is now under increasing pressure to revoke it.

Making Bolsonaro an honorary citizen was a “grave error then” but failing to revoke the award after Sunday’s events would be nothing short of “incomprehensible”, stated Veneto regional councillors Vanessa Camani and Andrea Zanoni, both with the Democratic Party.

As for the Italian government, PM Giorgia Meloni took to Twitter on Sunday to condemn the insurrection in Brasilia. However, neither she nor any other member of her cabinet have so far taken a stance on Bolsonaro’s contentious citizenship issue.

Also, at the time of writing, no member of the League, which largely supported Bolsonaro during his tenure as president and praised him as the “pride of Veneto” in October 2018, has spoken out on the topic.

Whether it’s just a bad bout of forgetfulness or deliberate reticence, the silence is deafening.