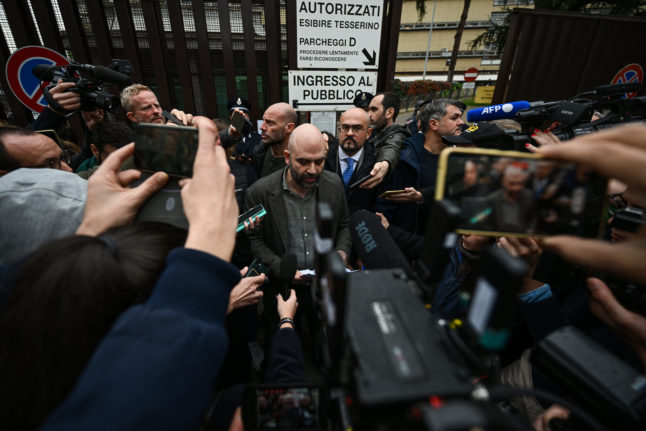 In 2022, Reports without Borders (RSF) ranked Italy as 58th in its World Press Freedom Index – the lowest level in western Europe and one of the lowest in Europe overall.

That’s 17 points lower than its 2021 ranking of 41st place – though RSF notes that it’s using a new methodology for its rankings this year, and care should be taken when drawing comparisons.

The only European countries that fared worse than Italy in the 2022 anking were Poland, Malta, Hungary, Albania and Greece.

“Twenty journalists are currently receiving round-the-clock police protection because they have been subjected to intimidation, death threats or attacks,” RSF says.

A 2022 report by the monitoring group Media Freedom Rapid Response (MFRR) found police reports of threats against journalists in Italy had risen by 42 percent between 2020 and 2021.

While organised crime was responsible for a significant number of threats – around 11 percent – more than half were motivated by political issues.

2. The new government has a hostile approach to the media

Both the current Italian prime minister, Giorgia Meloni, and a deputy prime minister, Matteo Salvini, are currently suing one of Italy’s most prominent journalists for “defamation” under a controversial law introduced under the Fascist regime in 1930.

The charges relate to a 2020 incident in which Saviano referred to Meloni and Matteo Salvini, leader of the anti-immigrant League party, as “bastards” on a talk show following a migrant shipwreck in which a six-month-old baby died.

PEN International, an organisation that defends free speech, sent an open letter to Meloni urging her to drop the case, while press freedom groups warned it sent a “chilling message” to journalists. 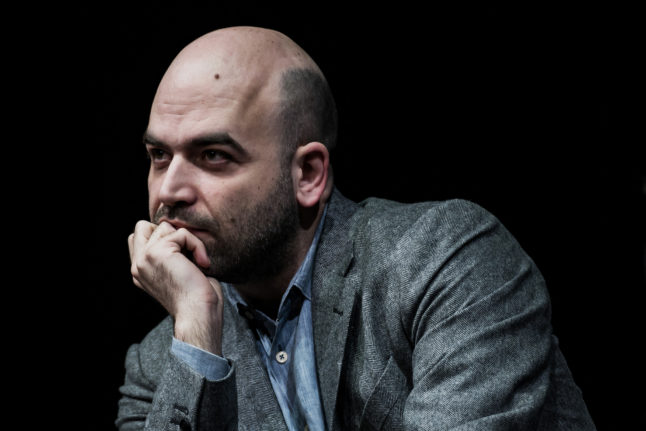 Meloni said in 2019 that charity vessels which rescue migrants “should be sunk”, while Salvini, as interior minister that same year, blocked such vessels from docking.

Saviano also faces another defamation trial in February for referring to Salvini as “Il Ministro della Malavita”, or minister of the criminal underworld.

When Salvini was interior minister in a former coalition government in 2018, he threatened to remove Saviano’s police escort.

The journalist has been under police protection for more than a decade after publishing his book ‘Gomorrah’, which examined the grip of the Camorra mafia group on Naples.

Meanwhile, Meloni has lashed out at the media in the past – reportedly calling Rai investigations show Report “trash journalism” after it aired an episode about her party’s social media accounts and allegations of fake followers publishing synchronised retweets.

In Italy defamation is a crime punishable by jail time, though court rulings over the past few years have emphasised that prison terms should only be handed out in “extreme circumstances”.

Under Article 595 of Italy’s penal code, the truth of an allegation is not in itself a valid defence against a criminal defamation charge; whether the offended party’s reputation has been damaged is also a key factor.

Italy’s Constitutional Court urged lawmakers in 2020 and 2021 to rewrite the law, saying jail time for such cases was unconstitutional and should only be resorted to in cases of “exceptional severity.”

Strategic lawsuits against public participation, or SLAPPS – frivolous suits brought against journalists in order to waste their time and resources – are considered by transparency campaigners to be a particular problem in Italy. 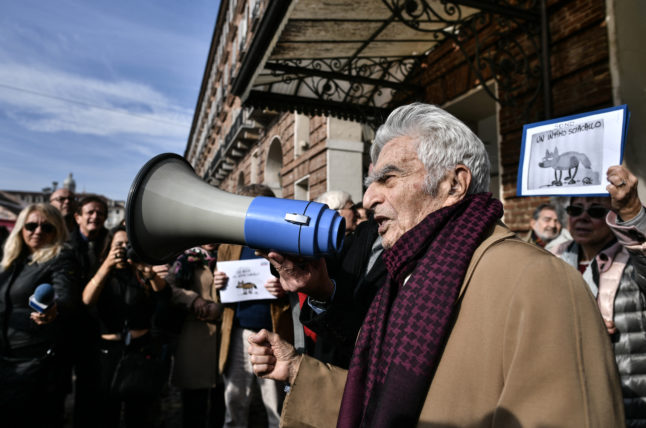 The Italian journalist, lawyer and politician Bruno Segre at a 2018 protest against against political attacks on the press. Photo by Marco BERTORELLO/AFP.

In its 2022 report, the MFRR said its team’s fact-finding mission “confirmed the existence of a widespread resort to SLAPPs against journalists in Italy.”

“Under these circumstances, self-censorship is seen by many journalists as the safest strategy, and an obvious consequence of a culture of SLAPPs,” the report says.

The infamous Vatileaks trials of 2016 provoked outrage among campaigners for press freedom, who argued that the Vatican City was attacking the media.

The acquittal of two journalists in that case – as well as several others in the same year – was seen as a victory for freedom of the media.

4. Mafia intimidation is a real and serious problem

The mafia is one of the biggest threats to free media in Italy. Particularly in the south of the country, reporters have fallen victim to a range of attacks by organized crime.

“Journalists who investigate organised crime and corruption are systematically threatened and sometimes subjected to physical violence, including arson attacks on their cars or homes,” says the most recent RSF profile on Italy.

“Online intimidation campaigns are orchestrated to “punish” journalists who have the courage to explore such sensitive issues as collusion between mafia families and local politicians,” it adds.

The 2022 MFRR report found the slowness of Italy’s criminal justice system can put journalists who cover the mafia in danger. 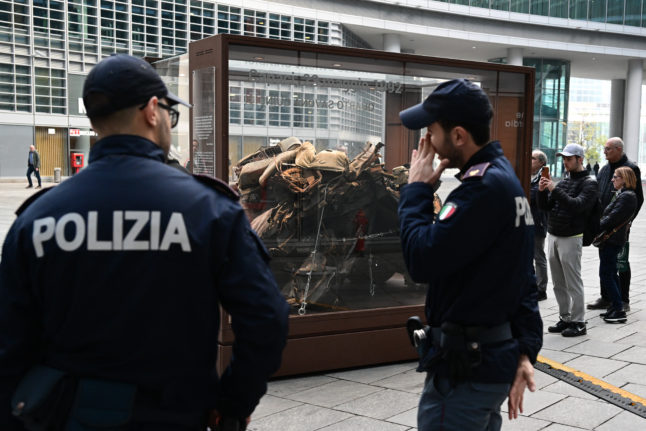 Police watch an exhibit containing the remains of the escort car of Italian judge Giovanni Falcone, who was assassinated by the mafia in 1992. Photo by Miguel MEDINA / AFP.

A 2015 assault on journalist Luciana Esposito for her reporting on the criminal activities of the camorra in Ponticelli was not tried until 2022, it said. Her three attackers were subsequently convicted.

Protection for journalists is also subject to the discretion of individual politicians.

Until relatively recently, journalists wishing to access information had to rely on various vague provisions under several different laws, as there was no universal Freedom of Information Act.

The right to access administrative documents was introduced in 1990, but required a “legal interest”, meaning it was often difficult for journalists to get information needed for investigative reporting.

Under Matteo Renzi’s government, the Freedom of Information Act came into force in December 2016.

Renzi’s administration also declassified some documents such as those relating to terrorist attacks, as well as creating a portal detailing where and how public funds were spent.

However, in December 2017 the next Democratic Party government passed a controversial law that forbids the publication of wiretapped conversations unless they’re deemed “relevant” to a criminal trial.

Journalists complained that the law, which instructs police to seal any “irrelevant” excerpts as secret, would hamper their ability to investigate and publish stories in the public interest.

In the early days of the Covid pandemic in 2020, Italy temporarily suspended the right to freedom of information except in urgent cases, sparking concern from journalists and campaigners.

6. Italian political parties and politicians have a strong influence over the media

The head of Italy’s national broadcaster Rai is appointed by politicians; when the outgoing director’s term ends, the government and parliament choose their replacement.

According to a 2018 guide by the La Stampa newspaper, other positions in Rai are also made by political appointment, with Rai 1 getting the ‘pro-government’ share, Rai 2 going to the centre-right parties, and Rai 3 to the centre-left.

Former prime minister and current senator Silvio Berlusconi, who leads Forza Italia – one of the three parties in Italy’s coalition government – is a media tycoon who in 2012 controlled around 90 percent of Italian broadcast media outlets, according to estimates from the European Federation of Journalists. 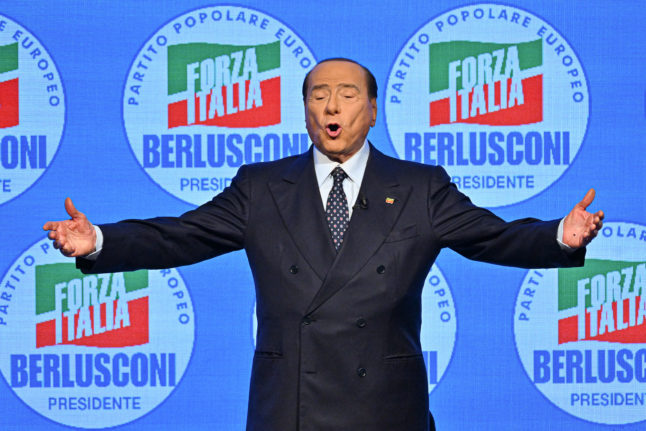 In the lead up to Italy’s 2022 presidential election, Reuters reported on Berlusconi’s use of his media empire to promote his bid, including a full-page ad in Il Giornale that made factually inaccurate statements and claimed the politician had ended the Cold War.

Most media outlets receive state funding or have longstanding ties to political parties, and what’s more, the board of regulatory body Agcom is appointed by parliament.