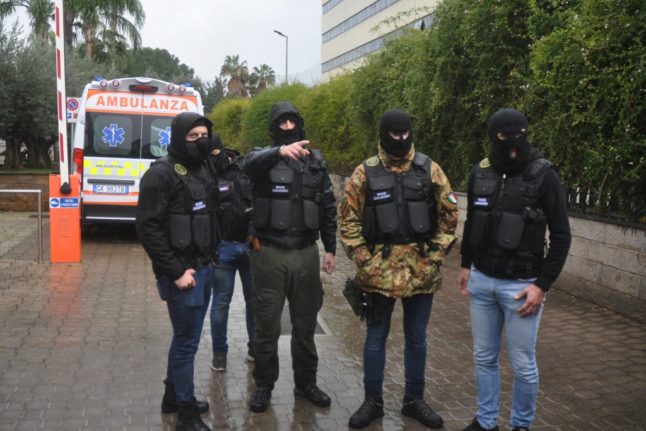 Italian anti-mafia police officers after the arrest of Matteo Messina Denaro on January 16th in his native Sicily after 30 years on the run. (Photo by Alessandro FUCARINI / AFP)

“With the people I have killed myself, I could fill a cemetery,” he is said to have boasted.

The quote is impossible to confirm, but speaks to the legend that surrounds him.

READ ALSO: Italy arrests ‘most wanted’ mafia boss after 30 years on the run

Known as Diabolik, after an Italian comic character, he was the undisputed leader of the Cosa Nostra in the Trapani province of western Sicily.

But his power extended further, including to the capital Palermo, where he was arrested.

A fan of Rolex watches and designer clothes – as well as comic books and video games – he had a reputation as a playboy, and was once featured on an Italian magazine cover in dark glasses, looking like a rock star.

But his list of victims was long and his crimes horrific, not least the murder of the teenage son of a turncoat.

The boy was kidnapped and held captive for two years and his body then dissolved in acid.

Born on April 26, 1962, in Castelvetrano, in southwest Sicily, MessinaDenaro grew up in the heart of organised crime.

His father, Don Ciccio, was the head of the local clan and his godfather, who attended his baptism, was also a member of the mob.

23 November 1993, 12-year-old Giuseppe Di Matteo (photo) is horse-riding, his great passion, at stables in Piana degli Albanesi in the province of Palermo. During a break, a group of men in police uniform come up to him, saying they have orders to take him to see his father >> 2 pic.twitter.com/S6KIXiABet

His first run-ins with the law began in 1989, when he took part in a bloody struggle between two clans.

He was accused that year of murdering Nicola Consales, a hotel owner who complained to an employee of always having “these little mafiosos under our feet”.

In 1992, he was part of a mob group sent to Rome to try and kill anti-mafia judge Giovanni Falcone.

The group was eventually recalled by Toto Riina, the Corleone boss dubbed “the Beast”, who decided on another approach. Falcone was murdered in a car bomb near Palermo on May 23, 1992.

Messina Denaro himself was ruthless throughout his career.

In July 1992, after taking part in the murder of Vincenzo Milazzo, the head of the rival Alcamo clan, he strangled the latter’s partner, who was three months pregnant.

The two bodies were buried in the countryside.

As head of the Castelvetrano clan, he was allied to the Corleonesi clan, who were immortalised in the legendary Godfather films.

Matteo Messina, Italy's most-wanted mob boss, has been arrested in Palermo, Sicily, after 30 years on the run. Among other crimes, he's implicated in the 1992 bombing murders of judges Giovanni Falcone and Paolo Borsellino – both staunch opponents of organized crime. pic.twitter.com/KcCSFGmn1U

After Riina was arrested in January 1993, Messina Denaro continued his strategy of all-out terror, providing logistical support to bombings in Florence, Milan and Rome that year, which killed 10 people and wounded around 100.

In November 1993, a court later found, he was one of the organisers of the kidnapping of Giuseppe Di Matteo, then 12, whose father was a member of the powerful Cosa Nostra clan and was involved in the murder of antimafia magistrate Giovanni Falcone – and had given testimony about the killing.

In one of the most notorious Cosa Nostra incidents, the boy was held for 779 days before being strangled and his body dissolved in acid.

Messina Denaro had disappeared from public view in the summer of 1993,beginning what would be 30 years on the run from accusations including mafia association, murder, theft and possession of explosives.

In 1994 and 1996, statements from mobsters who turned state witness shed some light on his role within Cosa Nostra.

In 2000, after a ‘maxi-trial’ against the Sicilian Mafia in Trapani, he was sentenced in absentia to life imprisonment.

During his decades as a wanted man, Messina Denaro managed his affairs by communicating under the pseudonym “Alessio” through the pizzini system, where messages were left on tiny bits of paper.

His whereabouts and his activities during that time were subject to intense rumour, including that he had plastic surgery to render his appearance unrecognisable.

He had numerous sources of revenue, from drug trafficking to gambling, both in Italy and abroad.

In 2015, an Italian prosecutor on his trail, Teresa Principato, said he had likely eluded capture for so long because he was protected “at a very high level”.

She did not say whether this meant Cosa Nostra, politicians or institutions.

“We have confirmation of his presence in Brasil, Spain, Britain, Austria. He travels for extremely high-level business, and his return to Sicily isirregular and increasingly infrequent,” she told Il Fatto Quotidiano daily at the time.

In 2020, several of Messina Denaro’s collaborators were arrested, tightening the net around the boss.

And in October that year, he was again sentenced in absentia for his role in Falcone’s murder.