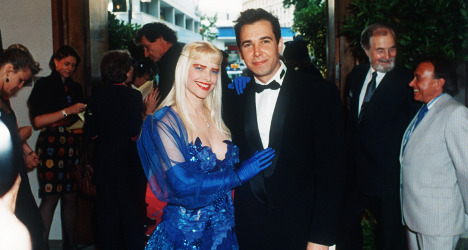 Why is she in the news this week?

On Thursday she announced she'd be standing in Rome’s city council elections at the end of May, as a candidate for Italy’s Liberal Party.

How did she end up as a politician?

In 1987, she finally won a seat in the Italian parliament as a member of the Radical Party – having polled 20,000 votes. Afterwards, she championed human rights and supported campaigns against nuclear energy and NATO membership.

That same year, she married the controversial American artist Jeff Koons, with whom she had a son.

What did her husband think of her career?

‘Heaven’ was not to last, however, and in 1992, the couple announced they were going to file for divorce. In a statement Koons, then 36, said: ''The differences between our cultural and social standings are too great.”

Has she had any other men in her life?

"In her life" is perhaps a stretch but even Staller herself claims to have lost count of the number of men she's slept with. When the question was put to her in an interview with Italian radio station Radio 24, she said: “I’ve never counted them. More than 2,000, perhaps even 3,000 or 4,000 – I don’t know!”

Didn’t she record a few songs?

Yes, but if you'd asked any Italian about Cicciolina's pop career before the invention of the internet, then they'd probably have looked at you blankly.

The lyrics to her songs were often so explicit that they were banned it Italy. Among these was her most famous song ‘Muscolo Rosso’, which was dedicated to the penis – which went on to become a hit in France.

In 1990, the star famously featured in a music video for the song ‘Touched by the hand of Cicciolina’ by the British alternative rock band Pop Will Eat Itself. You can see the video below.

Tell me an interesting fact about her.

How about two? During her first job in the Italian parliament she reportedly offered to have sex with Iraqi leader Saddam Hussein to prevent the Gulf War. Needless to say, the offer was not taken up, and she lost her seat at the end of her term in 1991. But that didn’t stop her making the offer a second time in 2002.

Staller is also famed for delivering her political speeches with one breast exposed. Will she be doing so again? No one yet knows…

What does she plan to do if she gets elected?

When she announced her candidacy Staller said that she would be supporting “liberal, libertarian and environmentalist" issues. In addition, she wants to campaign to legalize prostitution, to decriminalize cannabis for medicinal use and to introduce a law in support of same-sex marriages.

What do people think of her in Italy?

While her supporters – or "Cicciolini" as she fondly calls them – often praise her for both her liberal views and her daring foray into the masculine world of Italian politics, Staller is unsurprisingly no stranger to controversy.

In 2011, she attracted many a raised eyebrow when it was revealed she would be receiving a yearly pension of €30,000 courtesy of the Italian state for five-year office in parliament.

What else does she have to say for herself?

Recently she was quoted by Italian business newspaper Il Sole 24 Ore, as saying: “Even Grillo [the leader of the protest party, the Five Star Movement] supports issues that I supported in 1989. He’s even put one of my speeches on the web, a sign that I was ahead of the times.

“I’m a courageous woman and free-thinking,” she added. “That’s why I decided to join the Liberal Party.”

Editor's Note: The Local's Italian Face of the Week is someone in the news who – for good or ill – has revealed something interesting about the country. Being selected as Italian of the Week is not necessarily an endorsement.