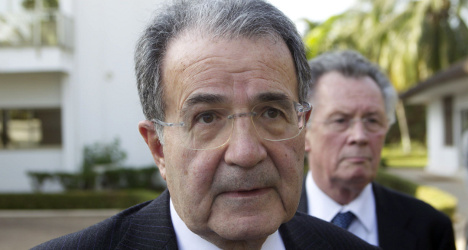 Italy's centre-left said on Friday it would back former prime minister Romano Prodi for president in a move likely to spark a fierce battle with the centre-right and dim hopes of an end any time soon to the two-month deadlock on forming a new government.

As parliament entered a second day of voting, the Democratic Party (PD) lead by Pier Luigi Bersani performed a sharp about-turn on an earlier bid to work together with the right and rushed to stem damage caused by Thursday's dramatic failure of its first favoured candidate.

Early favourite Franco Marini, an 80-year-old former speaker of the Senate, appeared to have been discarded after he failed to win the required two-thirds majority in Thursday's parliament ballot.

Bersani and rival Silvio Berlusconi had initially agreed to back Marini for the seven-year mandate but it quickly became clear that many leftist lawmakers had rebelled against their leadership.

The PD's more left-wing coalition partner, the small "Left, Ecology and Freedom" (SEL) party, refused to back Marini, as did the 38-year-old mayor of Florence, Matteo Renzi, and his web-savvy supporters – reformers who want to bring in a new generation of leaders for the PD.

Members of the PD's youth wing Thursday took matters into their own hands and staged a series of protests against Bersani's perceived dealings with Berlusconi, forcing the former Communist to re-group and propose Prodi – a candidate favoured by both Renzi and SEL.

However the decision was immediately scorned by the centre-right, with Berlusconi ally Fabrizio Cicchito accusing the left of "adopting a position of total opposition to us."

"This is one of the ugliest elections we have ever had," said Francesco Marchiano, a political columnist for the website Huffington Post Italia.

"It is taking place in a country essentially without a government, with parties unable to agree on anything," he said.

On Friday, the anti-establishment Five Star Movement said it would continue for now to support its candidate Stefano Rodota, a respected academic and human rights advocate.

Should no candidate win this round, there is likely to be another ballot held later Friday.

New names are cropping up as talks drag on, with former prime ministers Giuliano Amato and Massimo D'Alema among those often mentioned.

Should Bersani fail to get Prodi elected on the heels of his failure with Marini on Thursday, his job may be on the line. There have been growing calls for him to quit after he appeared to throw away a large lead over the centre-right at February's general election.

Renzi challenged Bersani for the party leadership in December and lost – but many within the party are now wondering whether he might have fared better
in the elections.

Bersani failed to get enough votes for an overall majority in parliament, with Berlusconi coming in a close second and the Five Star Movement led by mercurial comedian-turned-firebrand Beppe Grillo not far behind in third place.

The three have engaged in strident rhetoric and failed to agree on much over the past two months despite increasingly desperate pleas from big
business, trade unions and ordinary Italians as the country endures a painful recession.

Bersani has tried to woo Grillo so far to no avail and has also so far ruled out a "grand coalition" with Berlusconi — a move that would bring the internationally-mocked, scandal-tainted billionaire tycoon back to power.

Observers hope that a cross-party agreement on a new president could yield a broader deal on a new government, which is badly needed as outgoing Prime Minister Mario Monti's cabinet is limping on with only interim powers.

The new president will also have more clout than President Giorgio Napolitano, who was constitutionally prevented from dissolving parliament and calling repeat elections because he was in the last months of his mandate.

Analysts say the threat of another general election – an unnerving prospect for the financial markets — could help finally yield a compromise.