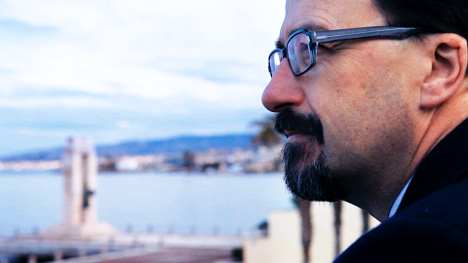 Bill Emmott, narrator and co-creator of the documentary film Girlfriend in a Coma.

Girlfriend in a Coma charts the terminal decline of a country long since sapped of the creative energy and industrial strength amassed in the first decades of the post-World War II era.

Just before February’s elections in Italy, the film made headlines when a national contemporary art museum under the auspices of the culture ministry abruptly cancelled the scheduled Italian premiere, a move its British narrator decried as government censorship and a symptom of much wider ills.

Indeed, the comatose “girlfriend” of the film’s title – itself borrowed from a song by The Smiths – is none other than Italy herself, one of the great loves of Bill Emmott’s life and a country whose future now hangs in the balance.

“I first ‘met’ Italy when I was 18 years old, driving in a camper van with three of my friends,” Emmott tells The Local.

Almost three decades would pass, however, before the relationship fully blossomed. The defining moment arrived in 2001 when, as chief editor of The Economist, he ran a front-page cover that deemed Silvio Berlusconi “unfit to lead Italy”.

A furious Berlusconi likened the bearded journalist to Lenin and clumsily labelled him an Ecommunist. In the legal dust-up that followed, Emmott rediscovered his fascination with Italy.

He began meeting for coffee with the film’s Italian director, Annalisa Piras, who at the time was London correspondent for the news magazine L’Espresso. Their discussions helped him fathom the depths to which Italy had sunk.

“The re-election of Berlusconi in 2001, followed by all the things he did to undermine the rule of law and change the laws in his own interests, both business and personal, got me trying to work out what the hell was going on in this country and the influence it was having, particularly on the freedom of the press and good information.”

His renewed interest in the economy left him appalled by “the extent of the economic stagnation that was taking place and that unfolded as that decade went on, from 2001 onwards, when Italy’s economic performance was 180th in the world.”

But the real roots of the torpor pre-dated the Berlusconi era by at least a couple of decades, he says.

“The first turn for the worst was really from 1970 onwards when a combination of industrial strife and a loss of macroeconomic stability – and loss of control of inflation – then was made worse by political strife: the ‘Years of Lead’ of the 1970s, with so much violence from the extreme left and the extreme right. That’s really when the rot set in.”

The decay, he says, was disguised by big increases in public spending and by the government running a ten percent of GDP budget deficit every year for 20 years. As the national debt swelled, the economy kept chugging along, but artificially – “a little bit like an athlete on steroids”.

IN PICTURES: Bill Emmott's views on Berlusconi, the Mafia, Fiat, and more

While blunt in its analysis of Italy’s deterioration, the film also serves as a rallying cry for Italians hoping to wake their country up. As a counterpoint to the ‘Bad Italy’ of crippling corruption, economic stagnation and the pervasive sin of ignavia, or lack of moral courage, Emmott and Piras showcase a ‘Good Italy’ of enterprising industrialists, irrepressible women and fearless anti-mafia fighters.

In some of the film’s most affecting scenes, Emmott speaks to talented exiles who have achieved success abroad but still hanker for home. Many of them are women fleeing a situation in which domestic opportunities remain very limited, a fact the filmmakers insist must change if the country is to get back on its feet.

In fact, Italy has fewer women in employment than most other European countries, while “the continued denigration and demeaning of women on television” shows that attitudes have scarcely budged.

“You can see in the treatment – on Twitter and television and in newspapers – of Laura Boldrini, the speaker of the chamber, that there’s a hell of a long way to go before there’s any substantive cultural change and acceptance that we’re in any kind of a new political era.

“But women have to keep on campaigning about it and standing up for themselves, as indeed Laura Boldrini is, in a very impressive way. I think it’s terrific that someone like her has stood up against it.”

He does not, however, expect the government to survive into 2014, with “traditional power games” between Letta’s Democratic Party (PD) and Berlusconi’s People of Freedom (PdL) likely to keep things brief.

Unless Letta’s party gets over the internal strife that partly explained its poor showing in February, Beppe Grillo, a former comedian whose party took 25 percent of the vote, could build further on his surprise result. And that might not be such a bad thing.

“If you look at it at a bigger political level you have to take the vote for the Five Star Movement as a positive sign of people waking up and demanding change but without yet a coherently positive recipe for change.”

Like Grillo’s party, the filmmakers have taken to social media in a bid to rouse Italy from her slumber. With a few months having passed since the film's release, Emmott is pleased with the response.

”It’s very viral. A lot of people are engaging and we hope to make this the beginning and not the end.”

Already the filmmakers are busy setting up a foundation as a vehicle through which they can pursue the educational use of Girlfriend in a Coma.

But for any lasting renaissance to occur, “it really depends on Italians themselves understanding the severity of the situation and then absolutely demanding change,” says Emmott.

Girlfriend in a Coma is available for purchase or rental from the film’s website. It can also be purchased in Italy from Il Fatto Quotidiano. In pictures: Bill Emmott's insights on Berlusconi, the Mafia, Fiat, and more.