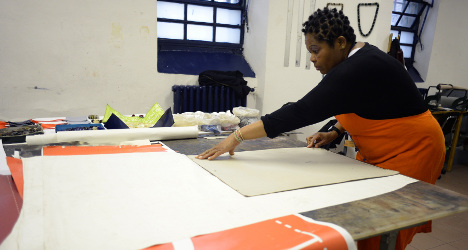 Nigerian detainee Kalu Uwaezuoke Chinedum Ike works on handbags at a workshop of Rebibbia prison in Rome in May. Photo: Andreas Solaro/AFP

The Sigillo (Seal) brand unveiled by the justice ministry this year will be available in the shops within months – a unique experiment that has given new energy to places like a handbag workshop at Rebibbia prison in Rome.

"When I get out I want to have a more normal, a calmer life. With this job I'm sure everything will be okay with me. I've learnt a lot here," said Kalu Uwaezuoke Chinedum Ike, a Nigerian facing drug trafficking charges.

The 40-year-old works three afternoons a week in a room with sewing machines, cutting tables and bars on the windows.

Rows of blue-doored cells can be seen from the workshop in what is Italy's biggest women's prison with more than 700 detainees.

After more than three years inside as she awaits the conclusion of her trial, Kalu has acquired a knack for stitching and beading.

"I've always been a person who likes dressing well, even when I didn't have enough to eat," she said, adding: "I have a real passion for it!"

Prisons in Italy are notoriously overcrowded, and funding has been repeatedly cut in recent years, making for what Justice Minister Annamaria Cancellieri recently called a penal system "that is not worthy of a civilized country".

There are a few exceptions – innovative projects like a theatre workshop, also at Rebibbia, whose performance of Shakespeare's "Julius Caesar" became the award-winning film "Caesar Must Die" released two years ago.

After three years of bureaucratic hurdles, promoters of Sigillo hope the project – which has 400,000 euros ($520,000) in funding from the justice ministry and 400,000 euros from charities – will be a similar success.

"The aim of the project is to give female detainees the tools to be in the marketplace once they are released," said Nanda Roscioli, a former justice ministry employee and consultant who has been involved from the start.

Roscioli said it is also a way of countering a prison system oriented towards male detainees in which women are a "subordinate" minority.

"As far as I know this programme is unique," she said.

Daniela Arronenzi, head of the Rebibbia workshop charity, said she signed up to the non-profit project because it would give prison-made garments access to a wider retail network and something resembling an actual fashion business.

"Of course, prison is a place of problems. There is overcrowding, there are budget cuts, but then there is also this," she said.

The initial plan is to hire 10 female detainees from workshops across the country and train 40 more who will produce under the Sigillo brand for big fashion names, as well as filling special orders for corporate marketing products.

The handbags made in Rebibbia sell for up to 40 euros each.

Supporters say the project is not exploitative because detainees will receive a regular part-time salary of 600 euros a month – comparable to their counterparts on the outside – and participation is voluntary.

Chinedum Ike and another member of the Rebibbia cooperative, Ukrainian detainee Natalya, currently receive around 150 euros, which they can send to family or spend on food and hygiene products in the prison.

The initiative is supported by Silvia Venturini Fendi, heiress of the Fendi fashion business, which is owned by French luxury giant LVMH.

For 33-year-old Natalya, who has been inside for three years, making handbags has little to do with glitzy catwalks or commercial success.

"For a time, we feel psychologically that we are not inside these walls. That's the reason for programmes like this. To switch off," said Natalya, who is also a proficient guitarist and pianist who plays at Sunday mass in the chapel.

"Sigillo is also about personal satisfaction. When we create things and they are sold, are appreciated, then we enjoy our work," Natalya said.

She added: "When I get out of here, I would like to open a shop."