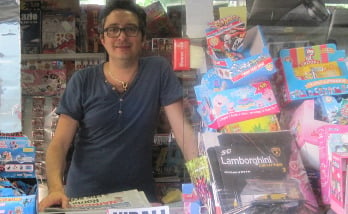 About a dozen or so magazines about the web, computers and other technological gadgets adorn the shelves of a newspaper stand owned by Giovanni Fiorelli.

However, demand for such glossies is low. Fiorelli puts it down mainly to the price of each – €5 on average – as well as such treats being one of the first things to go in times of financial strife.

But he also says Italians aren’t particularly interested in technology. His thoughts echo data which emerged yesterday from the EU's yearly digital agenda scoreboard saying 37 percent of Italians have never used the internet. Meanwhile, only 53 percent are regular web users, compared to the EU average of 70 percent.

Fiorelli does use the internet. He checks Facebook every now and then and has occasionally shopped on eBay.

He is not surprised by the numbers and believes the lacklustre take-up of the web is mainly due to Italy’s aging population.

Out of a population of over 61 million, about 20.3 percent are over the age of 65, according to figures from Italy’s National Institute of Statistics (Istat). The agency also predicts that the average age of the Italian resident will climb from 43.5 years to 49.8 years in 2059.

“They don’t know how to use it and aren’t interested. It’s mainly used by young people, they have it at home or on their phones; many of them have grown up with it so they’re used to it.”

Fiorelli also says the country’s poor internet infrastructure could have something to do with it, and more so than the cost.

“You sometimes see good deals for a high-speed network. But chances are your street won’t have access to that network.”

In May, students and entrepreneurs crammed into an ancient Venetian building for the annual Digital Economy Forum, an event organized by the American embassy to promote business and technological innovation in Italy.

General Federico Barilli, the secretary of Italia Startup, along with many others at the forum, felt the small numbers of those with web access is holding Italy back when it comes to technological development.

Barilli told The Local at the end of May that it’s not just a case of changing the law but also about “changing and modernizing the mentality of our country.”

Gennaro Giordano, a research scientist who recently returned to Italy after nine years in the United States, agrees.

He said progress towards the availability of wireless access in public areas, in particular, is slow.

“Compared to the US, there are few places where you can access Wi-Fi, although I’m starting to see more access points in parks,” he told The Local.

Giordano added that although some people might choose to forgo the internet to save cash, the cost of connection has actually become a lot more affordable, so price shouldn’t necessarily be a deterrent.

Sonia Mancini, a childcare worker in her 50s, says she rarely uses the internet.

“We have it at home but only my son uses it, but he keeps complaining it’s slow.”

Mancini doesn’t care much for the web but admits the country needs to advance more technologically.

“I see young people with these smartphones. For me, it is too much, but you can’t really ignore it.”

She perhaps speaks for the thousands of Italians who have so far managed to ignore one of the world’s greatest inventions when she says: “I prefer speaking to people face-to-face, never mind Facebook and the likes.”