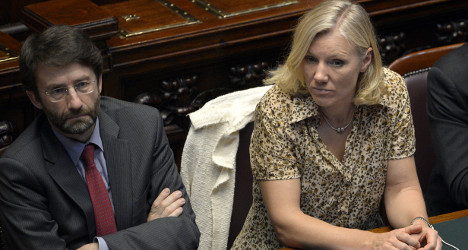 Idem's resignation was announced after a meeting with Prime Minister Enrico Letta, following publication by national media of the alleged tax evasion.

German-born Idem was put under the spotlight last week when news broke that local authorities were reportedly looking into the minister's tax payments.

La Stampa newspaper stated that Idem claimed a commercial gym she owns in the northern region of Emilia-Romagna was her principle residence until February 4th 2013. The family home was put under her husband's name, the newspaper alleged.

In response the far-right Northern League party called for Idem's resignation, while the head of the Five Star Movement, Nicola Morra, requested an explanation.

The former Olympic medallist joined Letta's cabinet in April and previously hit the headlines for attending Sicily's Gay Pride, along with Laura Boldrini, President of the Chamber of Deputies.