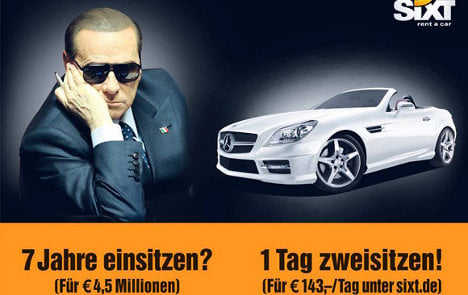 The ad ran in German newspapers on Wednesday. Photo: Sixt.de

Just days after Berlusconi was sentenced to seven years in prison amid reports he paid up to €4.5 million to the exotic dancer Karima El Mahroug, otherwise known as Ruby, Sixt worked up an ad playing on the conviction, which ran in German newspapers on Wednesday.

The ad shows a picture of Berlusconi, looking very Godfather-like in dark sunglasses, on the left-hand side, with the caption: "Alone for seven years in jail for €4.5 million?"  Alongside this is a picture of a sports car, with the slogan: "Or one day in a sporty two-seater for €143?"
German humour aside, this isn't the first time Berlusconi has been mocked in an ad campaign. The Indian subsidiary of Ford was forced to apologise in March for an ad showing Berlusconi with a group of women bound and gagged in the boot of a Ford Figo. Berlusconi was pictured in the driver's seat with the caption: "Leave your worries behind with Figo's extra-large boot".
Berlusconi is appealing Monday's verdict.