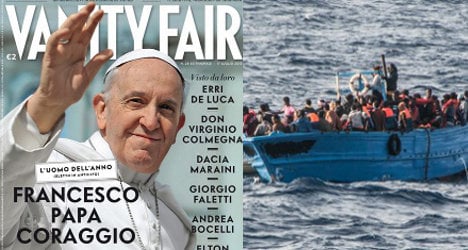 The Pope’s visit to Lampedusa on Monday, and his warning not to be complacent about the migrants who have died trying to reach the island, clinched the cover splash, entitled 'Man of the Year (elected in advance)'.

The headline reads “Brave Pope Francis”, and is followed by an extract from his speech on Monday:

“Who is crying over the deaths of these brothers and sisters? For these people who were on the boat? For these young mothers with children? For these fathers who are searching for a way to take care of their family? We ask the Lord for grace to cry on our indifference.”

Celebrities have been quick to endorse Pope Francis since his arrival at the Vatican in March. In a quote on Vanity Fair Italia's website, British singer Elton John said “Francis is a miracle of humility in an era of vanity…this Pope seems to want to bring the Church back to the ancient values of Christ while at the same time bringing it into the 21st century."

Pope Francis, who was born in Brazil but has an Italian father, is also proving extremely popular among other Italians.

Laura Fada, who runs a restaurant close to the Vatican, recently told The Local that the Pope “has charisma” and “he feels like one of us.”

Could there be something about Pope Francis you don't know about? Take a look at our list to find out:  https://www.thelocal.it/galleries/news/pope-francis-ten-things-you-didnt-know