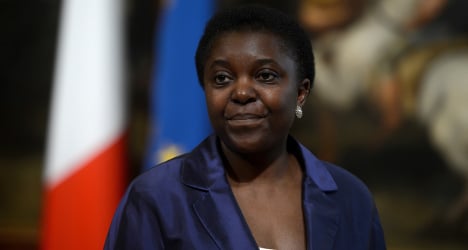 People "should debate with ideas, not with insults, even when they have different ideas," Kyenge, who is minister for integration, told reporters.

"These attacks hurt me but also hurt the civil conscience of the majority of this country," said Kyenge, an eye doctor born in the Democratic Republic of Congo who is now an Italian citizen.

Kyenge, 48, has so far played down the onslaught, including being likened to an orangutan by senior party member and Senate deputy speaker Roberto Calderoli.

But on Tuesday she appealed directly to the leader of the Northern League, Roberto Maroni, who is also governor of the Lombardi region, to end the racism.

She said that otherwise she would not take part in a conference with the Northern League this week.

"I feel I can respect this engagement only if Maroni appeals to his activists to immediately cease their continual attacks against me," she said.

Kyenge had bananas thrown at her at a political rally on Saturday, and far-right militants hung nooses in a town where she was due to speak earlier this month.

Racism is common in Italy, where large-scale immigration is still a relatively recent phenomenon.

The Northern League has a small but vociferous support base, and most of Italy's mainstream political forces have condemned the insults directed at Kyenge.