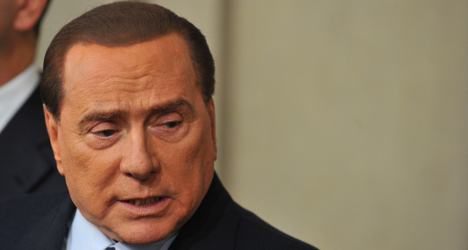 Italy's highest court is due to rule on an appeal by the playboy billionaire tycoon against a tax fraud conviction in a case that first went to trial in 2006.

Berlusconi at his last appeal was given a sentence of a year in prison and a five-year ban from parliament, which has been suspended pending this final appeal.

Berlusconi's lawyer Niccolo Ghedini said the ruling could come later on Wednesday after the defence presents its final arguments to the panel of judges.

But chief judge Antonio Esposito said the panel could also begin its deliberations later on Wednesday, then adjourn and only deliver its conclusion on Thursday.

Another one of Berlusconi's lawyers, Fausto Coppi, said the three-time former prime minister was "not going to show up" for the sentencing.

"He has no reason to be here," Coppi said.

At the start of the hearings on Tuesday, prosecutor Antonio Mura accused Berlusconi of being the "mind behind the tax fraud mechanism" at Mediaset.

Mura asked for the prison term to be confirmed but said the ban from public office should be limited to a maximum of three years instead of five.

If the verdict is upheld, the Senate would still have to vote for the sentence to be implemented — a procedure that could take several months.

It would be Berlusconi's first definitive conviction in 20 years of legal woes and sex scandals in which he has always either been acquitted or seen charges expired under a statute of limitations.

In other cases, he is appealing against convictions for having sex with an underage prostitute, abusing his powers as prime minister and leaking a police wiretap to damage a political rival.

Berlusconi, 76, is highly unlikely in any case to face actual prison time because of lenient sentencing guidelines for elderly people in Italy.

He could, however, be put under house arrest at his villa near Milan or be sentenced to community service.

The ban from parliament would also not necessarily cast him out from the political arena and he could stay on as a figurehead leader of the centre-right.

Berlusconi could also be acquitted or the judges could decide to send the case back to the appeal courts, a decision which would probably mean the charges expiring before that trial ends.

Whatever the result of the trial, Italians are concerned about the effect it could have on a right-left coalition formed following a two-month deadlock after a general election in February.

Berlusconi has repeatedly said the ruling should have no impact on the government, a sentiment echoed by centre-left Prime Minister Enrico Letta.

But diehard Berlusconi fans are threatening a mass walkout from parliament – a move which could trigger fresh elections in the recession-hit country just as it was beginning to enjoy greater market confidence.

Berlusconi has been often written off in the past and many analysts had predicted his demise in 2011 when he was dramatically ousted from power in a blaze of sex scandals, party defections and financial panic.

But he staged an impressive comeback in this year's elections, with his coalition coming a close second to the centre-left with nearly a third of the vote.