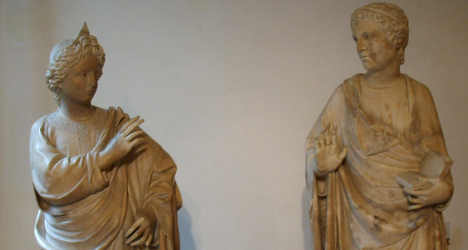 The broken statue (R) before the little finger was broken off the right hand. Photo: sailko/Wikicommons

A museum guard spotted the tourist approaching the statue to take a right hand's measurement, but intervened too late, Firenze Today reported.

The tourist apologized for the accident but may still be charged for the damage.

The statue is part of a group by Florentine Giovanni d’Ambrogio, a sculptor during the 14th and 15th centuries.

The damage is currently being evaluated by experts, although the museum’s director said repairing the sculpture would be challenging.

“The damaged finger…is not original but was recast in other periods,” Timothy Verdon, from the US, told Firenze Today.

Verdon also lambasted the behaviour of museum visitors in general: “In a globalized world like ours, the fundamental rules for visiting a museum have been forgotten – that is to 'not touch the works'.”

The city’s historical centre has UNESCO World Heritage status and is praised by the international organization for its “600 years of extraordinary artistic activity”.

A number of Florence’s most prized statues have been replaced with copies, while originals still standing are watched over by police.